?Eden Hazard will not be available to face Atlético Madrid in the Derbi Madrileño this weekend, despite earlier hopes over his return to fitness.

The Belgian star has not had a dream debut season for Real Madrid, since his big-money summer transfer from Chelsea last summer.

Hazard – who? admitted to struggling with his weight after returning from the summer break – has scored just once in 13 outings for ?Madrid so far. A testing introduction was then made all the more difficult after he picked up an ankle injury the Champions League outing against Paris Saint-Germain on 26 November. Sidelined for the last two months, ?reports had claimed that there was hope that Hazard might be able to make at least a cameo against Atlético on Saturday 1 February.

However, ?AS now claim that after ’58 days without touching the ball’, Madrid are taking no risks with Hazard’s progress. While he has now begun individual ball work training, it is noted that he is yet to rejoin the group and will not be involved in the derby at the weekend.

Instead, a new target date for Hazard’s return to action has been set; 26 February and the Champions League last 16 encounter with Premier League champions Manchester City. The second leg is scheduled to take place at the Etihad Stadium on 17 March.

In Hazard’s absence, Madrid have coped surprisingly well and have leapfrogged Barcelona at the top of the table. 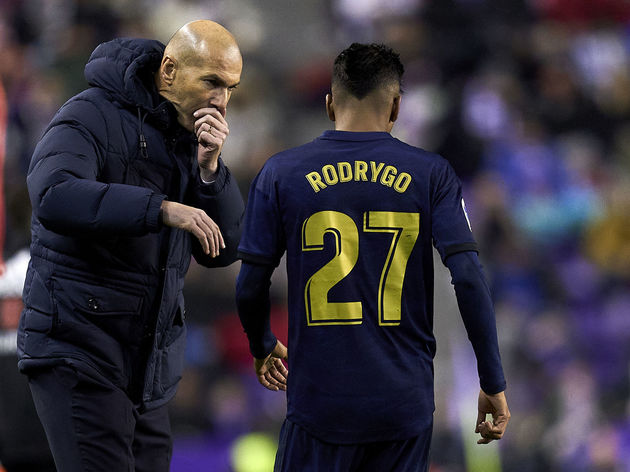 Unbeaten in all competitions since October, Zinedine Zidane has relied on any combination of Vinicius Junior, Rodrygo, Gareth Bale, Lucas Vazquez and Isco in the attacking wide positions, either side of mainstay Karim Benzema.

However, despite the fact that Los Blancos sit top of La Liga, three points clear of Barcelona after 21 games, no player other than Benzema (12) has scored more than three goals in La Liga this season – highlighting a need for further attacking end product.