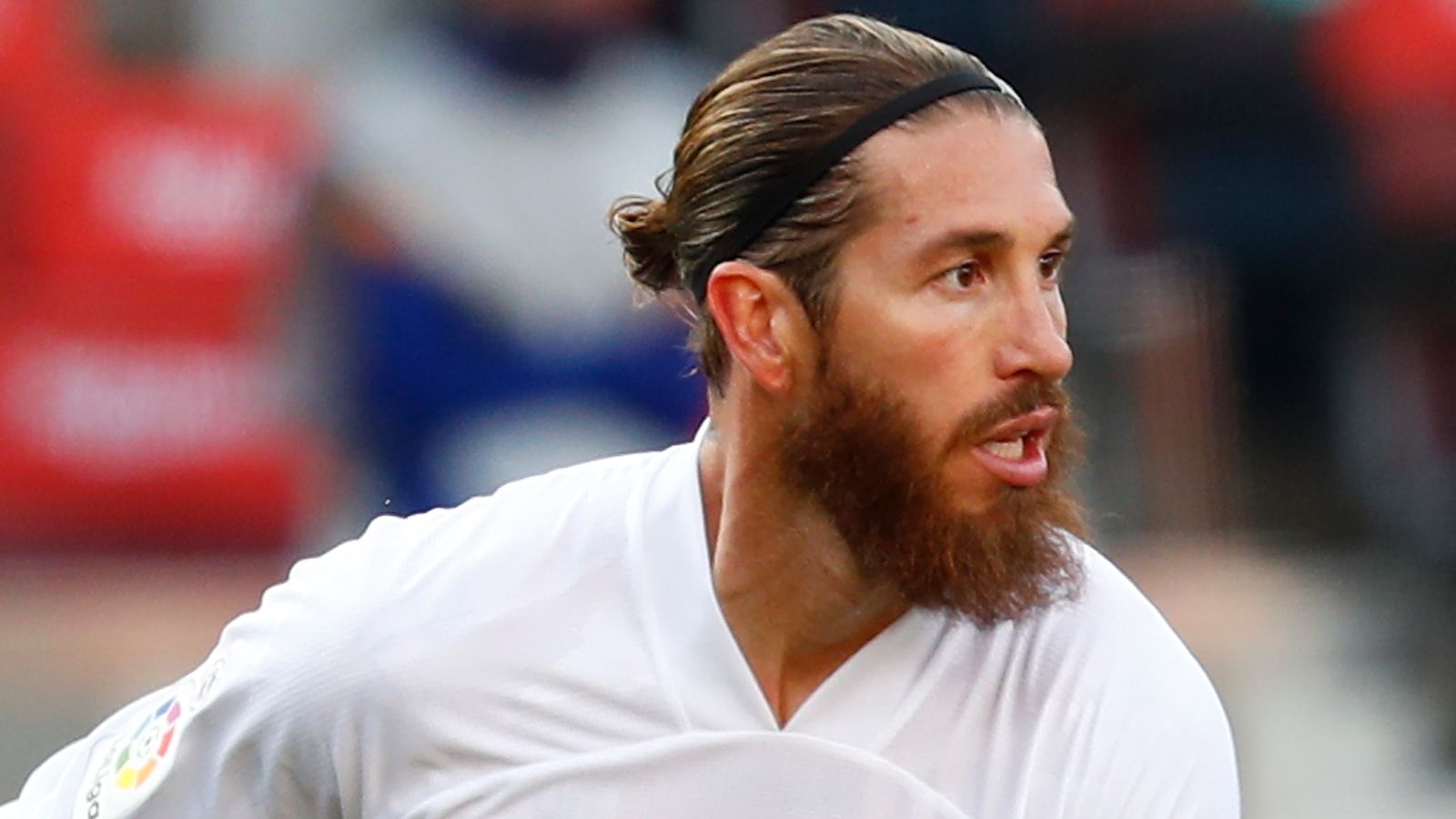 Real Madrid captain Sergio Ramos is set for a spell on the sidelines after successfully undergoing surgery to his left knee on Saturday.

The 34-year-old had missed Real’s last two La Liga outings against Alaves and Levante with a torn meniscus, as well as their Copa del Rey exit to third-tier side CD Alcoyano.

He returned to training after over two weeks out, but decided to go under the knife after advice from the Real medical staff in order to fix the issue and return to full fitness.

Reports in Spain on Saturday morning suggested he could be out for six to eight weeks, therefore missing Real’s Champions League round-of-16 tie against Atalanta on February 24 and the Madrid derby on March 7.

“Our captain Sergio Ramos successfully underwent an operation today for an injury to the internal meniscus of his left knee,” a Real Madrid statement read on Saturday.

“The surgery was carried out by Dr. Manuel Leyes, under the supervision of the Real Madrid medical staff. Sergio Ramos will begin the recovery process in the next few days.”

Ramos’ contract at the Santiago Bernabeu runs out in the summer and there is no indication he is due to sign a new deal just yet, prompting speculation over his next move.

This week, Real also confirmed Eden Hazard has suffered another injury and is set to be out for up to six weeks with a thigh problem.

It is another blow for Real Madrid’s hopes of a La Liga title defence, as they remain in third position, 10 points behind city rivals Atletico Madrid, who also have a game in hand.

Real Madrid forward Eden Hazard has suffered yet another injury and is set to be out for up to six weeks with a thigh problem.

Real said in a statement on Wednesday that Hazard had injured a muscle in his left thigh following the day’s training session, which Spanish media said he was unable to complete.

The Belgian had missed the previous day’s session with muscle fatigue and has endured a torrid campaign overall, blighted by fitness issues.

Real did not state for how long Hazard, 30, would be out although Spanish newspaper Marca indicated he would be sidelined for between four and six weeks.

He is ruled out of Saturday’s La Liga trip to Huesca and Tuesday’s home game with Getafe while he is almost certain to miss the Champions League last-16 first leg game at Atalanta on February 24 and their trip to league leaders Atletico Madrid on March 7.

Hazard, who joined Real from Chelsea for a club record 100 million euros in 2019, had his first season disrupted by two major ankle injuries and has had three separate spells on the sidelines this campaign.

He missed six weeks at the start of the season with an ankle injury and then was forced to miss two weeks in November after testing positive for Covid-19.

His return from the virus barely lasted 10 days due to a hamstring injury which saw him wait six weeks for his next Real start, away to Osasuna on January 9.

He showed signs of his ability with a goal and impressive individual performance in a 4-1 win at Alaves later in January but hopes of a full return to form have been dealt a fresh blow with this latest muscle injury.

Hazard has made only six La Liga starts this season and has only completed 90 minutes in one league match.

Also on Wednesday, Real captain Sergio Ramos returned to full training after over two weeks out with a knee injury. Barcelona and Real Madrid’s women’s teams staged a protest before Sunday’s El Clasico between the sides in the Spanish league to demand better COVID-19 protocols.

Both sets of players stood motionless for a few seconds after the initial whistle to send a message to the Spanish soccer federation.

Several women’s games have been postponed because of the coronavirus pandemic in Spain, including five for league leaders Barcelona.

The players have been calling for more efficient measures to protect the athletes and the competition.

The Catalan club have a two-point lead over second-place Levante. Real Madrid, in their first season with a women’s team, sit third.

Barcelona have three games in hand compared to Levante and Real Madrid.

Spain has been one of the countries hit the hardest by the pandemic in Europe.

The home side were reduced to 10 men after just nine minutes when defender Eder Militao was shown a straight red card.

Real remain seven points behind city rivals Atletico Madrid who travel to Cadiz on Sunday with two games in hand.

But they faced an uphill task when Militao was given his marching orders after he brought down Sergio Leon.

A delightful pass from Toni Kroos sent Asensio away and his cool finish put the hosts into the lead four minutes after Militao’s dismissal.

But the visitors were undeterred by Real’s opener and, following a number of chances at both ends, Morales netted past Thibaut Courtois with 32 minutes played.

Marti then had the opportunity to put Levante into the lead but his penalty kick was saved by Courtois shortly after the hour mark.

However, Marti made amends when he converted Enis Bardhi’s pass with 78 minutes played to give Levante all three points.

Meanwhile, Sevilla eased to a 2-0 win at Eibar to move ahead of Barcelona and into third place, one point behind Madrid.

Lucas Ocampos opened the scoring for the visitors in the 28th from the penalty spot after Pedro Bigas fouled Youssef En-Nesyri.

After Joan Jordan tapped in Sevilla’s second goal in the 55th, Eibar goalkeeper Marko Dmitrovic asked to be substituted and spent the rest of the match in the stands with his left leg propped up.

Bundesliga top-scorer Robert Lewandowski took his tally to 24 goals and had an assist as Bayern Munich stretched their lead to 10 points with a 4-1 win over Hoffenheim.

Jerome Boateng opened the scoring with a header in the 32nd minute, before Lewandowski set up Thomas Muller in the 43rd.

Andrej Kramaric pulled one back a minute later for Hoffenheim, but Lewandowski scored for the ninth consecutive game in the 57th minute, and Serge Gnabry made sure with Bayern’s fourth just past the hour-mark.

Elsewhere, Borussia Dortmund ended their three-game winless run with a 3-1 victory over Augsburg.

Dortmund coach Edin Terzic made three changes to the team that lost 4-2 to Gladbach, with goalkeeper Marwin Hitz coming in for the injured Roman Burki, who was heavily criticised for his performance in the Gladbach defeat.

But Hitz was picking the ball out of his net in the 10th minute when Andre Hahn fired the visitors in front.

Erling Haaland struck his penalty off the crossbar in the 21st minute and Rafa Gikiewicz saved his header two minutes later, but Thomas Delaney finally made the home side’s pressure count when he headed in the equaliser in the 26th minute.

Jadon Sancho scored in the 63rd minute and an own goal from Felix Uduokhai in the 75th extended the lead.

AC Milan got back to winning ways in Serie A with a 2-1 victory at Bologna, with goalkeeper Gianluigi Donnarumma in fine form to help his side open up a five-point lead at the top of the standings.

Zlatan Ibrahimovic missed the chance to put the leaders ahead when his spot-kick was saved in the 26th minute, but Ante Rebic latched on to the rebound to fire home.

Bologna had three glorious chances to level before the end of the first half, but were denied by some brilliant saves from Donnarumma.

Those stops proved crucial as Milan were awarded another penalty in the 55th minute. Franck Kessie converted from the spot to double his side’s lead.

Substitute Andrea Poli got one back for the hosts in the 81st minute, but they could not find an equaliser despite plenty of late pressure.

Meanwhile, Federico Chiesa scored for the second straight match for Juventus as the champions won 2-0 at Sampdoria.

The 23-year-old Chiesa finished off a well-worked team move in the 20th minute. Cristiano Ronaldo picked out lvaro Morata on the right flank and he rolled the ball across for Chiesa to tap it into the back of the net.

Aaron Ramsey doubled Juventus’s lead in stoppage time in another move started by Ronaldo. Ramsey had only come on as a substitute in the 83rd minute.

Arsenal have completed the signing of Martin Odegaard on loan from Real Madrid until the end of the season.

The 22-year-old midfielder made it clear he wanted to leave in January in order to play regular first-team football, having played just nine times in all competitions for Real Madrid this season.

Mikel Arteta will be able to call upon Odegaard for Saturday’s clash with Manchester United, live on Sky Sports, with Odegaard to wear the number 11 shirt at the Emirates.

Odegaard’s decision to move to the Premier League was aided by a chat with the Arsenal manager.

“I spoke to him (Arteta) before coming here, of course,” Odegaard told Arsenal’s website. “That was very important for me and he seems like a top manager and I liked his ideas, the way he sees football and also the way he is.

“He gave me a great feeling and that was important for me to come here. He was crucial.

Arteta said: “It’s great that we’ve secured Martin to come to us until the end of the season. Martin is of course a player that we all know very well and although still young, he has been playing at the top level for a while. Martin will provide us with quality offensive options and we’re all excited to be integrating him into our plans between now and May.”

Real Sociedad were keen on re-signing Odegaard following his season-long loan stint last year, but it is thought Real Madrid’s preference was to send him to a club outside La Liga.

Odegaard registered seven goals and nine assists across 36 appearances on loan at Sociedad last season, leading Real Madrid to cut short his two-year loan and make him part of their first-team squad.

A number of Premier League clubs were also interested in Odegaard, including Leicester, although the Foxes opted not to pursue the Norway international after preliminary discussions.

What will one-time wonderkid Odegaard bring to the Premier League?

What will Odegaard bring to the Premier League? Well, hype, hope and a lot of media attention for starters.

The attention of the footballing world was centred on him in 2015 when, a month after his 16th birthday, Real Madrid won the race for his signature – and the interest in the now 22-year-old is set to ignite again.

Already a Norway international when he joined Real, Odegaard – who had drawn excitable comparisons with Lionel Messi – immediately began training with the first team and became the club’s youngest-ever player in the final game of that season.

Back then, the anticipation of what Odegaard would become at the Bernabeu knew no bounds – but his progress, perhaps disappointingly for some, has been quieter since, as the gradual progression of a midfield technician has taken shape.

Patience is paying off now, though. After an underwhelming 18-month loan spell at Heerenveen, Odegaard had a standout season at Vitesse in 2018/19, creating more chances than any other player in the Dutch top flight, and finishing third in the assists chart to Dusan Tadic and Hakim Ziyech.

He backed it up with an impressive season at Real Sociedad last year, when he hit double figures for goal contributions, and was recalled to Real Madrid as a result.

While a way into Zinedine Zidane’s line-up has ultimately been hard to find, Arsenal have landed a classy creator, a pass-master and an attacking midfielder with a fine touch and bright awareness of the game.

Odegaard will bring excitement on the pitch as well as off it.

The winter transfer window is open until Monday, February 1 at 11pm.

Follow all the news and analysis on Sky Sports News and across Sky Sports‘ digital platforms, including our dedicated Transfer Centre blog.