Real Madrid came from behind to beat Mallorca 4-1 at the Bernabeu in La Liga on Sunday and continue their perfect start to the season.

A solo effort from Federico Valverde on the stroke of half-time levelled the scores after Vedat Muqiri had stunned the home crowd by nodding the visitors ahead. Vinicius Jr put the hosts in front before Rodrygo and Antonio Rudiger completed the rout.

Real returned to the top of the table, two points ahead of second-placed Barcelona.

A much-changed Real initially struggled to gain a foothold and sorely missed injured talisman Karim Benzema in attack throughout a below-par first half.

Muqiri, who was denied by Thibaut Courtois inside the opening 40 seconds, headed in unmarked at the back post after 35 minutes and it appeared the champions would go in trailing at the break for the first time this campaign.

That changed, however, in added time at the end of the half when Valverde ran the length of the pitch before firing home a left-footed shot from the edge of the box.

After the break the hosts monopolised the ball, but were fortunate when Antonio Sanchez fired wide from six yards out with the goal gaping on a rare foray forward from the Balearic Islanders.

Rodrygo’s mazy run fed Vinicius 18 minutes from time and the Brazilian forward netted for a fifth consecutive game to put Carlo Ancelotti’s side in front, before Rodrygo, who capped off a delightful run with a perfect finish, and a first goal in Madrid colours for Rudiger added late gloss to the scoreline.

Union Berlin top of Bundesliga for first time in history

Union Berlin went top of the Bundesliga for the first time in their history thanks to a 1-0 victory at Cologne.

An early own goal by Timo Hubers was enough to reach the summit, although they squandered the chance to double the lead soon after when goalkeeper Marvin Schwabe saved Jordan Siebatcheu’s penalty.

Cologne’s Luca Kilian was sent off for a second yellow card nine minutes from time.

Union’s place at the top was secure after Freiburg had to settle for second place following a goalless draw at home to Borussia Monchengladbach. 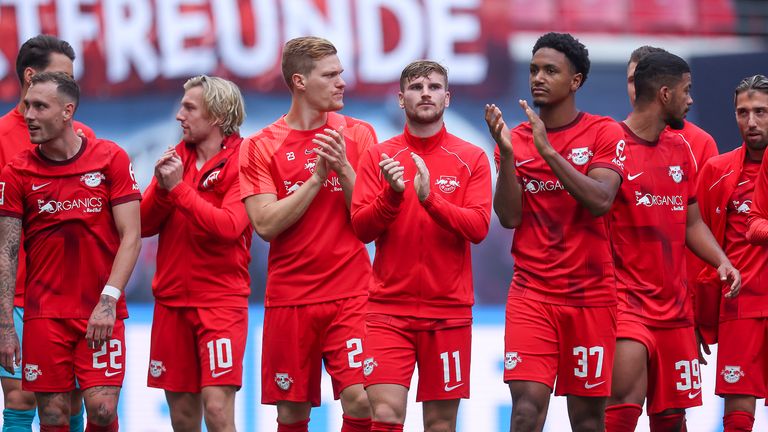 Highlights of the Bundesliga match between RB Leipzig and Borussia Dortmund. Highlights of the Bundesliga match between Bayern Munich and VfB Stuttgart at the Allianz Arena.