Kylian Mbappe says he is undecided about his future as he enters the final five months of his Paris Saint-Germain contract. Sky Sports assesses what his next step might be…

Mbappe, 23, scored a stoppage-time winner for the French club in Tuesday night’s Champions League last 16 first-leg against Real Madrid at the Parc des Princes, in a game that was billed as his audition for Los Blancos.

Real are favourites to sign him on a free transfer in the summer after PSG rejected their £135m bid for the forward last August, despite him being in the final 12 months of his contract.

But when Mbappe faced the inevitable questions on his future after Tuesday night’s game, he insisted he was biding his time before making a call on whether to remain in Paris or leave in the summer.

“No, I’ve not decided,” he replied. “I give my best, and then we will see what happens next season.”

Mbappe, who has 22 goals and 16 assists in all competitions for PSG this season, is expected by many to move to Real on a free transfer at the end of this campaign, having so far resisted to sign a new deal with the Parisian club.

“How to ignore the (transfer) context? It’s easy, you have to play football,” Mbappe told broadcaster Canal Plus.

“We ask too many questions, we say too many things. We talk about PSG and Real, two big clubs.

Ancelotti: Mbappe is the best player in Europe

Real Madrid head coach Carlo Ancelotti did little to hide his admiration for Mbappe after the Frenchman secured the victory for PSG on Tuesday night, giving them a one-goal lead heading into the second leg.

“Mbappe is the best player in European football,” Ancelotti said.

“Mbappe is unstoppable, we have tried to control him. Eder Militao has done very well, but he is a player who always invents something.”

Before the game, Real striker Karim Benzema angered PSG fans with his comments on Mbappe, openly discussing the possibility of his France team-mate joining him in Madrid.

“Playing against Kylian is special because we play in the national side together,” said Benzema. “Everyone knows that one day he could arrive at Madrid, but the most important thing is to play this game first and win it.” 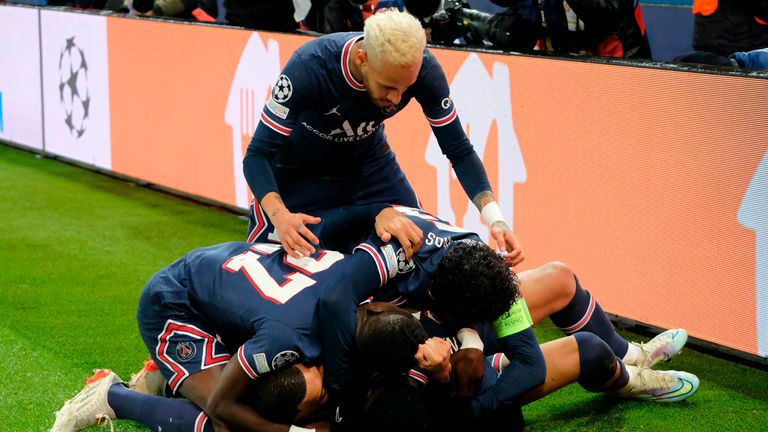 French football expert says Kylian Mbappe’s future is still up in the air after the PSG superstar scored their winning goal against suitors Real Madrid.

French Football journalist Jonathan Johnson has told Sky Sports News he expects Mbappe to keep everyone guessing about his future until the end of the season.

Mbappe told PSG of his desire to leave in July amid interest from Real Madrid, but after the move broke down he has been more vague about his plans for the future.

Real have been able to sign him on a pre-contract agreement since January, but have not come to an agreement publicly on a deal. Meanwhile, Mbappe has resisted contract offers from PSG.

The France international followed that same script in front of the world’s press on Tuesday night, leaving his future up in the air.

“He answered questions post-match in French, English and Spanish, so keeping his cards close to his chest, going to great lengths to say that no decision has been taken on his future,” Johnson told Sky Sports News.

“There have been reports in recent weeks that have been shot down by his entourage, and he is basically saying that he is keeping his options open until the end of the season.”

Despite Real appearing to be in pole position to sign Mbappe, Johnson is still holding out hope that Mbappe will elect to remain in France with PSG for a few more years.

“It’s a really difficult one to call because there are pros and cons to staying at PSG or moving to a club like Real Madrid.

“Personally, as someone who lives, loves and works the French game, I’d love to see him stay around for a bit longer. So I guess I’m bias in saying that I think he will be in France next season.”

Al-Khelaifi: PSG barely have a relationship with Real Madrid

In the build up to Tuesday’s Champions League last 16 first-leg, PSG president Nasser Al-Khelaifi was clear that their relationship with Real Madrid is virtually non-existent.

While he didn’t mention Mbappe, it was clear that Real’s public pursuit of their prized asset since last summer has ruffled some feathers at PSG.

“I’m not going to hide it, we barely have any relationship with Real Madrid,” Al-Khelaifi told Canal Plus in France.

“I’m not going to remind you what happened… I believe in football being accessible for smaller clubs; they don’t think the same.”

PSG shocked many last summer by rejecting a bid of around £135m for a player that was out of contract in 12 months.

But it comes down to a matter of principle for the French club, who have refused to sell any of their star players to rival clubs since being taken over by Qatar Sport Investment (QSI).

The Qatari owners want to establish PSG as one of Europe’s super clubs and have the financial might to swallow any offers that come their way.

The likes of Thiago Silva, Edinson Cavani and Zlatan Ibrahimovic have all been allowed to leave at the end of their contracts, but they were players in the latter stages of their career that PSG were happy to move on from.

A few years ago it was Neymar trying to force his way out, but PSG were resolute when Real Madrid and Barcelona showed interest. The Brazilian ended up deciding to stay in Paris and signed a new deal.

Whether Mbappe will perform a similar U-turn before the end of the season remains to be seen, but even if he does leave, PSG will have sent a strong message that they are not a selling club – at any price.