Sheriff Tiraspol pulled off an enormous shock as they won 2-1 at Real Madrid to make it two wins out of two in Champions League Group D with a late strike from Sebastien Thill.

Jasur Jakhshibaev headed the Moldovan side into the lead in the 25th minute, but Los Blancos were level through a second-half penalty from Karim Benzema, given following a VAR review.

The visitors, though, snatched all three points with just a minute left when Thill drove the ball into the top corner from 20 yards to leave the Bernabeu in stunned silence.

Real had 31 shots on goal and 11 on target while keeping 76 per cent of possession and winning 13 corners; the Moldovan side had only four attempts, scoring two of their three shots on target and failing to win a single corner.

“Everything went well for them while everything we did turned out badly,” Real manager Carlo Ancelotti told reporters after his side’s first defeat of the season.

“More than worried, we are sad. We played with intensity and commitment but lost due to the finest details. The team played well, we could have been sharper in the area but it’s difficult to explain what happened. 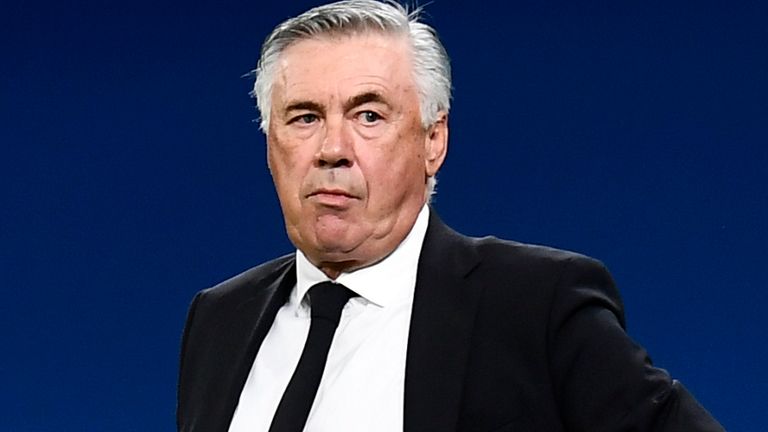 “The small details cost us the game and we should learn from that in the future. But this was a defeat we did not deserve.”

Earlier, newly-crowned heavyweight world champion Oleksandr Usyk was watching in the stands as Shakhtar Donetsk and Inter Milan played out a goalless draw at the Olympic Stadium in Kiev.

‘This is so emotional’

Sheriff, who were founded in 1997 from the unrecognised breakaway state of Transnistria, are top of Group D with six points, after beating Shakhtar Donetsk 2-0 in their opening game.

Before kick-off the club had a mere 6,000 followers on Twitter, contrasting with Real’s army of over 38 million on the social media platform.

“This is so emotional. I’m very appreciative of my boys for this great job,” Sheriff boss Yuriy Vernydub said. “We are a real team. 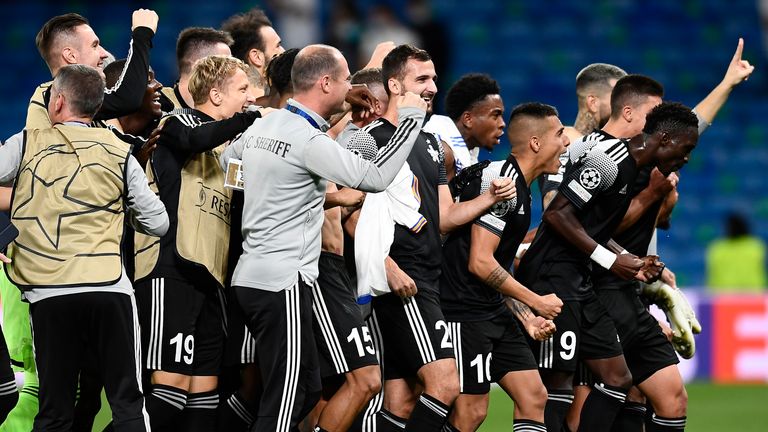 “Some big players said before there’s no place in the Champions League for teams like Sheriff, but it’s our place and we proved it.

Sheriff defender Gustavo Dulanto added: “I dreamed of winning in the Bernabeu, I have always followed Madrid they are the most successful team in the Champions League so to beat them at home is a huge achievement.

“There’s still a long way to go and we can’t relax because there’s no logic in football, as today’s result shows. We came here with the knife between our teeth but we can only look forward to the next game.”

Who are Sheriff Tiraspol?

Captain Frank Castaneda revealed his side had fancied their chances before kickoff.

“We knew we could win here and before the game we had it in our heads that we could and as captain I tried to motivate the team and tell them we could do it because this is football,” he said.

“Real Madrid is an historic team but on the pitch it’s 11 players versus 11 and we came here to get the victory and got it.”

This was just the third ever away victory by a Moldovan team in a major European competition, following Zimbru Chisinau in the UEFA Cup in 1995 (v RAF Jelgava) and Sheriff themselves in the Europa League in 2017 (v Lokomotiv Moscow).

Ajax maintained their 100 per cent start to Group C with a 2-0 win over Besiktas at the Johan Cruyff ArenA.

Steven Berghuis set Ajax on their way before Sebastien Haller continued his sensational scoring streak with his fifth Champions League goal of the season before half-time.

5 – Ajax striker Sébastien Haller has now scored five goals in the UEFA Champions League; the most ever by a player in his first two appearances in the competition. Famous. pic.twitter.com/A6PpSBpVzp

Lionel Messi scored his first goal for Paris Saint-Germain to help secure a 2-0 win over Manchester City in their Champions League clash at the Parc des Princes.

PSG took an early lead in the seventh minute when City failed to clear a cross into the box and Idrissa Gueye smashed the ball into the top corner.

City responded as Raheem Sterling headed against the crossbar, before Bernardo Silva fired the loose ball back up onto the bar when it looked certain he would score.

Messi, back following a knee problem, capped a fine all-round display when he played a one-two with Kylian Mbappe on the edge of the penalty area and clipped a wonderful finish into the top corner.

PSG move top of Group A, with City down to third after Club Brugge won 2-1 at RB Leipzig.

Christopher Nkunku put the Bundesliga side ahead in the fifth minute from close range, with the goal given following a lengthy VAR review.

In the 22nd minute, Brugge captain Hans Vanaken saw an equaliser ruled out for offside after the hosts had been caught trying to play out from the back – only for VAR to swiftly overturn the decision.

The Belgians turned things around when they took the lead five minutes before half-time when Mats Rits knocked a loose ball in from six yards.

Liverpool took control of Group B as they ran out 5-1 winners at Porto.

Mohamed Salah put the Premier League side ahead in the 18th minute when he bundled the ball in after Curtis Jones’ angled drive from the left had been pushed out by the ‘keeper.

Sadio Mane tapped home a second just ahead of half-time after James Milner’s cross from the right went right through the six-yard box. Salah added a second just after the hour after being set up by Curtis Jones.

Mehdi Taremi pulled one back for the hosts, only for Roberto Firmino to roll in a fourth on the break after goalkeeper Diogo Costa was caught upfield and could only race back to scoop the ball out from behind the line. The Brazilian added a fifth when tucking in a rebound.

At the San Siro, Luis Suarez netted a stoppage-time penalty as Atletico Madrid came from behind to win 2-1 against AC Milan, who had Franck Kessie sent off in the first half.

The Serie A side were rewarded for a positive start when Rafael Leao drilled in a low shot from the edge of the penalty area in the 20th minute.

Milan, though, were reduced to 10 men just nine minutes later when midfielder Kessie was dismissed for a second caution.

Antoine Griezmann finally levelled things up with six minutes left with a well-taken volley and Suarez had the last word when his scuffed spot-kick squirmed past Mike Maignan.