t is customary to…well, celebrate them a bit. Generally be nice. Here at 90min, it’s no different so, on Fernando Morientes’ 44th birthday, it is only right to honour the former Real Madrid and Spain frontman.

If you’re a Premier League aficionado, you might be focussed on the 18 unsuccessful months he spent on Merseyside, but the Madrista frontman enjoyed eight sparkling seasons at the Bernabéu

In a brilliant 17-year career, Morientes played for eight clubs across Europe and plundered 235 goals for club and country.

?In the 2001/02 season, lowly U.D Las Palmas visited the Santiago Bernabéu in February. Surprisingly, the Canary Islands club had beaten ?Los Merengues 4-2 earlier in the season and it’s safe to say that Madrid were hungry for revenge.

They were successful in enacting that revenge, running out 7-0 winners. Morientes grabbed five goals – four with his head – as Las Palmas had absolutely no answer.

Moro at his finest.

Real Madrid won the Champions League in 2000 beating Valencia 3-0 in the final. Morientes, McManaman and Raul the scorers. pic.twitter.com/9fHC1NncUK

Even though Morientes has said that his favourite ?Champions League success was his first, breaking Real’s long-anticipated wait for European glory, his performance in 2000 was more impactful.

Squaring off in an all-Spanish affair against Valencia, ?Real Madrid were considered strong favourites against Héctor Cúper’s side. In a convincing 3-0 win, Morientes stamped his impact on the game with the first goal.

In the 29th minute, Nicolas Anelka’s byline cross didn’t make it past the first man, but a battling Míchel Salgado nipped in to win it back. A scooped cross from the right-back was sent to the back post, where the lethal Moro is waiting to head in.

Real Madrid would never look back, and a scissor kick from Steve McManaman would eventually steal the headlines, but it was Morientes who had sent them on their way.

Some players just have the knack in particular competitions. Luckily for Morientes, it was the ?Champions League. With the Galacticos era in full swing in 2003, he was deemed surplus to requirements and was loaned to Monaco.

Fernando was less than happy about the move and got the opportunity for Real Madrid’s upper management to rue that decision later in the season, as the

Revenge can be so sweet. 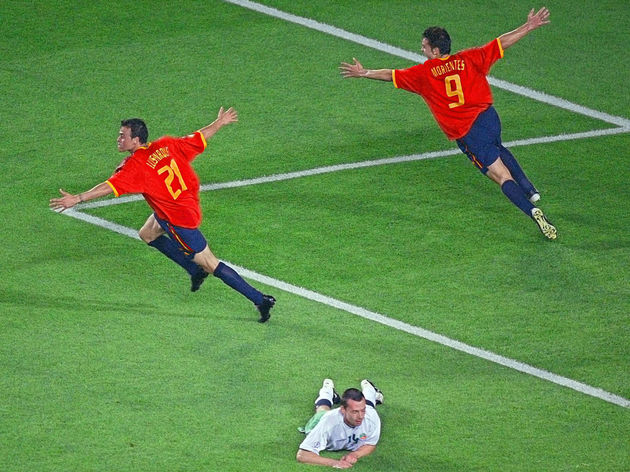 Fernando pulled on the Spain shirt 47 times and took his opportunity with both hands; Morientes is the fifth all-time goalscorer for his country.

The 2002 Spain side were the most complete Morientes played with and they looked set to reach the nation’s first World Cup semi-final – but Egyptian referee Gamal Al-Ghandour constantly gave big decisions against them in their quarter-final against hosts South Korea, and the Spaniards were knocked out on penalties.