With Liverpool rumoured to be shopping for a new centre back in the summer, attention has intensified as to who might they be targeting.

The latest name ?said to be on their watchlist is Diego Carlos. Only joining Sevilla last summer, the Brazilian has already established himself as one of the best defenders in La Liga.

However, the current Premier League leaders aren’t the only team interested in the 27-year-old. Barcelona and Real Madrid have also been impressed by his displays and are each considering making a bid for the former Nantes man. It could make for an three-way battle to sign him, which could make for an exciting transfer window this summer.

Here are seven things you need to know about Carlos. Upon first glance, Carlos is a pretty imposing defender.

The 6’1 tall centre back is strong and very good in the air, winning 58% of his aerial duels during this league season. He’s also got a tackling success rate of ?79%, which is higher than the likes of Harry Maguire and Joe Gomez for this league campaign.

By using his physique to win the ball effectively, the Brazilian is able to nullify opposing attackers efficiently, and is equally adept at defending against rapid counter-attacks, as well as heading away long balls.

But He’s Also Handy With the Ball However, Carlos is more than just a physically tough defender who’s good aerially.

The 27-year-old has recorded a passing success rate of about ?82%, showing his ease with playing out from the back. Julen Lopetegui is clearly confident about his charge’s technical skills, to the extent that the centre back has been trusted with the ball often and is third among his teammates for the most number of passes made during this league campaign.

Like Virgil van Dijk, Carlos can make successful long balls into the channels for attackers, and can also push upfield to play a part in starting attacks for Los Nervionenses.

Sevilla did not have a strong defensive rearguard before Carlos arrived. They shipped 58 goals two seasons ago in the league, and last year had only the eighth-best defence in ?La Liga.

But the 2019 arrival from Nantes has done much to improve their backline. His addition has added a strong presence in front of goalkeeper Tomáš Vaclík, and Los Palanganas have only conceded 29 goals in 27 league games, which is a better total than Barcelona.

With many clubs looking for a player to transform their backline, Carlos could be a good addition to do just that.

He Views Cavani & Suárez as His Toughest Opponents When recently asked about the most difficult opponents he’s ever faced, Carlos listed the two Uruguayan modern greats that he’s encountered in both France and Spain.

As quoted by the ?International Business Times, he said: “Cavani. He is very strong, he hits from anywhere, he never stops, he gives the defence a lot of work, he always went back to help his team-mates, despite his age. If there’s one shortcoming in the 27-year-old’s game, it’s his tendency to commit silly fouls.

Among all centre backs, he’s made the second-highest number of fouls (35) in La Liga, with a tally higher than many in the Premier League, including Arsenal’s David Luiz and way more than any other Liverpool defender – by comparison Van Dijk has committed only ten, and Gomez has made nine.

Carlos tends to back himself in lunging for the ball, even in his own penalty area. While he does come away with the ball on most occasions, it’s hard not to think what would happen if he came up against faster forwards, such as those in England’s top flight.

As Dejan Lovren knows all too well, Reds fans can turn quickly on defenders who tend to make ill-judged lunge tackles.

He Was Kicked by a Referee and Sent Off 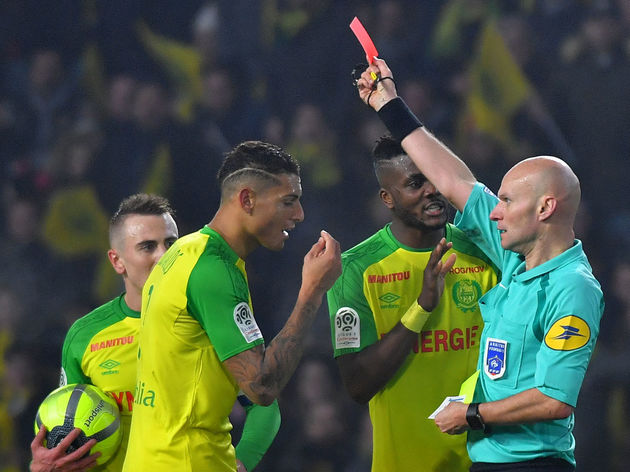 Yes, you read that right.

In one of the most bizarre football incidents from 2018, then-Nantes defender Carlos was kicked out at by French referee Tony Chapron during a Ligue 1 game against Paris Saint-Germain. Yet it didn’t end there, with the Brazilian then being sent off by the official for no apparent reason.

The red-card was eventually rescinded by the French Football League (LFP), and Carlos was free to play Nantes’ following league fixture. It’s still a hilarious clip that even we can’t believe happened at all…

?? Stop scrolling and watch this video ??

Referee Tony Chapron kicks out at Diego Carlos and then sends him off in a moment of madness in Ligue 1… ? pic.twitter.com/F1Ou6wt8QN If this all sounds good to ?Reds fans, then they should know Carlos won’t come cheaply.

The Brazilian has a release clause set at around £65m at Los Palanganas, with his contract lasting until 2024. Lopetegui will be determined to keep his best defender at Estadio Ramón Sánchez Pizjuán for as long as possible.

Yet having let Wissam Ben Yedder and Clément Lenglet leave for big fees in the past, Sevilla will undoubtedly consider any bid tabled for the Brazilian.

And if we’ve learnt anything from the big money arrivals of Alisson and Van Dijk, it’s that the Reds will be prepared to spend huge to sign their transfer targets, regardless of how much it may cost them.

He’s Recently Spoken About His Future 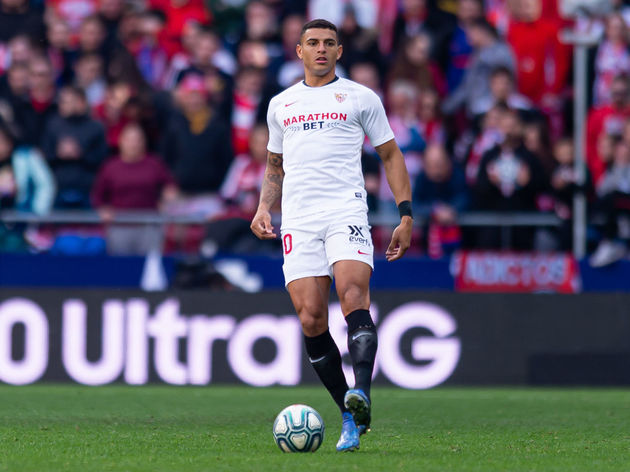 While speculation continues to swirl, Carlos has recently addressed the rumours over his future, stating he is happy at Sevilla.

He told Estadio Deportivo, as quoted by ?the Daily Mail: “So far, my agent has not spoken to me about those situations.

“I am not interested to know about other teams. I always tell him that, if he is going to tell me something, that it be something firm, that he does not come to me with stories, because I must have my head focussed on Sevilla.

“I don’t want those things to cause me a distraction.”

He did, however, leave a little nugget of uncertainty over his future, adding: “I’m very happy at Sevilla.

“I really like the club and the city. The city is wonderful. We love it, my family and me. Coming to Seville is already taking a very big leap.

“If I ever leave Sevilla, it would be to go to a much bigger club, because Sevilla is already great.”