So while any goal will do in most cases, when someone manages to smash the ball in the goalhole spectacularly, memorably or downright super-humanly, we all stand up and take note.

Two years ago today we were treated to such an occasion, when ?Cristiano Ronaldo put Juventus to the sword with a neat little trick known as an ‘overhead kick’.

These are always special occurrences. Why? Mainly because it doesn’t happen all too often, but mostly because it is the pinnacle of improvisation and sets the goalscorer apart from the norm. Even in a playing field containing the top 0.000000001% of footballers, they manage to go above and beyond; in some cases, above and beyond the bloke stood next to them.

Alas, let us herald the finest instances of such ability by flicking through the very best overhead kicks we’ve been treated to over the years and compiling them all into one healthy, absorbing list. You’re most welcome.

Hat-tricks are another way of setting yourself apart from the rest of the pack, ‘Yeah, sure, you can score a goal, but i can score three in one game‘. Well, how about melding a hat-trick together with a ridiculously special overhead kick? Does that whet your appetite? I should bloody well hope it does.

?Barcelona were the beneficiaries of those particular stars aligning, when Rivaldo scored his third goal of an engrossing clash with Valencia back in 2001. The control, technique and finish were glorious, but even more crucially, it secured 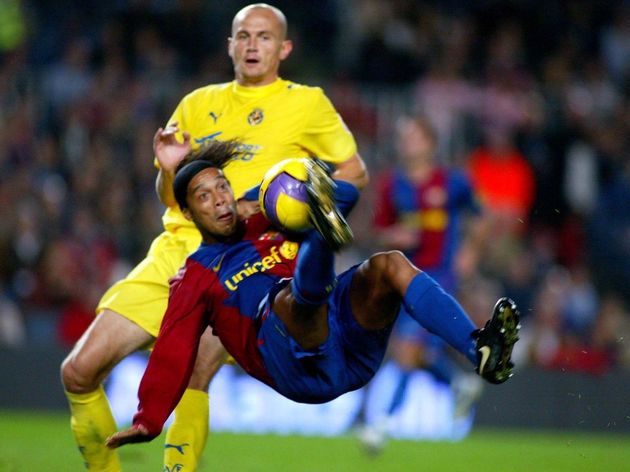 Sticking with the Barcelona theme, let’s move on to another Brazilian legend of the club. We all know full well just how technically gifted those from this particular part of South America are, but seeing that ability in motion is truly a sight to behold.

Villarreal were the unfortunate recipients on this occasion, as Ronaldinho added even more flair to an already intrinsically superb piece of skill. Chesting the ball in the box, the I don’t even care who crossed the ball in for Negrete for this goal, he deserves the assist himself (not that this is in anyway possible).

The most perfect of chest control sees the ball float perfectly vertical, and with the defender closing him down in the box, he casually lifts it over him with his left, then onto his head, and then onto his left foot. The rest, as they say, is history. Watch it ?here. Sometimes, an overhead kick is a last resort. By that I mean you’ve got nobody to pass to, no way of controlling the ball in time, and you see your name littered across the back pages. So, often, it’s a case of ‘why the f**k not?’

Philippe Mexes had one of those moments in 2012. The central defender controlled a rubbish free kick on his chest while running away from goal and as seemingly any other option would appear more logical, instead he opted to produce and audacious overhead kick. It’s a good thing he did to, because it was a magnificent piece of improvisation that was so perfectly executed it hurts to even think about. It’s worth noting that before this season, ?Wayne Rooney had some criticism directed his way for supposedly being overweight. So, I ask you, how does an overweight footballer leap into the air with outstanding agility and score one of the ?Premier League’s greatest ever goals from a cross that was deflected?

Not only is the technique and application stupendous, he did so in a Manchester derby. Few words do the goal justice, and only the most cynical of people try to belittle it by stating he scored it with his shin. Two things: firstly, shut up, and secondly, shut up.