When it comes to polarising figures in football, Tottenham Hotspur boss José Mourinho sits on the throne.?

Whether he’s attacking his own players or dragging his team outside for a quarantine-breaching job, you never know what you’re going to get from Mourinho. It feels like we’re always no more than a week away from a fresh act of nonsense.

There’s a near-infinite selection of crazy moments from his career to choose from, but here are 10 of the best. “As we say in Portugal, they brought the bus and they left the bus in front of the goal. I would have been frustrated if I had been a supporter who paid £50 to watch this game because ?Spurs came to defend.”

This was a ?quote from Mourinho about Spurs in 2004, and it’s pretty much where the ‘park the bus’ idea in England came from. He hated it so much and has made no secret of that. However, he then seemingly changed his mind.

Nearly 16 years later and Mourinho is in charge of that very team, and he’s using that defensive style of play which he demonised. He’s the one who ends up getting criticised for parking the bus. It’s a kind of irony which you can’t make up. Mourinho and Frank Rijkaard probably aren’t friends. The pair exchanged blows with stunning regularity in the past, but their most-famous clash came in early 2005 after ?Chelsea’s 2-1 loss to ?Barcelona in the ?Champions League.

He claimed to have seen Rijkaard enter referee

Hiding in a Laundry Basket

As part of that ban, Mourinho was not allowed into the dressing room for his side’s quarter-final clash with ?Bayern Munich, but he still got there anyway.

How? Well, he stowed away in a laundry basket after hiding in the dressing room for six hours and was eventually smuggled out of the stadium to ensure nobody could spot him.?

Rumours of this swirled around on the internet for years, with many insisting it can’t possibly have been true, only for Mourinho to finally ?confess to it 14 years later.

Celebrating on the Camp Nou Pitch 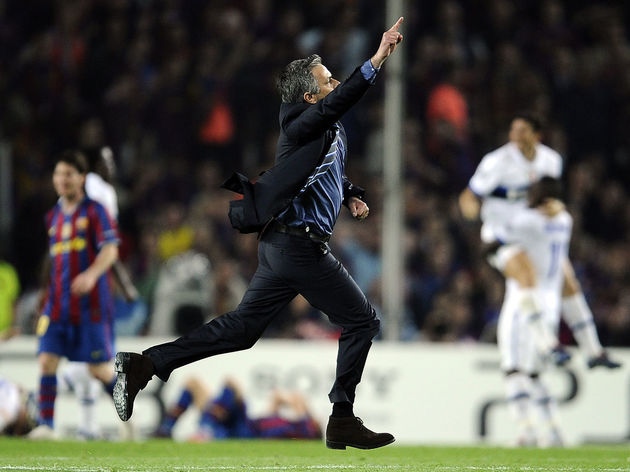 Having already announced himself to the world with a sprint down the Old Trafford touchline, Mourinho took it one step further and took his celebrations to the Camp Nou pitch in April 2010.

Mourinho’s ?Inter side actually lost the second leg of their semi-final clash with Barcelona, but they still managed to sneak through to the final on aggregate. That’s all that mattered, and Mourinho let his excitement be known by sprinting on to the pitch when all was said and done.

Channelling his inner Alan Shearer, Mourinho raised one arm to the sky and he sprinted around the pitch, laughing in Victor Valdés’ face in the process. Love him or hate him, Mourinho’s antics are normally harmless. He just wants to rile people up. However, he took things a little too far when his ?Real Madrid side met Barcelona in the Spanish Super Cup in 2011.

Waiting for a Referee in a Car Park Something about planning to surprise someone in an underground car park late at night sounds a little sinister, but Mourinho seemingly had no problem with it.

He was spotted waiting for ?Sergio Ramos Bursting Into a Referee’s Dressing Room & Refusing to Leave So, as Mourinho has already told us, he’s not a fan of managers speaking to referees at half-time, but he still did it anyway in 2015.

During Chelsea’s 2-1 loss to ?West Ham United, the Blues were denied two goals and

Chasing After a Chelsea Coach Mourinho returning to Stamford Bridge with ?Manchester United was always likely to be a heated affair, but few expected Blues coach Marco Ianni to be the reason everything kicked off.

Ianni celebrated a Chelsea goal by running directly past Mourinho, looking him in the eye and taunting him. Understandably, Mourinho wasn’t impressed, and he had to be restrained by stewards as he tried to chase after Ianni.

It all came after Ross Barkley bagged a 96th-minute equaliser, so it’s not as if Chelsea had even won the game or anything. All that for a point.

Trying to Get Raheem Sterling Sent Off

Then he remembers that Sterling has received a yellow card and charges towards the fourth official to remind him! ?? pic.twitter.com/8lfd2r2guK

2020 peaked in February when Mourinho tried to get ?Raheem Sterling sent off in Spurs’ 2-0 win over ?Manchester City.

The Englishman was already fortunate to avoid a red card for a poor early tackle, instead only picking up a yellow, but he was then accused of diving later on. He fell to the floor in search of a penalty which never came, and Mourinho had some real mixed feelings about it all.

After sitting and laughing on the bench in delight at seeing his side avoid a penalty, his joy turned to fury in a split second after he was reminded of Sterling’s earlier yellow. Less than a second after smiling his heart out, he was charging towards the linesman in search of a red. Comedy gold.