One thing that Real Madrid have never lacked is star power.

Throughout the club’s history, t Fast-forward to the early noughties and Florentino Pérez’s Galáctico policy emptied the coffers for the best talent around Europe.

Even last summer was no different; Real spent a cool €300m to bring in Eden Hazard, Luka Jovic and Eder Militao among an assortment of others.

With all these incredible signings, it means that if you’re a Real Madrid fan, you live a pretty rarefied existence. ?Six-time ?La Liga winner, three-time ?Champions League winner, more than 500 appearances for the club. The number one shirt is in no doubt.

The chiselled Madridista dons the gloves in this XI,and it’s no competition. Casillas joined the club at eleven, became captain and led ?Real to win a load of silverware.

It’s just sad that the club that he called home got rid of the man so callously.

There, there Iker, you’re always welcome in this fantasy XI. In choosing Chendo to take the number two shirt, it’s choosing another academy product to show that Madrid aren’t always about flashing the cash.

Miguel Porlán or ‘Chendo’ started and finished his glittering career at Real Madrid. The one-club man racked up more 400 appearances and captained the club to numerous successes.

Not content there, Chendo wanted the storybook ending so finished his career as a part of the Champions League-winning side that beat ?Juventus on penalties.

A fitting end for a top-quality operator. ?Owner of the muscliest legs in world football for more than 20 years, Roberto Carlos changed the game.

Inexplicably sold by ?Inter after only one brilliant season in Italy, Real Madrid only had to pay £ Although he’s the biggest villain in world football right now, ?Sergio Ramos should be protected at all costs. It’s characters like Ramos that make football such a compelling game, even if the Madrid captain plays loose and fast with the rules.

Concussing goalkeepers, purposely getting yellow cards and dislocating shoulders is child’s play to the Spaniard. His record-breaking 26 red cards should be applauded for its absurdity and is likely to never be broken.

The fact that he’s a serial winner that’s been at the top of the game for 16 years only adds deliciously to his overall image.

We’re unsure if even his mother likes him, but by God, we know she respects him. Zinedine Zidane was so good that people thought nothing of him taking a defender’s number; he made it cool for a midfielder to wear the number five.

Zidane was the most aesthetically pleasing footballer – the Frenchman’s touch and skill were prodigious. While his Galácticos side might have underachieved in terms of trophies, Zidane wasn’t to blame.

His 30-yard volley against Bayer Leverkusen in the Champions League final in Glasgow was a seminal moment for football fans everywhere.

The best player of his generation isn’t left out of any side, and we’re not about to start. ?While potentially a contentious selection, people are quick to forget what a crucial player Fernando Redondo was to the Madrid side of the late 90s.

His play, most notably alongside Steve McManaman, led Real to Champions League glory in 1998 and 2000. His performances were so good that during the success of 2000, Redondo won the competition’s Most Valuable Player award.

It was that year that Redondo famously left Henning Berg all ends up at Old Trafford, with a delicious backheel before putting it on a plate for Raul to finish. After the game, Sir Alex questioned what wizardry Redondo had just done.

“What does this player have in his boots? A magnet?” Fair question. 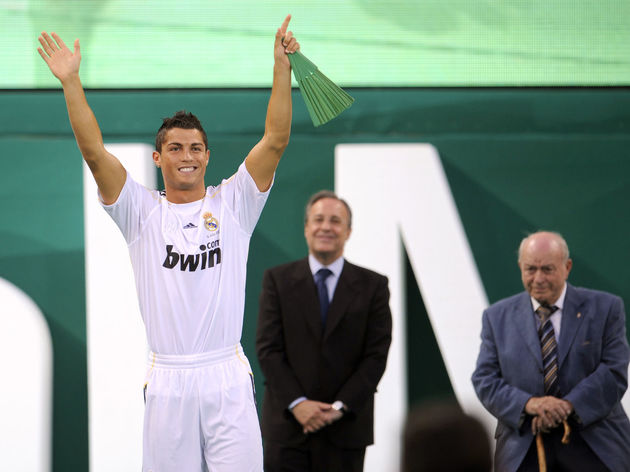 ?When Cristiano signed for Real Madrid for the eye-watering figure of £80m, even the most loyal fans must have been unsure whether the Portuguese striker could repay the fee.

I think we can now safely say that Ronaldo well outdid even the wildest of expectations for the player. Two league titles, two Copa del Reys and four Champions League titles. Oh, and 451 goals as well. Whenever there’s a list of the ‘world’s best players’, the Argentinian is always near the top. Pelé, who knows a thing or two about football, called Di Stéfano the best Argentinian player ‘ever’ in 2009.

The striker scored in five consecutive European finals, including a hat-trick in the last one. The list of achievements and the testimonials by contemporaries are endless. ?The greatest Hungarian footballer ever, Puskás made a formidable partnership alongside Di Stéfano. One of the most prolific strikers ever, Puskás eventually moved to Madrid after scoring 358 times for Budapest Honvéd in 1958.

He joined the club at 31, perhaps not as trim as he once was, but that didn’t stop the Hungarian. In his first La Liga season, Puskás notched four hat-tricks as Real Madrid stormed the league.

His trophy collection is as ridiculous as his scoring rate, five league titles and three European Cups. There might be some surprise that a certain Brazilian striker isn’t in our final spot, but in terms of their Real Madrid careers, there are few comparisons to Francisco Gento.

The most successful player in Real Madrid history, Gento won 23 major honours in an 18-year career that included more than 400 appearances.

Ronaldo’s best club moments happened in either an Inter shirt or worse still, a Barcelona shirt. Gento is the most decorated players in Los Merengues’ history, so there’s no debate really.