Strikes from Mariano and Vinicius Jr. were enough for Real Madrid to beat Barcelona in El Clasico and reclaim first place in La Liga on a rainy Sunday evening at the Santiago Bernabéu.

Vinicius became the youngest ever scorer in El Clasico as his deflected strike handed the initiative back to Madrid, who sealed victory with Mariano’s only touch of the game in stoppage time, to leapfrog Barça back into top spot. 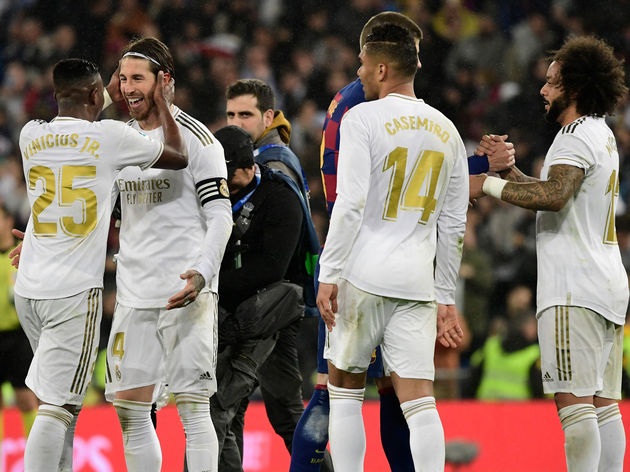 After a cagey opening, Antoine Griezmann found Arthur to put him one on one with the keeper, but was unable to lift it over the onrushing Thibaut Courtois.

Lionel Messi, having been picked out by a defence-splitting pass from Sergio Busquets, was then denied by the Belgian who again made himself big.

Early in the second half, Isco’s whipped effort was clawed away by Marc-Andre ter Stegen before the diminutive Spaniard did beat the German, only to see his header cleared off the line by Gerard Piqué.

?Barça substitute Martin Braithwaite then drew another save from Courtois before Vinicius’s strike was diverted into his own net by the unfortunate Piqué.

A brilliant goal-saving tackle from Marcelo then denied Lionel Messi before Mariano came off the bench to seal the points for ?Real Madrid and consign their rivals to defeat.

A cutting edge and a worrying lack of it. The victory will cover up the failures in front of goal but it was only thanks to two huge slices of luck that Madrid claimed all three points here.

For large parts of the game, promising moves were let down by poor finishing in the final third. Time and time again during the first half, well-constructed build-up play was not matched by the finishing, Karim Benzema and Toni Kroos both guilty of blazing high and wide.

Vinicius has only scored three times in 36 games and his lack of potency was again evident here. Too many times his final product fell way short of the mark.

It wasn’t only the teenager guilty of wasting chances, as Benzema snatched at the limited opportunities that came his way as his wait for a goal continued.

In truth, Vinicius was fortunate to be on the receiving end of a wicked deflection to edge ahead.

And lady luck really was with Zinedine Zidane’s side as Mariano’s mishit found its ways past ter Stegen for Madrid’s second.

The Uruguayan continues to impress for Los Blancos and gave another man of the match display against Barcelona.

Playing on the right of a midfield three, he was effective both defensively and offensively.

Breaking up the play

Fede Valverde is honestly something special, he’s been unreal down that right wing tonight, has been unreal while defending and looks as our main threat so far.

Fede Valverde showing the world why his release clause is worth 10x what Barcelona paid for Frenkie de Jong. #ElClasico

Breaking up the play, he was quick to crowd out Frenkie de Jong and won his own personal duel in that respect.

As for going forward, he found space on the right and was able to exploit Jordi Alba, who was making his way back from injury.

Valverde was assured on the ball, showing strength and guile to put Madrid on the front foot.

At times it was frenetic in the middle of the park but Valverde never looked rushed nor panicked such was the composure he showed in possession.

From Setién’s early days as Barça coach, it’s clear that domination of the ball is his mantra but there have been questions over his side’s ability to turn possession into an end product.

The reason Setién’s 4-3-1-2 isn’t working as expected isn’t so much because of systemic deficiencies, but individual.

Players are ignoring the runs of Jordi Alba and instead playing into traffic in the final third. It’s also taking the players too long to arrive into the box.

And the jury was out here as Barcelona failed to find the back of the net and all their intricate passing play came to nothing on a frustrating night in Madrid.

In Luis Suarez’s absence, Barça have often been described as toothless and yet again they struggled to find a cutting edge.

Several times, Antoine Griezmann’s decision making was off-kilter, times when he should have passed, he opted to shoot and vice versa.

It has been a criticism of Setien’s Barca side that they lack a penetrative edge and for large spells in this game, the critics were proven right.

Too often there was no one in the penalty area, playing off the shoulder, looking to pounce or showing predatory instinct.

It wasn’t until the introduction of Braithwaite that the visitors had a focal point in attack and the Dane was unlucky not to end up on the scoresheet.

Where some Barca players may appear a little dumbfounded by Setien’s system, Busquets fits in seamlessly and is thriving under the new manager.

He was imperious again against Madrid, dictating the tempo from the middle of the park, everything seemed to channel through the midfielder.

Semedo and Busquets have been our players so far. Masterclass performances from both of them.

Sergio Busquets ranks 2nd in La Liga for through balls behind the defensive line (11). The only player with more is Lionel Messi (24). That ball from Busquets over and beyond to Messi was fantastic and Messi really should have done better with it.

Busquets almost crafted the opening goal as his lofted ball split the Madrid defence, however Messi was unable to provide the finish that the pass deserved.

Rarely does the towering Spaniard lose the ball and he is the calming influence in front of the back four.