On 6th March 1902, Julián Palacios, Juan Padrós and a group of others founded a brand new team called Madrid Football Club. In the 118 years since, it’s safe to say that things have gone pretty well for the club.

To celebrate the anniversary, here’s a look back at nine of the best moments in Real history.

?Real have won a whole lot of league titles (and I mean a whole lot), but they first time they ever got their hands on the trophy came in the 1931/32 campaign.

Then known simply as ‘Madrid’, the team went unbeaten for the entire 18-game campaign and managed to end Athletic Bilbao’s reign of terror. Invincibles who?

The goals of Manuel Olivares set Real apart from the rest, just as they did the following season when the team won the league again.

Gather round, children. It’s time for a story.

The year is 1943. In the first leg of the semi-final of the ?Barcelona

still recognised as legitimate. So that’s why it’s here.

The late 1950s were good to Real, and that’s largely due to the strike force of Alfredo Di Stéfano & Ferenc Puskás.

On his own, Di Stéfano fired Real to three consecutive European Cups between 1955 and 1958, and Puskás’ arrival ensured Los Blancos won the next two tournaments as well.

The pair’s defining moment came in the 1960 final, which was the first match to ever be televised worldwide. Di Stéfano and Puskás combined for all seven goals in a 7-3 win over Eintracht Frankfurt, helping the entire world fall in love with Real.?

One of the most iconic moments in club history came back in October 1999, and it should come as no surprise that club legend Raúl González was behind it.

At Camp Nou, Barcelona had twice taken the lead and held a 2-1 win heading into the last few minutes. The crowd were going wild in anticipation of a victory, but Raúl poked home a late equaliser and celebrated by shushing the rival fans.

It was everything to Real fans. The arrogance. The confidence. Add into that the fact that it hurt Barcelona’s feelings, and it’s the perfect moment.

Come on then. Tell me what you think the greatest goal in ?Champions League history is. Did you say Zinedine Zidane’s volley against Bayer Leverkusen in 2002? Good.

In what was his first season at the club, the Frenchman justified every penny of his £46m price tag by firing home a ludicrous volley in the final of the competition. Zidane watched the ball drop out of the sky and sent it flying into the top corner with technique which still hasn’t been fully comprehended to this day.

The game also saw a young Iker Casillas come off the bench to prove himself to the world as a dominant force, so it was a pretty good day for everyone involved. 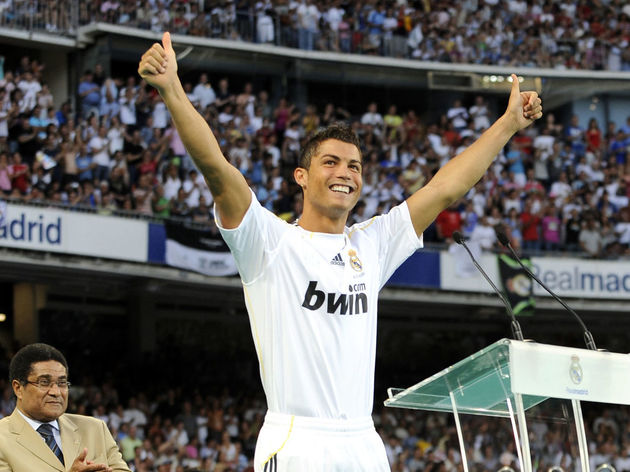 You ever heard of this guy?

In the summer of 2009, Real parted with a cool £80m to bring in a winger by the name of ?Cristiano Ronaldo to the Santiago Bernabéu, and he repaid their faith by scoring 450 goals in 438 games and becoming the club’s all-time top scorer. Good trade.

Real were already good, but signing Ronaldo ushered in a new era in Madrid. And they even made a profit when he was sold to ?Juventus. How’s that for good business? El Clásico of October 2012 is touted as one of the most exciting ever. Both Ronaldo and ?Lionel Messi put on a real show, but the former stole the headlines with his final celebration.

Channelling Raúl from 13 years earlier, Ronaldo bagged the opening goal turned to the crowd to debut his ‘calma’ celebration?, warning Camp Nou to pipe down in the presence of greatness like him.

Again, the game ended 2-2, but anytime somebody mugs off Barcelona has to go down in Real history. The entire 2013/14 campaign was dominated by Real’s hunt for their tenth Champions League triumph. Known as La Décima, Real were obsessed with making it a reality.

Under the guidance of Carlo Ancelotti, Los Blancos made it all the way to the final, and only cross-town rivals ?Atlético Madrid stood in between them and immortality. It looked like their dream was crashing to a halt as, with 92 minutes on the clock, they trailed 1-0. Enter ?Sergio Ramos.

The defender popped up with a late equaliser to send the game to extra time, before ?Gareth Bale, ?Marcelo and Ronaldo all netted to steer Real to the ultimate glory. Most clubs don’t even win one Champions League title. Real managed three in a row between 2015 and 2018. Just let that sink in.

Zidane’s men saw off Atlético, ?Juventus and ?Liverpool in consecutive years, in what was an unparalleled display of continental dominance.? Retaining the Champions League is hard enough, let alone doing it twice.

That 2017/18 final against Liverpool saw Bale steal the show with an utterly outrageous overhead kick, which was probably worth all the years of anguish in Madrid.