Barely a month into his Paraguayan venture with the mighty Olimpia, the man who typifies the meaning of ‘absurd’ is at it again; seeing red with a ludicrous kung-fu ‘challenge’ in an attempt to win the ball in the air, instead smacking his studs into the chops of a 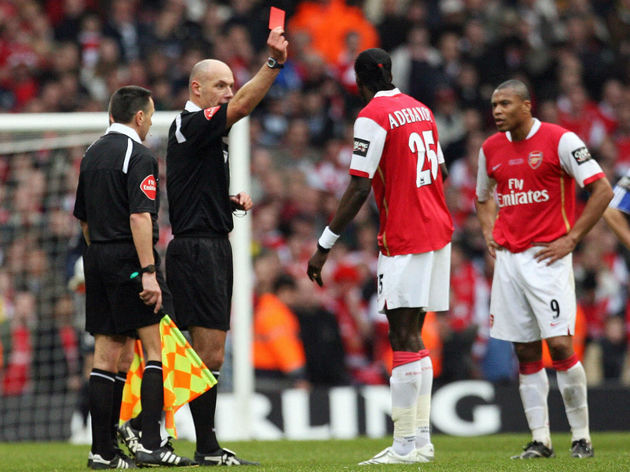 The gangly forward proved an instant hit at the Emirates, however, netting on his Premier League debut before scoring a memorable winner in Arsenal’s 1-0 win over Manchester United at the start of the 2006/07 campaign.

His first moment of madness, however, would come later that season in the Carling Cup final against Chelsea, with Adebayor given his marching orders by referee Howard Webb after allegedly throwing a punch at Frank Lampard.

Outraged by the decision, Adebayor confronted Webb before being dragged off the Millennium Stadium turf by the club’s physio – with an onwatching Thierry Henry guiding him down the tunnel as the abuse continued to hurtle out of the striker’s mouth.

It’s fair to say that incident set the tone. 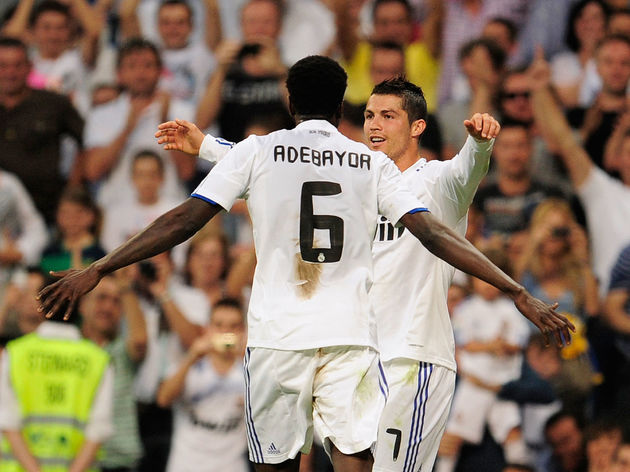 After struggling to kick on in his second season at the Sky Blues, Adebayor was loaned to Evert–, sorry, to where? REAL MADRID!?!?

That’s right, Jose Mourinho added the Togolese hero to his Los Blancos squad midway through the 2010/11 season to provide support for Karim Benzema and Gonzalo Higuain up top.

He fared well during his loan spell at Real

The only thing more shocking than the move itself was the fact he wore the number six shirt during his six-month stint. Disgusting.

Sent Off in the North London Derby Adebayor being Adebayor, he made the move to Tottenham

He failed to reach the heights that he achieved under Harry Redknapp, however, scoring just five Premier League goals in 2012/13, with one of those strikes coming in the 5-2 defeat at Arsenal in mid-November.

It was a game that started so well for the striker, giving his side the lead with a simple finish past By the time Tim Sherwood’s gilet arrived in the home dugout at White Hart Lane, it was clear that Adebayor’s days were numbered at the highest level.

But Sherwood’s arrival coincided with an upsurge in form by the Togolese front man towards the end of the 2013/14 campaign, as the demising forward provided the Lilywhite faithful with one more lasting memory; the salute.

Was there any meaning behind it? Who knows. Was it great? Absolutely.

The images of the lanky striker having his celebration replicated by Sherwood and assistant Chris Ramsey following strikes against Dnipro and Sunderland were rays of light amid a bleak period for the club.