Real Madrid host Barcelona in the 180th La Liga Clásico this weekend, with the latest edition likely to prove season-defining one way or another.
?

Madrid boss Zinedine Zidane faces a selection dilemma in the forward positions as he runs out of reasons not to start Welshman Gareth Bale in the absence of Eden Hazard and Rodrygo, while Vinicius Junior continues to underwhelm.

Should he feature, the game will be Bale’s 16th Clasico in all competitions – by far the most of any Brit.

The ??’Black Pearl’ was only at ?Real Madrid for two-and-a-half injury-riddled years – making 58 appearances – but he still made quite the impact on and off the pitch.

The agile winger – the first Brit to play for Los Blancos and only the club’s second black player – scored 12 in his first season as Real Madrid won La Liga, while his right-back torturing display in the 2-0 win over Barcelona in 1980 earned him a rare (incredibly rare) standing ovation from the Camp Nou crowd.

After spells at Sporting Gijon, Marseille and Rayo Vallecano, he died tragically young, in a car crash aged 33.

The only Scottish player to have featured in the Clásico to date is former target man Steve Archibald, who was brought to Camp Nou from Tottenham in 1984 by manager Terry Venables for the cool figure of £1.15m.

On 2 September the same year, he became the first Brit to score in the fixture as Barça ran out 3-0 winners at the Bernabeu.

The Scot was ?Barça’s top scorer (15) that season as the Catalans won La Liga and Real Madrid could only finish fifth. Following his Golden Boot showing at the 1986 World Cup, Lineker became Venables’ next British recruit, joining for £2.8m from Everton.

While he never won La Liga with Barça, Lineker did earn a Copa del Rey and a Cup Winners’ Cup during his time in Spain and was popular among the fans for integrating in a way few British players abroad at the time managed.

In Clásico terms, Lineker scored five times in eight appearances and is best remembered for his 1987 poacher’s hat-trick, with the first two goals coming from a combined total of about six yards out. The third of Venables’ British forwards was probably the least successful.

The first (and to date only) Welshman to join Barcelona, Hughes scored just five goals in all competitions in his one seasons at Camp Nou and featured in one Clásico – a 1-1 draw at the Bernabeu in 1986.

The future Man City and Wales manager left Barça after one year and found more success at Bayern, Man Utd and Chelsea – but the fact that he played for La Blaugrana back in the eighties was still a ?source of incredulity for Cesc Fabregas years later.

He is the last Brit to play for Barça’s first team. 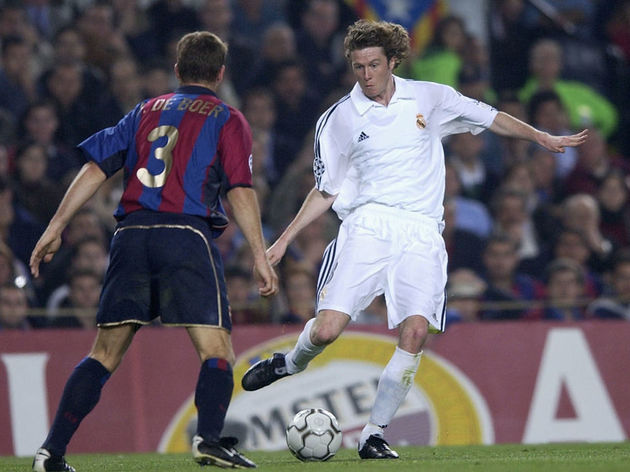 Easily the most successful Englishman to play in Spain, McMananman – who joined Madrid on free in 1999 – won six titles in four seasons including two Champions Leagues (scoring in the 2000 final).

Macca played in seven Clásicos in total – scoring once in the 2-0 Champions League semi-final in 2002.

Oft-cited in Madrid teams of the noughties, McManaman was called a ‘gentleman’ by Vicente del Bosque and later gave advice to the next men on the list prior to joining La Liga… Easily the biggest commercial success for British players abroad, Beckham only won one league title in four years as a Real Madrid player – in his final season with the club.

While he never scored against Barcelona, he did (of course) get two assists. 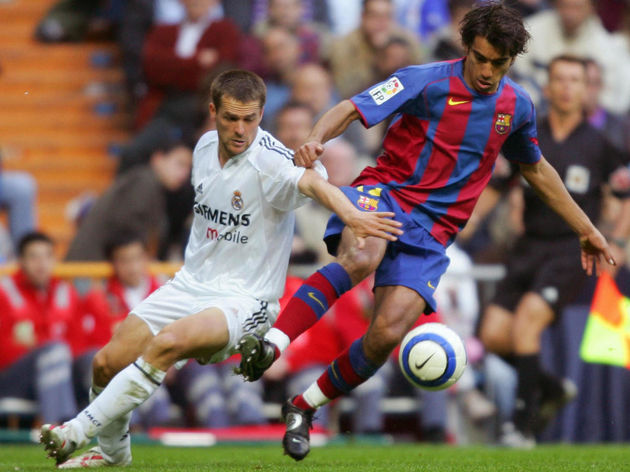 A Ballon d’Or winner by 21, Michael Owen fit the Galatico brief for Real Madrid in the summer of 2004, but he failed to replicate the success of McMananman, whose path he followed from Liverpool to the Spanish capital.

Despite not winning a trophy in his single year in Spain, Owen still scored 16 goals in 45 outings, while struggling to dislodge legendary duo Ronaldo and Raul.

The highlight of his short stay came with a typically Michael Owen strike in a 4-2 Clásico win in April 2005. The last and easily most objectively successful Brit at either Barcelona or Real Madrid is also, probably, the most polemic.

Signed for £80m in the summer of 2013, Bale has suffered from three things in Madrid.
?

3. Not being Cristiano Ronaldo

Despite this, ‘the Golfer’ has still scored 105 goals in around 250 games for Real Madrid, winning four Champions League (scoring in two finals) and the 2017 La Liga title.

Everyone’s favourite scapegoat may well play his 16 Clasico this weekend – more than any other Brit – while he has two goals against Barcelona, including that match-winning solo effort in the 2014 Copa del Rey final.