?Real Madrid manager Zinedine Zidane has hit back at criticism levelled at the referee in his side’s win over Sevilla by opposition sporting director Monchi.

Monchi took a dim view on the decision which saw Sevilla have a goal ruled out in the first half, which would have put them 1-0 up, when Real Madrid’s Éder Militão was blocked off by Nemanja Gudelj at a corner before Luuk de Jong headed home. 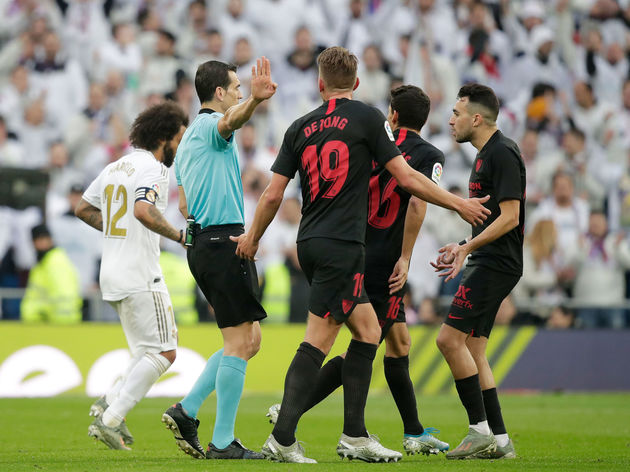 Zidane’s view of the events could not have differed more, as he explained:

?Real MadridIt’s a bit strong what he said, but I’m not going to stop the sporting director of Sevilla from talking.” De Jong did find the net legally in the second half as he levelled the score, seven minutes after ?Casemiro’s opener. However, Zidane felt that Munir El Haddadi had handled the ball whilst on the ground in the buildup to Sevilla’s goal.

The former Ballon d’Or winner said: I can’t explain anything and I never enter into evaluating it. It’s the referees who decide. Sometimes it goes against you and sometimes it goes in your favour.”

Zidane maintained his place in the moral high ground as he added:

If the referee wasn’t decisive, Casemiro certainly was, as the Brazilian’s two goals steered Madrid to the top of the La Liga table, with ?Barcelona sitting three points behind with a game in hand.