The two in-form sides demonstrated early on that they were capable of beating one another’s press but similarly, both struggled to work any clear-cut openings when they got into the final third.

Sevilla thought they had taken the lead through a pinpoint Luuk De Jong header from an Ever Banega corner, but the goal was ruled out via VAR after Nemanja Gudelj was adjudged to have deliberately blocked off the Dutchman’s marker, Eder Militao. Los Blancos started to fade after a bright opening 15 minutes and for much of the goalless first-half, it was the visitors who were on the front foot.

Real’s lacklustre display looked to have carried into the second period but after 57 minutes, they took the lead through Casemiro. The Brazilian latched onto an exquisite Luka Jovic backheel before dinking over Tomas Vaclik in the Sevilla net.

That goal sparked the game into life as Julen Lopetgui’s men grabbed an immediate equaliser – De Jong finishing wonderfully with his left foot after collecting a loose ball from just inside the Real area. 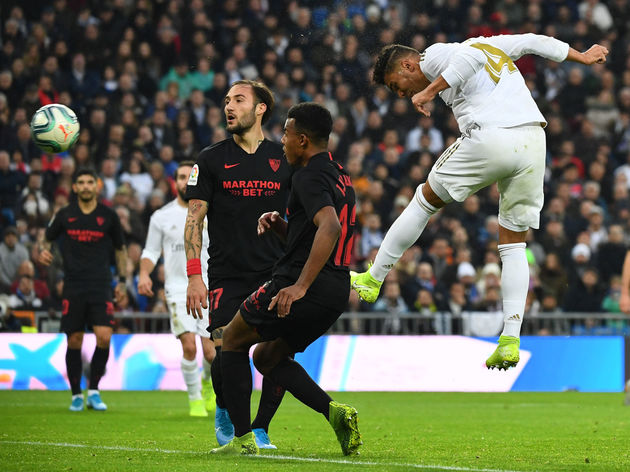 Zinedine Zidane would’ve been a worried man at the break after his side’s tepid first-half performance. But in the end, they were able to squeak past a resolute and confident Sevilla side after a much brighter display in the second period – one inspired by Los Blancos’ Brazilian enforcer.

The substitution of Vinicius Jr down the left saw the hosts’ performance improve, as they finally started to play with some zip and energy in the final third. At the back, meanwhile, Militao and the imperious Raphael Varane did a fine job at limiting the number of high-quality chances the away side had, although they were unable to keep a clean sheet.

Despite the sub-par display for much of the game – which could be attributed to their recent Super Cup venture – Zidane will be thrilled with the result in what was a big game in the title race.

Casemiro continued to prove why many regard him as the best number six in world football with a match-winning display at the Bernabeu.

While there was the odd blip in possession, his work off the ball was was, of course, superb as he persistently broke up play in the middle of the park – almost single-handedly ensuring that Sevilla’s key creators, Ever Banega and Franco Vazquez, had little joy in the Spanish capital.

This has been such a leader esque performance from Casemiro, contributing with goals when it looked like Real Madrid can’t stitch an attack together. A brace for the Brazilian today. Captain material.

What an assist from Jovic, but that was a breathtaking finish from Casemiro.

In what was a defensive-midfield masterclass, the Brazilian also proved his worth in the attacking third as he netted both of his side’s goals in the second period – the first being a wonderful chipped finish that any elite forward would’ve been proud of.

An invaluable member of Zidane’s squad.