The game started exactly as you’d expect a Madrid derby to start, with ?Real controlling possession while ?Atléti sat back purposefully, content to take advantage of any early slackness from Zinedine Zidane’s side and counter at pace. Both Joao Felix and Alvaro Morata provided nervy moments for Los Blancos in the opening 15 minutes, but otherwise it was an attritional start to proceedings. Real controlled a packed midfield third in the first halfbut were struggling to create anything against a typically resolute Atleti defence. Ferland Mendy came closest with a right-footed effort that stung the palms of Jan Oblak, before Casemiro sent a header sailing over the bar.

Having been short of ideas in the first 45, Zidane’s side stepped up the tempo at the start of the second half, and the lively Luka Jovic clipped the outside of the far post with a low effort. Fede Valverde then somehow managed to head Dani Carvajal’s header onto his knee, when he looked certain to score from close range.

The best chance of the game fell to Atleti’s Alvaro Morata ten minutes from time, as the striker ran onto a great ball from Angel Correa, but with just inches separating him from Thibaut Courtois, he could only fire it against the legs of the overbearing keeper. 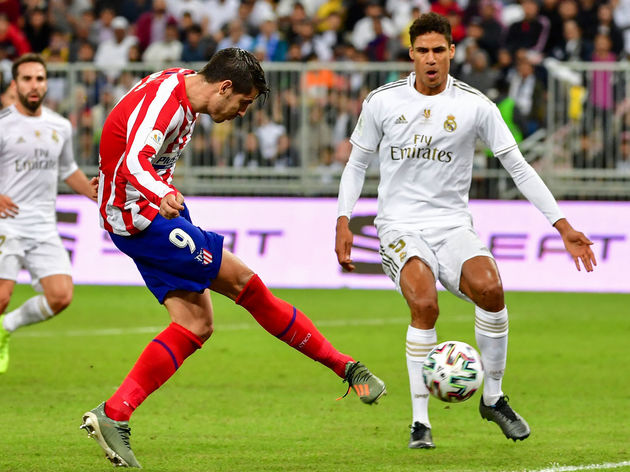 Substitute Rodrygo fluffed a good late chance, but neither side could complain as a game desperately lacking in quality trudged on to extra-time.

The additional 30 minutes brought out the best in both goalkeepers as the players tired and the game opened up, but just as it looked to be petering out, some drama struck. Morata broke through on goal, but one on one with Courtois, he was wiped out cynically by Valverde, who took a straight red card on the chin to keep his side in the game for the final few minutes of extra-time.

Some unsavoury scenes followed, and so too did penalties after nothing came of the resulting free-kick. But while the game itself ended with some late drama, there was none of that in the shootout, with Real netting four from four, as Atletico toiled, to seal the trophy.

Real came into this one refreshed and in resurgent mood. Having burned out with three straight draws prior to the winter break, they had warmed up for their trip to the Middle East with a 3-0 victory over Getafe and followed that up with a convincing win over Valencia in their Super Cup semi-final.

That victory saw a new tactical system implemented, with Zidane opting to play with five natural central midfielders to keep the opposition guessing where runs would come from. That carried over into the all-important final, with the partnership of Valverde and Carvajal asked to do much of the creating on the right hand side. While it worked remarkably well against Valencia, there was no such luck here. They had the better of possession throughout, but for 90 minutes they could not sustain a period of meaningful pressure, and the result was a poor game that played right into the hands of their opponents.

None of that will matter to Zidane and co, however, who had the bottle to take home the trophy in a reasonably fuss-free shootout.

STAR PLAYER – Whatever you think of Real’s season so far, few could fairly argue that the emergence of Valverde hasn’t been a huge positive that bodes well for the future – as well as the present.

Dissapointed.. But that’s what you expect playing against Raleti tbh.
Jovi? has received no service up there in part to his reflectance to make runs.
Fede Valverde is incredible… He’s switched to that pseudo wing role today so well!

??Typically a box-to-box central midfielder, the Uruguayan’s industry was put to use with startling effectiveness on the outside right of a fluid midfield five. He will have more creatively productive days in a white shirt, but he offered a consistent threat down the right, while the defensive cover he offered seamlessly gave license to Carvajal to stroll up and down the wing all day long.

His late red card was far from a moment to be proud of, but it was a case of taking one for the team and preventing a certain goal with minutes left on the clock.

It’s likely Atleti surprised even themselves with their dramatic comeback against Barcelona to reach the final, and from the off it was abundantly clear they weren’t prepared to make the same mistakes that necessitated a late, late show on Thursday evening.

José Giménez came in for Stefan Savic in the only change, but as a whole the team looked far more steady and assured off the ball, limiting their famous rivals to very little – in the first half at least. As both sides’ nerves settled, the game opened up, and with it so did Los Rojiblancos’ defence to an extent, but they continued to nullify the substantial threat offered by Real with characteristic effectiveness. For the most part they showed exactly why they have lost just once in La Liga since September.

They were comprehensively beaten in the shootout and it will be a sore one to take for Diego Simeone’s side, who did all they could over 120 minutes.

STAR PLAYER – The improvement in Atlético’s defensive performance from their semi-final against Barcelona was notable, and there was exactly one reason for that – the return of José Gimenez. The Uruguayan returned to the heart of the defence at the expense of Savic and seemed to immediately improve his side, marshalling the back line along with Felipe and ensuring that the lively threat posed by Luka Jovic – save for one or two menacing runs early in the second half – was kept on mute.

Real Madrid take on Sevilla back in the more familiar surroundings of the Bernabeu on Saturday, while Atlético travel to SD Eibar, looking to record a fourth straight La Liga victory.