As we pass the halfway mark of the season, we start to see who’s in the running for the Player of the Season Award. Of course, it’s way too early to decide, but let’s take a look at who’s in with a shout anyway… In just his first full season as a ?Real Madrid player, Fede Valverde has established himself as a fan favourite at the Bernabeu (although that can change very quickly, just ask ?Gareth Bale).

Mauling down ?Alvaro Morata in the Supercopa de Espana? when the ?Atletico striker was clean through on goal has had a lot to do with this, but it is also his passionate displays in the middle of the park that have won over the Real faithful.

At just 21, the Uruguayan is probably already the heir to ?Luka Modric, and could be turning out in a Los Blancos shirt for years to come.

For a team that spent over € Football’s Benjamin Button, ?Sergio Ramos just seems to get better with age. On the international stage he became Spain’s most capped player ever in October when he turned out for La Roja for the 168th time, but it’s his club form that has really caught the eye this season.

As previously mentioned, Real’s defence has been the foundation on which their title bid has been built, and the 33 year-old has been a key part of that.

Regardless of his s***housery Ramos is still one of the best defenders in world football. Just don’t ask ?Liverpool fans to be nice about him, ok? 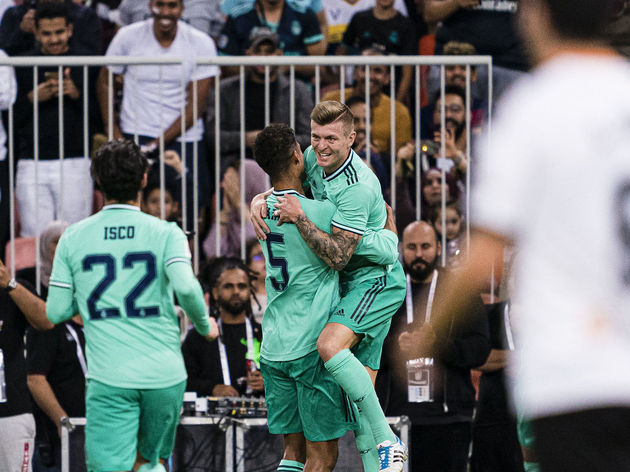 Another name who seems to have been around for years, ?Toni Kroos has had an impressive season after being brought back under the tutelage of Zidane.

Many thought the 30 year-old was finished after an appalling campaign last season, but to be fair to him he wasn’t the? only one underperforming in a Los Blancos shirt.

This time out, he’s looked back to his midfield-dominating best, and is a real contender for the Puskas award after his ‘Olympic goal’ against Valencia in the Supercopa semi-finals. While summer signing ?Eden Hazard has been trying to shed a few pounds, ?Karim Benzema has been left to carry the goalscoring burden of this Real Madrid side once more.

With ?Cristiano Ronaldo now at ?Juventus and Bale on the golf course, Benzema has stepped up with 16 goals in 27 matches this season.

The Frenchman has done well to see off competition from Luka Jovic, and is still as reliable as ever.