Spain recorded their biggest victory of their Euro 2020 qualifying campaign so far, storming to a 7-0 win over minnows Malta.?

As expected, Spain dominated possession for the majority of the game, but it took them 23 minutes to find a way through the stubborn Maltese defence thanks to a scrappy finish from Álvaro Morata. Gerard Moreno had a goal ruled out for offside soon after, but Spain did get their second shortly before the break as Santi Cazorla finished off an excellent passing move. 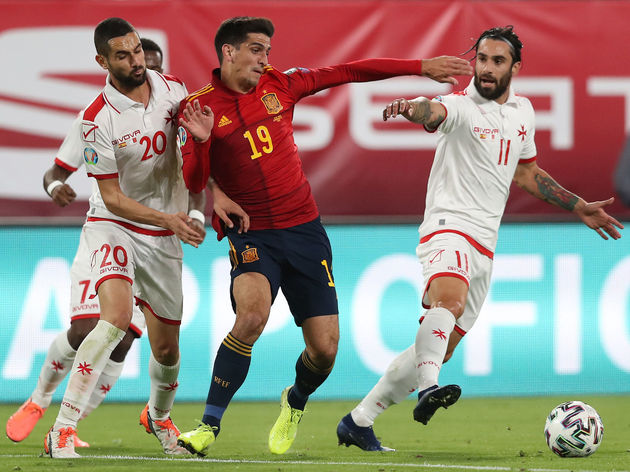 It could have been three before the hour mark, only for a fantastic goal-line clearance from Jonathan Caruana to deny Pablo Sarabia. However, young debutant Pau Torres did make it three with his first touch in a Spain shirt, tapping in from a corner.

Before fans had even sat down, it was four when Sarabia’s composed finish from towards the edge of the area flew into the top corner. Debutant Dani Olmo made it five by rounding the goalkeeper, before Moreno tapped home from close range for the sixth goal.

Jesús Navas saved the best until last though, bending a long-range effort over the goalkeeper and into the top corner to cap off what was an overwhelmingly comfortable victory for La Roja. For Spain, it was a job well done. They were always heavy favourites to win this one, and they did not disappoint. They grew better as the game progressed, and some of the credit has to go to Moreno’s substitutions.

This game was a routine one for Spain, but it gave Moreno the chance to turn to his youngsters. Goalkeeper Pau López was almost forgotten about, while defender Pau Torres and midfielder Dani Olmo were given their senior debuts for La Roja.

Dani Olmo scores for Spain. Just in case I write it here: remember the day. Sarabia has struggled to make a real impact on Moreno’s side, but he certainly made the most of his first international start.

A constant threat down the right side of the field, the Paris Saint-Germain winger was electric throughout. He showcased his impressive composure to net a fantastic first-time finish, but could have had five or six.

He faced very little opposition here, but he did exactly what was asked of him. The 27-year-old might not hold down a permanent place in the team, but he will have given his boss something to think about.

Spain will finish off their European qualification campaign when Romania visit the Wanda Metropolitano on Monday.

On the same day, Malta will hope to halt a run of eight consecutive defeats when they host Norway.