Real Madrid defender Raphael Varane has said Gareth Bale ‘looked good’ and remains ‘focused on his job’ after the forward was met with a hostile reception from home fans on his return to the Bernabeu.

Bale has come under fire from onlookers in Spain for an apparent lack of commitment at club level, which contrasts with his international performances, and the situation was kicked into overdrive during the international break.

Gareth Bale posing with a Welsh flag with “WALES. GOLF. MADRID. IN THAT ORDER” written on it.

Ex Real star Predrag Mijatovic recently said: ‘The first thing he thinks about is Wales, then golf and after that, Real Madrid. I haven’t spoken to him but that’s how he comes across.’ pic.twitter.com/WLEWskgVRy

Having not featured for Real since early October, Bale returned from injury to start twice for Wales and help them towards two victories that secured their qualification for Euro 2020. In the wake of the 2-0 victory over Hungary, Bale and the entire Wales team were seen celebrating with a flag emblazoned with the words ‘?Wales. Golf. Madrid. In T?hat Order’ poking fun at Bale’s alleged list of priorities.

The intended sense of humour behind the display seems to have gone undetected in Spain, however. Media in Spain have ?voiced fury at the 30-year-old’s ‘disrespect’, a sentiment that was echoed by the Real fans when Bale emerged from the bench in the 3-1 victory over Real Sociedad.

Boos and whistles rung out as he replaced Rodrygo, re-emerging every time he touched the ball in his 23-minute cameo. Speaking after the game, Varane was asked for his views on the situation, and wouldn’t be drawn into analysing in detail, except to say he was impressed with Bale’s performance and attitude.

“I don’t want to opine,” Varane told Movistar, as quoted by ?SPORT. “The good thing is that he looked good on the pitch when he came on, focused on the game and focused on his job.” 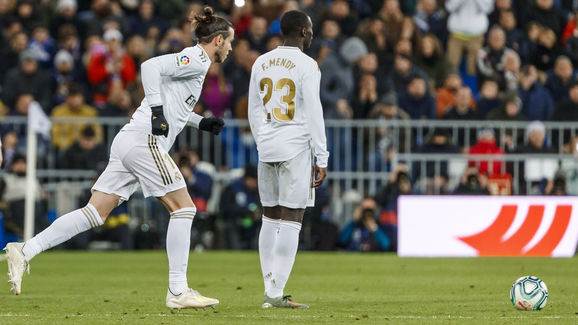 Manager Zinedine Zidane, meanwhile, pleaded for the booing to cease moving forward – asking fans instead to get behind the team.

“I hope [the whistling] doesn’t carry on for the rest of the season,” ?Zidane said. “We want the fans to be with us from start to finish, but we can’t control this. The fans have the right to do what they want, but I’m asking them to applaud everyone.”