With the win against Galatasaray, Zinedine Zidane can rest easy once more. At least until next Wednesday, when everything will be put back on the line once more.

For Real Madrid remain firmly at a fork in the road. To the right, is the familiar path of Jose Mourinho. To the left, the unexplored meadows of Massimo Allegri. Behind them, a trophy-laden track laid by Zidane himself that’s now strewn with the churned out bodies of Julen Lopetegui and Santiago Solari, and the hitchhiking thumb of Cristiano Ronaldo.

Straight ahead lies the bedraggled body of Zidane, defiantly fighting on, but for how long?

At the wheel sits Florentino Perez. And it’s nearing decision time. Thankfully, we here at 90min have graciously decided to offer him the ultimate resource: a look into the future of both the right and left paths.

Without further ado, here are our visions. First up, Massimo. Zinedine Zidane is gone. Florentino Perez pushed him. The day before, Marca ran a headline saying ‘Will the last person to leave the Bernabeu please ensure they take Zidane with them, as some people are mistaking his bald head for a light, and we want this light turned off’, and so, yeah, he didn’t have much choice.

‘It’s Marca Wot Done It, and Allegri Wot Won It’, they ran the next day, and so the Italian’s reign was christened with a Sun rip off. Start as you mean to go on, eh?

His job was to bring the bright lights of fame back to the Spanish capital. His method? A measured, methodical approach categorised by versatility. He has no hardened philosophy. He is beholden to no style, no previous ways of management, of tactics, of life.

This extends to the transfer market, where the smart, stunning free agent moves of yore are replaced with outlandish, outrageous money moves. Cardi Max’s Bodak Blancos, they joke in some parts of the media. Others just call it Galacticos 2.0. These people are tiresome, and should not be trusted.

The worst call it Galactlitcos, and these tasteless few are swiftly sectioned.

Anyway, this is how Sami Khedira comes to make his dramatic return, for the simple reason that an ageing German midfielder needs to be brought in to make Toni Kroos feel better about himself, with Gonzalo Higuain providing the same service to Karim Benzema.

But it’s not just the old fogies that need reinvigorating. The footballing middle-aged and footballing children need some oomph, too.

And this is achieved in a different way. Some are cast aside altogether, like Lucas Vazquez, Brahim Diaz and James Rodriguez, replaced by Nicolo Zaniolo, Federico Bernardeschi and Mason Mount – cause, you know, he hates defending just as much as Hamez.

But other pre-considered cast-offs are brought back into the fold, like Isco, because Allegri is no idiot.

However, the biggest move of the lot – and, to be honest, I don’t know why we didn’t just lead with this in the first place – was the cash plus player move involving Eden Hazard and ?Neymar. Yessir, Madrid gave PSG Hazard, €50m and the giant bag of chips he was eating at the time of the SWAT team extraction at his house in return for the Brazilian. And so it came to pass that the era of Eden Too Much Hazard was no more, and the reign of Neymar Minutes On The Pitch began.

With their January business complete, they rode off into February with renewed vigour, sitting second in La Liga and gleefully awaiting a Champions League last 16 clash with Borussia Dortmund.

This goes well – 5-3 kind of well – with Neymar showing his European conditioning and Mason Mount succeeding in scoring twice and not once retreating into his own half. He never even looked back.

Their reward? A Mount-less Chelsea team who succumb to Real on penalties following a 0-0 stalemate across both legs, having lost both all their attacking impetus and all their defensive deficiency. 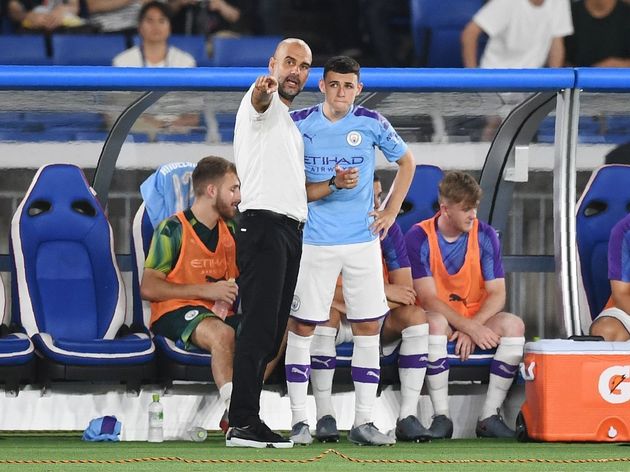 And so to the final. A final against Manchester City. A final where Real must stop Pep Guardiola from securing his first European trophy since 2011. With a first league title in three years tied up in South Carolina two weeks before, the lads are in jubilant mood. And rightly so, as they romp home to a 6-0 victory, after Pep got so inside his own head he fielded Phil Foden in goal and Benjamin Mendy and Kyle Walker upfront.

La Decimocuarta secured with a league double to boot! Over to you, Mou. Jose arrives in Madrid to much fanfare. For the record, Marca still do the whole ‘turn the lights out’ thing, because this is the media, and it was prepped weeks in advance.

Anyway, Perez picks him up from the airport himself, kitted out with a black cap, white gloves and a sign that reads ‘Jose Mour-Success at Madrid-inho’. And the Portuguese tactician quickly makes his presence at the club felt once more, installing Michael Essien as his assistant and scratching Iker Casillas out of every displayed photo he can find.

Surprise, surprise January is once more a fruitful time, though in different ways. Instead of Neymar, Mou brings in ?Kylian Mbappe (wow!) and converts him into a wingback (huh).

Eden Hazard is kept and also converted into a wingback, to cover for Mbappe in the Copa del Rey.

Elsewhere, Mason Mount is glanced over – really?! An overtly offensive-minded player who Mou treats with disdain? But why? – for Cesar Azpilicueta, who Mourinho has cloned three times to finally fulfil his career dream of a team of Azpis. Oh, and they’re all 28 again.

With that scientific marvel completed, Jose is on his way! And a similar European run ensues, with first Inter – who are overwhelmed with emotion at the sight of their Messiah and refuse to field a team in both legs – and then Bayern overcome, with Mourinho’s reducing of Philippe Coutinho to tears in the tunnel probably a factor in the deciding game.

And then it’s Liverpool in the semis. The defending champions. The first leg is at the Bernabeu. Real win 3-1, evoking memories of that famous Inter victory over Barca in 2010 as well as bring harbingers of the Reds’ victory over the same opponents just a year before.

But the second leg is not a sombre affair, with Jose conjuring the ghosts of Chels 2014 past to snatch a 2-0 win, with Mohamed Salah the provider of the ‘slip’ this time, with a neat helping hand from Sergio Ramos, obviously.

And so to the final. A Clasico final, with Barça securing their berth thanks to Fodengate rearing its ugly head once more, this time in the semis.

Adding to the occasion is the fact that this is the first Clasico of the season, with Javier Tebas deciding to simulate the previous ones on FIFA as part of a lucrative new commercial deal. Even with that caveat, Real still go into the game as title winners, receiving the trophy in Moscow as part of a separate deal Mourinho engineered with his pals at Russia Today.

Excitement is building exponentially for the final until – disaster! UEFA deem the designated location in Turkey as ‘problematic’ because of ‘politics’ – in reality, though seemingly sensible, this a ruse, covering up the fact that at the last minute they got a better offer – and shift the game to Pyongyang, North Korea.

The game contains no fans, no journalists, no goals and no shots. Both teams fail to return. Mourinho is delighted. He is home.