Leaders ?Real Madrid took on Granada at the Bernabeu on Saturday in an early season top of the table clash.

Madrid started like a house on fire, going 1-0 up inside the opening three minutes thanks to Karim Benzema, who fired home after a wonderful cross from Gareth Bale. Zinedine Zidane’s men then doubled their lead, courtesy of a glorious finish from? Eden Hazard after a pass from Fede Valverde – finally getting off the mark for Los Blancos after his big money summer move.

Luka Modric then made it three after coming on for the injured Toni Kroos with a great strike from long range, with Hazard turning creator. Granada were far from done though, as they won a penalty soon after Modric’s goal, which Darwin Machis put away past Alphonse Areola. 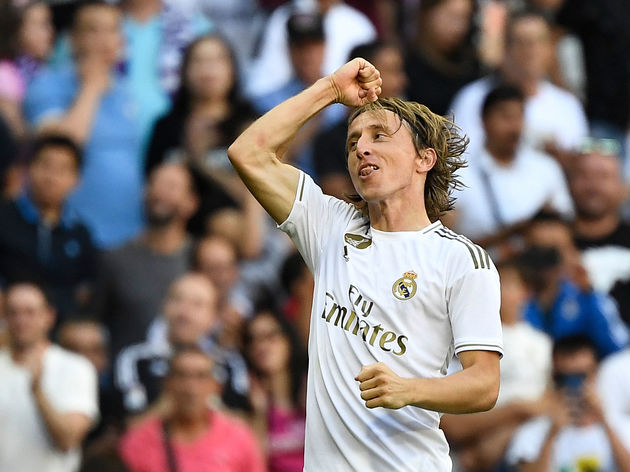 Granada started to pile on even more pressure, and made it 3-2 when Domingos Duarte smashed home at the far post from a corner.

However, Madrid fans’ nerves were finally eased when James Rodriguez slotted home in the dying embers of the game to give Los Galacticos a 4-2 win to increase their gap at the top to four points ahead of their title rivals’ games tomorrow.

Despite a poor start in their Champions League campaign, Real Madrid have been doing somewhat well in the league. They sit top of the table, albeit with a set of far from unconvincing performances.

Madrid were much, much better in the final third than in recent weeks, and the front three seemed to be playing with more vigour and penetration. As well as that, the midfield trio seemed to complement each other extremely well. However, at the back they are still as chaotic as ever, as seen by Granada’s late burst. Madrid can be successful in the league this season, but it is an absolute must for Zidane to sort out the defence.

21-year-old Valverde is slowly becoming a regular in Madrid’s midfield, and boy is he looking good.

The youngster is dynamic, and a constant threat in both boxes. He works hard to recover the ball, and starts attacks with a willingness to run at defenders. He looks a real talent.

To cap off his display, he got the assist for Hazard’s goal, and was crucial in Modric’s too. Madrid have some player on their hands.

Real Madrid has found their third midfielder for the season.

Federico Valverde has been nothing but outstanding for Los Blancos as he’s set to cement his place on starting eleven ahead of unbelievably talented footballers. pic.twitter.com/g6aCb21IGi

I love Modric and Kroos but with Fede Valverde in this form, I cannot imagine dropping him for any of them…

Real Madrid looked much better offensively today, but they need to keep in mind that it was ‘just’ Granada. Tougher tests will come.

However, they continue to look a shambles at the back, leaking goals for fun. But with a game against RCD Mallorca to come, their defence shouldn’t suffer too many problems, and they can look to stretch their lead at the top.