Real Madrid were held by Villarreal ?at

The hosts had to soak up some early pressure but took the lead on 12 minutes through Gerard Moreno. Sergio Ramos lost possession and Villarreal worked to force Thibaut Courtois into a save – but he was only able to spill it into the path of the striker.

As the half progressed, Zinedine Zidane’s men were forced onto the back foot, with the home side asserting themselves on the match. Samuel Chukwueze and Toko Ekambi had chances to extend their lead but failed to take them. Karim Benzema carved out an opening for himself, but he saw his shot cannon back off the post.

However, on the stroke of half time, the away side found an equaliser thanks to Bale’s tap-in. Dani Carvajal played a delightful one-two with Luka Jovic, before squaring the ball for Bale to find the net. equaliser, they required one player to step up and provide some quality.

This came from ?Gareth Bale once again, who bagged his second goal of the night with five minutes remaining – a low drive into the bottom corner.

However, remarkably, the winger was then sent off in the last minute for a second bookable offence.

Following Barcelona’s tame draw against Osasuna on Saturday, Zidane’s men had a real opportunity to lay down a marker and open up a three-point lead on their fierce rivals as they head into the international break. However, they were unable to take the chance.

The manager opted to go for a 4-4-2 formation, with Luka Jovic partnering Benzema up front. This was supposed to help Los Blancos pose a greater threat and provide more options for the wingers, but it didn’t play out this way. Instead, the midfield was overrun and, as a result, there was no fluency to the play. Casemiro was dispossessed on countless occasions in the first half, leaving players such as Santi Cazorla with the chance to run and attack a frail defence. 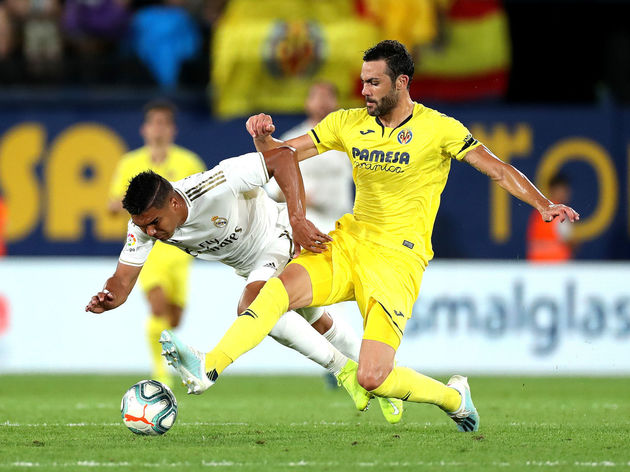 After Bale had levelled the score, it was as though it settled the rest of the team down. Toni Kroos and Casemiro began to control the midfield and were able to feed the front two, who were beginning to link up well with each other.

In terms of the defence, it will be highly worrying that there were so many individual errors – and these were punished. Sergio Ramos was caught dwelling on the ball for the opener and the home side wasted no time in working it Toko Ekambi, who managed to get his shot off. It was meant to be a comfortable save for Courtois, but he parried it straight into danger – and Moreno was ruthless in his finish. The defence will need to be tightened up if Zidane is seeking a successful season.

STAR PLAYER – It was a lacklustre performance from ?Los Blancos, with the players struggling to adjust to the fast tempo and high press of the home side.

However, it was ?Gareth Bale who was the standout performer.

In the opening minutes, the Welshman whipped in a delicious ball that caused mayhem in the home side’s penalty area. He was quiet in spells, but his quality shone through and he made the difference when his side needed him. The winger saw play developing on the right hand side, and made a powerful run into the centre of the six yard box to meet Carvajal’s pass for the equaliser. It was exceptional reading of the game to anticipate where the ball would end up.

His influence continued to grow throughout the game, as he fed Benzema through with a deft header. And although the forward was able to finish, it was ruled offside. After Villarreal restored their lead, Real Madrid needed someone to produce a moment of magic. Bale’s low strike five minutes from time was exactly that.

Admittedly, the forward was sent off for two bookable offences, which places a dampener on his performance. However, overall, It was a fantastic evening for the former outcast, and it appears as though Zidane will continue to look towards him.

Good to see Bale enjoying his football & showing Zidane his “decision” to keep him was well though thro!!

Following the international break, Villarreal will welcome Leganes to

Similarly, Real Madrid will play host to Levante in La Liga on Saturday 14 September, before they kick off their Champions League campaign away Paris Saint-Germain in midweek.