It may not sound like much of a big deal, but with Tacón taken over by Real Madrid this summer and set to adopt the club’s famous name and branding as of 2020, this is technically now the first Clásico that Spanish women’s football has ever seen.

There is already a club by the name of Madrid CFF in the Primera División, playing in white, as it happens. But there is no affiliation to Real. Tacón, meanwhile, are to play their home game at Ciudad Real Madrid, the club’s training complex in Valdebebas.

While Barcelona have been around in some form or another for 31 years, have been crowned Spanish champions four times since 2011 and are an emerging power at European level, Tacón are a young club and relatively unknown after forming as recently as 2014. 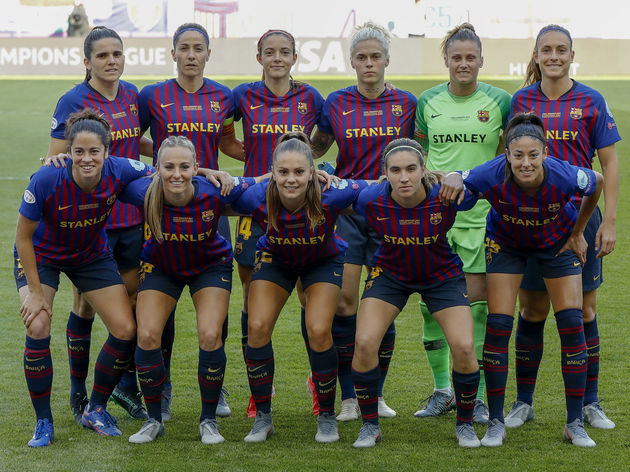 Real have never previously operated a women’s team, but it hasn’t stopped Tacón from making their mark in order to establish themselves among Spain’s elite.

Kosovare Asllani and Sofia Jakobsson, both stars of the 2019 Women’s World Cup as Sweden finished third, were big name arrivals in the Spanish capital in July. Brazilian defender Thaisa, another player that feature at the World Cup, has joined from AC Milan. Tacón were then also able to tempt England international Chioma Ubogagu to Madrid from Orlando Pride.

When Asllani, formerly of Paris Saint-Germain, Manchester City and most recently noted Swedish side Linköpings, tweeted about her move to Spain shortly after the World Cup it was clear the 30-year-old was excited about the future prospect of turning for ‘Real Madrid’.

?? Proud to announce that I’ll be the first official signing for Real Madrid/Cd Tacon.
Excited to write history, to help build and be part of this teams journey from the very start.
It’ll be a dream to wear the most beautiful jersey in the world starting next season. HALA MADRID pic.twitter.com/QnJDSE8wqH

But to get anything against Barcelona this weekend, Tacón will have their work cut out. The Catalans boast some of the finest players in the world, with 2017 Best FIFA Women’s Player and 2019 World Cup finalist Lieke Martens among their ranks.

Nigerian forward Asisat Oshoala was named BBC Women’s Footballer of the Year in 2015 and is still only 24 years of age, while Norwegian maestro Caroline Graham Hansen joined the club this summer, as did returning Spain international Jenni Hermoso.

Alongside Hermoso, many of the national team’s top talents play for Barcelona.

Yet despite Clásico connotations, the rivalry will take time to develop. The rivalries that have developed over decades in men’s football are often transplanted to women’s football and can sometimes have a forced or manufactured feel to them.

Women’s football produces its own rivalries and, for now, at least, Barcelona are unlikely to view this weekend’s clash with Tacón as the biggest game on their calendar. That is reserved for clashes with Atletico Madrid, who have won the Primera División title in each of the last three seasons, and are the single biggest reason Barcelona haven’t been champions since 2015.

Tacón, however, might think differently as this weekend is the start of a whole new chapter in their hitherto very short history.