A double from Rodrigo Moreno made it six wins from six for Spain in Group F, as they moved another step closer to Euro 2020 qualification at the expense of a rigid Faroe Islands side.

The game started in painfully predictable fashion, with the visitors – playing with a narrow back five that adapted into a back seven when the wide midfielders dropped back – adhering to their unyielding defensive shape at all costs.

But after a frustrating first ten minutes, the opener came after visiting captain Atli Gregersen got the ball caught under his feet on the edge of his area. The tenacious Thiago sensed the opening and his challenge broke kindly for Mikel Oyarzabal, who squared for Rodrigo to tap it in.

The floodgates didn’t quite open as Robert Moreno might have hoped from there, and a shot on target from Joannes Bjartalid briefly had Spanish hearts in their mouths, although it was easily held by ?David de Gea.

The home side huffed and puffed however, and after a generally lethargic first half display was brought to an end, the game was put to bed early in the second when Rodrigo came in from the right and saw his left-footed effort deflect in off Rogvi Baldvinsson.

The remainder of the second half saw Spain prioritise possession and tiring out the visitors, but just as it looked like two may have to do, a late double from Paco Alcacer put a couple of cherries on the cake.

All-in-all it was a routine victory for a fringe Spain side, who maintained their 100% record with minimal fuss, and moved seven points clear of Sweden at the summit of Group F. Robert Moreno rung in the changes for this one, looking to use the entirety of his squad and get a look at some of his fringe players against Group F’s weakest side.

In total there were nine changes from the narrow win in Romania, with only Rodrigo and Sergio Ramos – now Spain’s joint-record cap holder with Iker Casillas after making his 167th appearance – keeping their place in the side. De Gea came back in for his first appearance in four matches, while Suso made only his fifth international appearance after missing out on the last two squads. 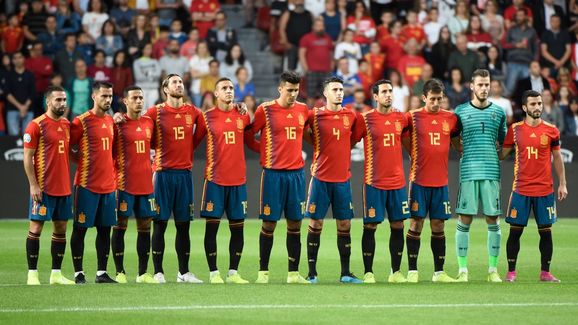 All the changes left the side looking a touch disjointed, although they could scarcely be accused of being negative. Their defensive line opted for the unusual strategy of pushing deep into the Faroes’ half, but while their possession sat close to the 75% mark throughout, they failed to translate their statistical dominance into many clear-cut chances.

The second half was far superior to the first in terms of tempo, although the same issues persisted with their lack of a cutting edge. They managed to put the game to bed through Rodrigo though, and the Valencia striker will be happy with his contributions.

A late double from substitute Alcacer perhaps flattered Moreno’s side, who struggled to break through the Faroes’ back line until the very death of the game, but all-in-all it’s job done in what was only the new boss’ second game in charge.

It would be easy to hand this one to the two-goal hero Rodrigo, but reading between the lines, it was Thiago who made things tick for his side and bound together a midfield who often looked like perfect strangers.

Only watching the Spain game for Thiago Alcantara! So pleasing on the eyes the way he plays. An artist, magician ?

His tenacity made the first goal, and his vision created the second and third. If it wasn’t for the Bayern man’s magic then this could have been a very tough afternoon.

It’s back to club duty for now, with Spain next in action when they travel to Scandinavia for a double header with Norway and Sweden in mid-October.

Faroe Islands, meanwhile, while be looking to pick up their first points of the campaign when they host Romania and Malta in the next break.