?Real Madrid return to action in La Liga on Saturday as they welcome Levante to the Santiago Bernabeu.

Los Blancos are yet to be defeated in their opening three matches, but they have drawn two of those against Real Valladolid and Villarreal. Formerly outcast Gareth Bale rescued his side in their last match against the latter, as he bagged a brace before being sent-off in the final minute.

Levante, in contrast, have made a strong start to the new season, picking up six points from their first three matches. Paco Lopez’s have won their last two games and will come into this one with great confidence.

Tickets for the game are, as ever, available on both teams’ official club websites, though membership is required in order to purchase. In terms of resale, both teams provide the option to make season tickets available for others to use, if a supporter is unable to attend the game themselves.

Luka Jovic is a doubt for ?Real Madrid for the match, after he picked up a knock on international duty. The Serbian FA said that he will not feature for his country in their match against Luxembourg on Tuesday, casting doubt over his availability for Los Blancos’ match on Saturday. They did also state that it was a ‘minor’ injury and they are being cautious.

However, four players are said to have overcome their respective injuries and are set to be available for selection against Levante.

Youngster Rodrygo Goes (hamstring), James Rodriguez, Brahim Diaz (both muscular) and Eden Hazard (thigh) have all been working hard and should all be in contention. This comes as a major boost considering the amount of injuries that were mounting, with Isco and Marco Asensio still sidelined, while Bale will miss the game through suspension. Borja Mayoral will be unable play as he is currently on-loan from his parent club Real Madrid, meaning experienced forward Sergio Leon will most likely come into the side. Aside from that, Levante have a fairly clean bill of health and Paco Lopez will have the chance to field his strongest possible side.

The two sides have faced off against each other on 23 occasions, with Real Madrid, unsurprisingly, holding the superior record.

The Spanish giants have won 16 tussles, compared to Levante’s four. The two teams have also played out a draw on three occasions. 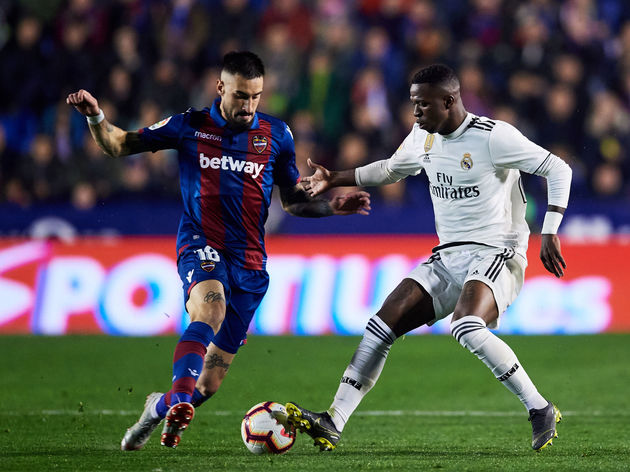 The last meeting between the two saw a disjointed Los Blancos side edge past Levante by two goals to one back in February. Penalties from Karim Benzema and Bale on that occasion were enough to help see them over the line, despite Roger netting for the home side. Lopez’s men, on the other hand, have made a strong start to the new season, picking up six points from three matches. Following an opening day defeat against Alaves, the team has gone on to put in two impressive displays to claim victories against Real Valladolid and Villarreal – neither of whom Real could beat.

Here’s how both sides have performed in their last five matches.

Zidane will be demanding more from his players and will be hoping his side can turn over a new leaf as the international break draws to a close.

The return of Hazard and Rodriguez will benefit Madrid greatly, and there will be more of an expectancy to put in an accomplished performance. Levante have started the season strongly and currently sit higher than Real in the table, but Los Blancos will be eager to claim all three points here.