?Real Madrid travel to face Sevilla on Sunday evening in La Liga and all eyes will be on Zinedine Zidane and his men to see how they bounce back after a humiliating drubbing at the hands of Paris Saint-Germain in the Champions League in midweek.

Los Blancos are yet to lose a match in the league this season, but they currently sit fourth in the table having drawn two of their four matches.

They face a Sevilla side who are enjoying a fine start to the new season, topping the table and two points clear of their next opponents.

The pressure is mounting on Zidane and he will be looking for a strong showing from his men as they bid to get their season back on track. With that in mind, here’s our take on how Los Blancos should line up on Sunday. Thibaut Courtois (GK) – Another shaky night for Courtois in Paris on Wednesday. The Belgian has continued to concede goals at will and it’s proving to be a real cause for concern. Courtois’ performance was further scrutinised as his counterpart in the PSG match was Keylor Navas – a man who left the club in the summer due to insufficient playtime.

Nonetheless, Courtois is the number one choice and should retain his place in the side. He can expect a busy evening against an in-form Sevilla side.

Dani Carvajal (RB) – Carvajal struggled against a lethal PSG side on Wednesday, but he will most likely keep his spot in the team. The right back will be aware of the threat that his next opponents carry and his role will be key on Sunday if Real wish to come away with the points.

Raphael Varane (CB) – Varane is one of the best around in his position. His speed, ability to read play and aerial threat make him a forward’s nightmare. The Frenchman may have been part of the side that fell to the ?embarrassing 3-0 defeat on Wednesday, but he will keep his place in the side.

Sergio Ramos (CB) – A no-brainer. Ramos skipped the match against PSG through suspension and it’s safe to say that his commanding presence was sorely missed. To put his importance to the side into perspective, Real Madrid’s

Ferland Mendy (LB) – With Marcelo an injury doubt, Mendy may well keep hold of his spot for the upcoming match. The left back didn’t have his best game in midweek – along with most others – but he is already proving to be a useful addition to the squad. His pace going forward allows him to support attacks and provide an outlet, which could prove useful on Sunday. Casemiro (CM) – Casemiro is regarded as one of the world’s best holding midfielders, and with good reason. The Brazilian has proven his worth on countless occasions and he will need to be at his best on Sunday against a potent

Toni Kroos (CM) – Kroos has the ability to dictate the tempo of a match and control the game from midfield. He can play an intricate one-two or he can spread the play with a cross-field ball that opens up the space. Zidane will look to Kroos on Sunday to set the tempo and intensity of the performance, both on and off the ball – something that the Frenchman questioned after the match against PSG.

James Rodriguez (CM) – With Luka Modric a major doubt for the next match, James will most likely have another chance to impress. The Colombian was one of the few who performed well on Wednesday, despite the heavy thrashing. He has already proven his worth to Zidane this season and his creativity will be crucial on Sunday to help supply the forwards. 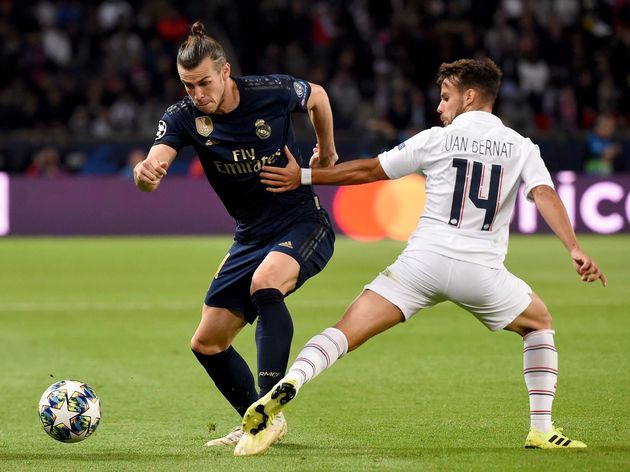 Gareth Bale (RW) – ?Bale has been one of Real Madrid’s best players this season, it’s as simple as that. Once deemed surplus to requirements, he is now a pivotal member of this squad. The Welshman had a goal ruled out on Wednesday, but his overall performance was, once again, very impressive. His manager will be hoping he can continue his fine form on the weekend.

Eden Hazard (LW) – ?Hazard made his Champions League debut for Los Blancos on Wednesday and it was, well…underwhelming. The Belgian superstar hasn’t exactly hit the ground running but there is no disputing his quality. There will be an expectation on Sunday that Hazard provides some much-needed quality against Sevilla to help ease the frustrations.

Karim Benzema (ST) – Benzema has had a strong start to the new season and is managing to keep Luka Jovic out of the side. He has already come up with some important goals and Zidane will look to him throughout the season to provide a cutting edge.