Sorry, that was just me salivating over my keyboard about the prospect of the first Madrid derby of the 2019/20 La Liga season.

The two giants from the Spanish capital will renew rivalries on Saturday night with both sides looking to capitalise on ?Barcelona’s faltering start to stretch – or in ?Atléti’s case create – their fairly healthy lead at the top of the pile. It hasn’t been long since their last encounter – the quite frankly bonkers ‘friendly’ in the USA in July. Both sides had players dismissed (including Diego Costa, obviously) as the match – and Real’s defence – descended into chaos and the Rojiblancos eventually ran out 7-3 winners.

Zinedine Zidane will be hoping for something *somewhat* better on Saturday evening, while Diego Simeone would *probably* love a repeat. The one thing that is certain is that it will be a heck of an entertaining match.

Simeone will be furious that he will be without Alvaro Morata after his number nine picked up a needless red card in the win over Real Mallorca in midweek.

The former Los Blancos striker is now suspended, so he joins long-term injury absentee Sime Vrsaljko in missing out. Thomas Lemar is also a doubt having missed the trip to Mallorca with a hamstring injury. Meanwhile, Zidane could be without midfield metronome Luka Modric who is still recovering from a muscular problem, while Isco (hamstring) and Marcelo (neck) also look unlikely to feature having missed five and three games respectively.

Ferland Mendy has picked up a fresh groin injury and is expected to be out for two weeks, so left-back could well be a problem area for Zizou on Saturday night.

Historically ?Real Madrid have the edge in this fixture, but Atléti’s resurgence in recent seasons means this fixture is far from predictable.

That is demonstrated by the fact their last five competitive meetings have resulted in three draws and a two-goal win each. 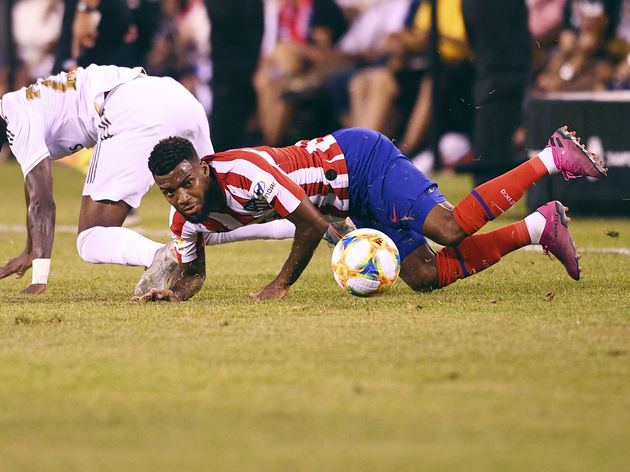 In their 222 meetings, Real have 110 wins, while the hosts have 56 and there has been the same number of draws.

The hosts come into this game having recovered their form in the midweek win at Mallorca. Another battle is on the cards – expect goals, red cards and a lot of action.

As previously mentioned, this match has become notoriously hard to predict in recent years. That means home advantage could have a huge bearing.