Prepare to have your world rocked to its very foundations.

It turns out we’ve all been mispronouncing the names of some of football’s biggest stars. A number of the players on this list are tongue-twisters, but there are a few who have a deceptively difficult name to get right. ?UEFA have published a list of all the tricky ones taking part in this season’s ?Champions League, with a number of surprising inclusions.

Here, 90min takes a pun-tastic look at nine of the best. The Polish right-back is preparing for his eighth attempt at claiming Old Big Ears, yet his is a name many will be mucking up, despite the fact he’s been playing for a top club since 2010.

Nine years ago, Piszczek joined ?Borussia Dortmund on a free from fellow ?Bundesliga outfit Hertha Berlin and has collected four major honours over the course of 324 appearances for BVB.

Nevertheless, the only part of his name most people will have nailed is the ‘check’ sound at the end. It’s doubtful many called him ‘Woo-cah’ instead of ‘Lucas’. Is it a name or a political statement? ?Chelsea new boy Pulisic sounds like an anti-establishment chant, according to UEFA at least.

The only explanation is the name has been Americanised from its Croatian origin, removing the ‘ich’ and replacing it with an ‘ick’. He probably should have stayed true to his roots in that regard, there’s something amiss something about the new pronunciation. The greatest footballer currently playing in the ?Premier League – as confirmed by his ?FIFA 20 rating – is rarely labelled correctly.

Apparently, Kevin is not a ‘De Br-oi-ner’, he’s a ‘De Brurner’. Then again, it doesn’t really matter how you say his name; the Belgian is always pitch-perfect for ?Manchester City. 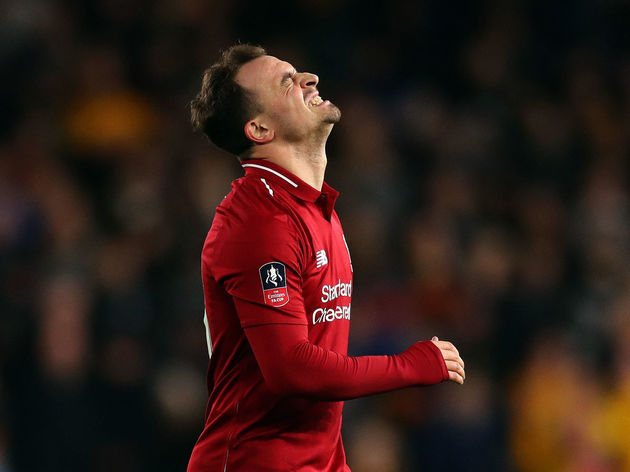 Yeah…I’m not buying this one. This is a load of Shat-cheery from those at UEFA.

The vertically-challenged Shaqiri has been dubbed Big Shaq by ?Liverpool supporters and he has indeed been hot for the Reds since arriving last year.

Hopefully, the Anfield crowd don’t adapt that nickname to fall in line with what is – apparently – the right way to say Shaqiri. Felix’s parents must have been extremely excited when they took the youngster to the registry office, oohing and aahing as they told the clerk his name.

however, ?Atletico Madrid fans are still waiting to be wowed by the Portuguese as he begins his career at the Wanda Metropolitano Stadium.

As for his surname, it’s just a little too unexpected for my liking. Bye, Fay-lish(a). Admit it, when you saw van de Beek score in the first leg of the Champions League semi finals, you thought it was pronounced ‘beak’. It’s more like the end of ‘sauerkraut’ – just swap the ‘t’ for an ‘s’. He will certainly be a very sour Kroos if the national team and his club side Real don’t make amends for their dire performances in recent seasons. Koke’s looks a fairly simple name to get right, but there’s a twist, with no heavy emphasis placed on either vowel.

It’s not entirely clear why an ‘a’ sound is created from the ‘e’. Ordinarily in Spanish