Karim Benzema opened the scoring for Real, following some wonderful trickery by Bale to skip away from opposition defenders. Luka Modric was then shown a straight red card in the second half for a late challenge on Denis Suarez, but Toni Kroos eased the nerves with a sensational drive from 25 yards. Lucas Vazquez then rounded off proceedings with a clever finish.

Celta were able to grab a consolation, but Zidane was very pleased with his team’s performance. ?Bale had an outstanding game upon his return to the team, creating the first goal. His performance drew numerous questions from reporters after the game, who were keen to know more about his future. Zidane told reporters per Marca:

“Everyone we have helps us to think positively…you have to focus on the season, nothing more. [Eden] Hazard’s injury was bad luck for us, but it didn’t change the idea we had with Bale starting the game.

“Gareth, James…everyone here is going to defend the shirt the way it deserves to be.”

Bale’s future has been one of the hot topics of the summer, following his fallout with Zidane. It seemed as though it would finally end with the Welshman leaving the club, but Zidane has since performed a U-turn and now appears set to keep hold of the winger.

Zidane on How They Performed After Modric’s Red Card 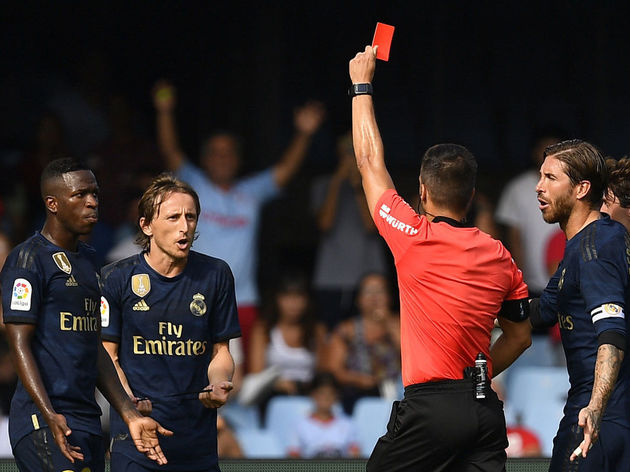 Modric was shown a straight red card, after he put in a late challenge on Suarez. While Zidane was coy over his stance on the decision to send Modric off, the Frenchman was willing to discuss how he felt ?Los Blancos reacted.

He added: “We played a very complete game from the start. And did so well with 10 players. We suffered to get the result…

“In defence we were very good, and then we know what we can do when we have the ball. I’m happy after pre-season, which was complicated in terms of results, but was good in terms of work.” Following their respective results, it’s the first time in 818 days that Real Madrid have been above rivals Barcelona in the La Liga table.

Barcelona lost away at Athletic Club thanks to Aritz Aduriz’s stunning overhead kick, but Zidane opted not to express joy over starting the season ahead of the club’s bitter rivals, instead directing the praise back to his players.

He said, via ?AS: “We’re focused on us. What’s important is picking up three points. The players deserve to be congratulated.”