Monday 1 July marks the beginning of Wimbledon fortnight, where the world’s best tennis players battle it out on grass to secure the oldest and most prestigious of the Grand Slam championships.

As it happens, a number of the best tennis players are also huge football fans. Here’s a look at who they support.

World number three and possible tennis GOAT Roger Federer is a big supporter of FC Basel in his native Switzerland.

Federer attends the home games at St. Jakob-Park in Basel whenever he has time away from tennis.

The 20-time Grand Slam winner was approached for the president’s post a few seasons ago but he declined. It is believed that the Swiss team hope to have the tennis legend on their board of directors once he retires.

?A native of Mallorca whose uncle famously played for Barcelona, Nadal has mixed loyalties, supporting both Spanish giants ?Real Madrid and RCD Mallorca.

The world number two has been spotted at the Bernabeu a number of times watching Los Blancos in ?La Liga and the ?Champions League. ?The Express

“Talking about that now is a bit of a utopia but if you ask me, of course, I would like to be president.”

He was however also pictured celebrating in the crowd as Mallorca were promoted back to La Liga last month. When the 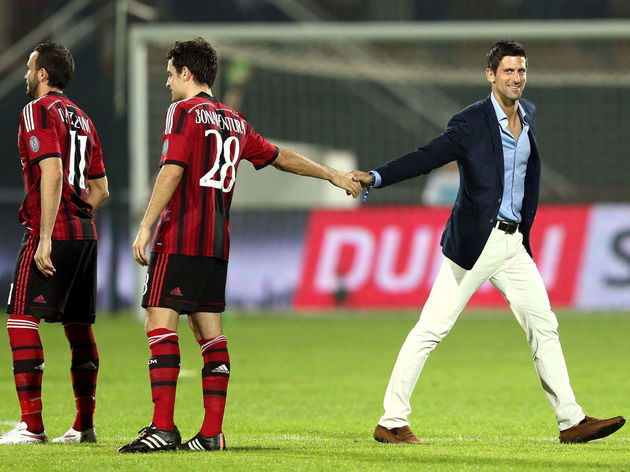 ?World number one Novak Djokovic is a fan of Italian giants AC Milan. The Serbian tries to attend their games when he has time off but says he still follows them religiously whilst playing on the tour.

Djokovic spoke about AC Milan a few years ago saying, “I love all the traditions of the club and I know a few guys on the team. I love coming to watch the games. The atmosphere is just amazing.”

Andy Murray commented saying, “Ever since my grandad played for Hibs in the 1950s, my family have supported the club.

“Football is a huge passion of mine and I’m looking forward to working with the club and with Ryan and Fraser and helping them with every aspect of their careers.”

Austrian Dominic Thiem is a huge ?Chelsea fan and claims to hardly ever miss a game.  The world number four in the world also follows Naby Keita and Sadio Mane’s old club

In an interview, Thiem said: “Football is my passion. I watch as many matches as possible in the European top leagues, I hardly miss a Chelsea match,”

Both Nadal and Thiem have some good football skills themselves as seen in the video below!

Former US Open winner Juan Martin Del Potro supports local team Boca Juniors when he isn’t on the court and is a regular at the famous Bombonera stadium in Buenos Aires.

The 6ft 6in Argentine, who is also a fan of Italian champions ?Juventus, is a close friend of Mauro Camoranesi, who grew up in the same town.

Referencing Boca’s Copa Libertadores final defeat to River Plate he said: “Today I cry for things that surprise my friends, like the River vs Boca, but it’s better not to talk about that.” Edmund got to meet ?Jordan Henderson

Australian Nick Kyrio is a massive Tottenham Hotspur fan and turned up sporting their new shirt on the first day of Wimbledon back in 2017.? Kyrgios told Tottenham’s website: “Whenever Spurs are playing I try to watch them, even with the time difference in Australia.

“The last match I watched was about 2am in the morning!”