?On 16 July 2000, Florentino Perez was first elected as president of Real Madrid, and the 19 years since have been nothing short of extraordinary.

Barring a brief absence between 2006 and 2009, Perez has been directly or indirectly responsible for some of Real’s greatest moments in history, through the historic signings he has made during his time in charge at the Santiago Bernabeu.

Here are seven of Perez’s best signings since he first took over in 2000. Who knows where Florentino Perez would be without Luis Figo. Having previously failed to win the presidency of the club, Perez promised he would sign Figo from arch-rivals ?Barcelona if he was elected in 2000. He was, and he did.

?The Portuguese winger’s €62m move to ?Los Blancos is one of the most controversial deals of all time, but it kick-started an incredible successful era for Real.

Figo lifted two ?La Liga titles and also won the ?Champions League in 2002, but it was his Ballon d’Or win in 2000 which really set the stage for Figo – and Perez – to dominate world football. Perez’s policy of one blockbuster season per summer led him to ?Juventus’ Zinedine Zidane in 2001. A world-record €77.5m deal was quickly struck for Zidane to head to Madrid, and the rest is history.

He won the Champions League in his first season at the club with that volley against Bayer Leverkusen?, before adding the La Liga title the following year.

He retired in 2006, before transitioning into management with Los Blancos. With three consecutive Champions League titles between 2015 and 2018, it’s safe to say that Perez’s initial decision to sign Zidane in the first place is still paying off. Perez may have not really been involved in the deal to sign ?Cristiano Ronaldo in 2009, but he did get his own Ronaldo seven years earlier.?

The original Ronaldo was already a star by the time he sealed his €46m move from ?Inter to Real in 2002, but Il Fenomeno continued to astound in Madrid. He fired 104 goals in 177 games, leading Real’s scoring charts in each of his four full seasons at the club.

He lifted La Liga trophy twice, before leaving for ?AC Milan in 2007. 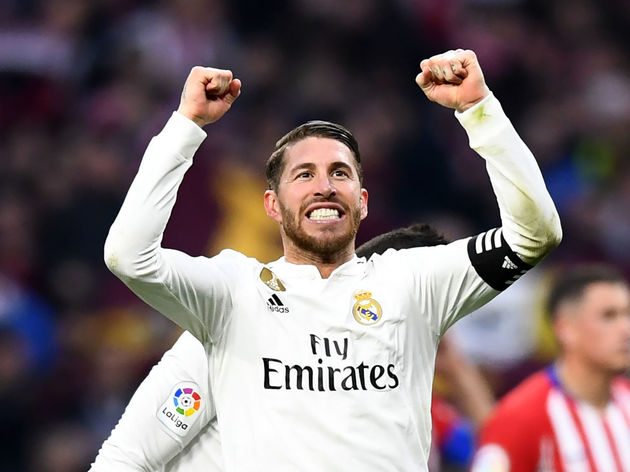 With Perez focusing on acquiring the world’s top talents, he often forgot to look closer to home. In the 2005 summer transfer window, Perez parted with €27m to sign ?Sergio Ramos from Sevilla, with the defender becoming the first – and only(!) – Spanish signing of Perez’s first stint as president.

His transfer may have been an anomaly, but what an anomaly it was. In Madrid, Ramos blossomed into one of the world’s finest defenders?, and the same can still be said about him to this day.

His trophy cabinet is utterly outstanding. With four La Liga titles and four Champions League triumphs to his name, Ramos will undoubtedly be remembered as one of the all-time greats, and he likely still has a few years to add to that legacy. When Perez returned in 2009, he was greeted by the news that a deal was effectively arranged to sign Cristiano Ronaldo already (hence Ronaldo’s omission from this list). However, Perez wasted little time making his own signing in the form of Lyon’s ?Karim Benzema.

The Frenchman joined for a fee of €35m, but endured a bit of a tricky start in Madrid. Fortunately, that didn’t last long, and he soon lived up to his billing as one of Europe’s most prolific forwards.

His tally of 222 goals for the club puts him fourth on their all-time scoring charts, and he is definitely not done just yet.? Perez fought off a number of European signings to secure a €10m move for Lens starlet ?Raphael Varane in 2011, and it could be the finest €10m Perez has spent to date.

After eight years at the club, Varane is now widely seen as one of the world’s top defenders, and he has been at the top of his game for a number of seasons. He would generate an astronomical profit if sold, but Real will want to lose him as he effectively guarantees success.

Defenders like Varane are few and far between, and a lot of credit must go to Perez for working tirelessly to ensure he arrived in Madrid. In the immediate aftermath of ?Luka Modric’s £30m move from ?Tottenham Hotspur in 2012, Perez faced a huge amount of criticism. The midfielder was thoroughly underwhelming to begin with, but Perez clearly knew exactly what he was doing.

Once he got going, there was no stopping the diminutive Croatian. He became a core part of the side who won four Champions League titles between 2013 and 2018, and his ultimate crowning glory was a well-deserved Ballon d’Or victory in 2018.

Not only did Perez strike the deal for Modric, but he opted to persevere with him through his poor performances because he knew the kind of player Modric could become. ?