It’s 2018, the date is May 26th, the venue is the Olympic Stadium in Kyiv, the event is the Champions League final and Gareth Bale has just done something remarkable.

Three minutes after being brought on as a substitute for Real Madrid against Liverpool, he rises to meet a Marcelo cross from the left-hand side.

Only he is not rising to meet it with his head.

Instead he is performing a bicycle kick, manoeuvring his body to connect perfectly with the ball with his left foot high in the air, sending it soaring over Loris Karius Real

By the end it would be three for Los Blancos, with another goal from the Welshman securing victory for Zinedine Zidane’s side and making them champions of Europe for the third year in succession.

However, despite his sensational display, Bale was only a part of the story in this Champions League final.

There were plenty of other players who would share the headlines after this one. It all started fairly evenly, both sides clearly respectful of each other’s attack and choosing to feel their way into the match.

The game then exploded into life after 15 minutes, as Real talisman Cristiano Ronaldo Liverpool

While that early scare may well have made Reds fans nervous, it will have been nothing compared to how they felt just before the half-hour mark. 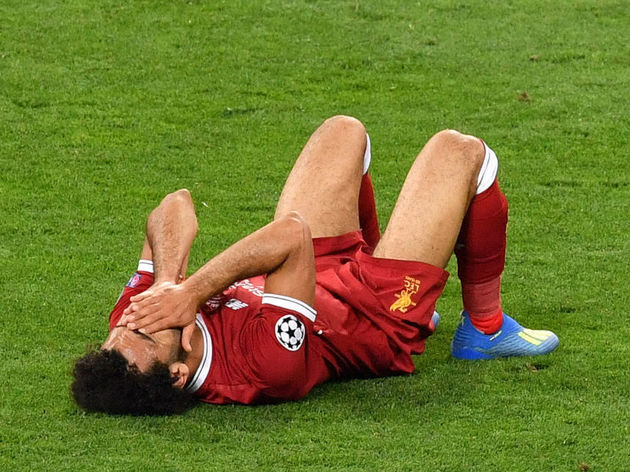 The tears streaming down the forward’s face confirmed the fears of his supporters. The man who had scored 44 goals for them during the season was to play no further part in the biggest game in club football.

The loss of their most dangerous attacker unsettled Jurgen Klopp’s side and Real almost took advantage before the half-time whistle, with Karim Benzema

The Frenchman would not have to wait long to make his mark, however, as Reds stopper Karius began a sequence of events which would ultimately lead to the worst night in his professional career.

A seemingly innocuous clip over the top from Toni Kroos Benzema, who had made a token attempt to latch on to the Kroos pass, found himself stood right next to Karius who inexplicably decided to try and roll the ball out to his centre-back, Dejan Lovren

The striker, alert as ever, simply stuck out his foot to block the ball and watched on as it trundled into the empty net.

A James Milner corner was nodded back across goal by Lovren and there was Sadio Mane, the man Liverpool needed to step up in the absence of Salah, ghosting in to place the ball past Keylor Navas from inside the six-yard box and get his side back on level terms.

The drama was now coming thick and fast as both teams started to tire and spaces began opening up at either end of the pitch.

With 60 minutes on the clock, up went the substitution board.

We all know what happened three minutes later. Perhaps the best European Cup final goal of all time was scored and Real were on their way to a 13th crown.

The Spanish giants showed their class once they had retaken the lead, with Kroos and his midfield partner Luka Modric

While the show seemed to be ending without any more major incident, two of the game’s major characters still had one more dramatic act to conjure up between them. With just seven minutes of normal time to go, Bale lined up what many assumed to be a speculative attempt from 30 yards out.

What it turned out to be was the final nail in the coffin of Karius’ Liverpool career.

At least it was until he let it slip through his fingers and into the back of the net, sending the Madridistas into delerium and knocking the stuffing out of the English challengers.

With that second lapse of concentration from the German went his club’s chance of picking up their sixth Champions League title. ‘Old Big Ears’ was to be heading back to Madrid for another year.

Club football’s showpiece event is always a dramatic affair but this most incredible of finals will go down as something different for many. For some it would have felt like a comedy.

For Real, and Bale in particular, it would have felt like a superhero movie.

For Karius, Klopp and everyone associated with Liverpool FC – a horror show. Still at least they can make up for it this year.

And this time, Karius will be on the beach.