?Real Madrid’a nightmare season continued as they were beaten 1-0 by relegation-battlers Rayo Vallecano in La Liga on Sunday night.

A controversial penalty was awarded to the home side midway through the first half when Jesus Vallejo pulled back Javi Guerra as he tried to latch onto a cross. Adrian Embarda dispatched the resulting penalty, with Zinedine Zidane’s side rarely looking like levelling matters thereafter. The hosts had the better of it early on, penning ?Los Blancos back in their own half and bombarding the box with delicious deliveries from out wide. However, Mariano almost broke the deadlock against the run of play after latching on to a Dani Carvajal cut-back, only to lash his effort straight into an onrushing defender with the goal at his mercy.

Former ?Manchester City youngster Jose Pozo should have given Rayo the lead soon after, but could not find a way past Thibaut Courtois when through one-on-one, as the Belgian spread himself to block the forward’s low side-footed shot.

Then VAR reared its head. Guerra was unable to reach a ball skimming across goal from Alex Moreno, Real clearing the ball up-field to set up a lightning counter attack. Gareth Bale may have been frustrated when he was denied from point-blank range by Alberto Garcia, but he will have felt sick when the referee trotted over to the touchline to consult video replays of Guerra’s stretching dive for the ball.

The trend of Rayo dominance continued after the break as they valiantly attacked their prestigious neighbours, going for the jugular. Though they failed to add to their tally, they enjoyed a rather comfortable march to victory, Real struggling to break down their resolute defence.

The encounter showcased a disturbing lack of confidence within Los Blancos’ ranks, usually reliable performers such as Luka Modric and Toni Kroos ghosting throughout the contest. Despite the loss, they have qualified for the group stages of next year’s ?Champions League, though they are unlikely to catch second-placed ?Atletico Madrid, who sit nine points above them.

Here’s 90min’s breakdown of the match.

VAR, VAR everywhere! It is the debate that refuses to die down. The first-half penalty incident was very marginal, dividing viewers. The pull from Vallejo was slight, with Guerra appearing to make the most of the defenders’ actions. With such subjectivity in these decisions, can VAR ever satisfy the football public?

#bbceurofooty. La Liga VAR analysis is shocking. There is a need for improvement to avoid damage reputation to football standard.

Goal celebrations in ?La Liga are now somewhat reserved, the players seemingly too aware that their goal could be chalked off for a prior infringement. No one wants to end up looking foolish. What it comes down to is what we value most in football; accuracy from the officials or the freedom to release unrestrained passion.

Does any Madrid player truly deserve to be named as the star man? Courtois is one of a select few who did themselves justice at the 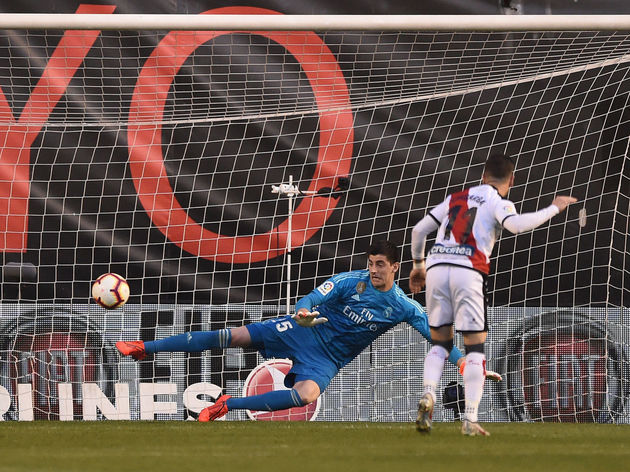 Embarda waited for the ex-?Chelsea shot-stopper to make his guess before stylishly passing his spot-kick in the opposite direction, Courtois completely blameless after a textbook finish. He dominated his area, patrolling it well as heavy traffic came his way.

It was unfortunate for the 26-year-old that only a handful of those in white could hold their heads high, Dani Ceballos one of the few others who looked sharp. He pulled off several flashy flicks to wow the crowd, whilst also driving forward with purpose and playing in runners, though his industry was ultimately fruitless.

Los Blancos welcome Villarreal to the Bernabeu next Sunday, before playing the penultimate game of their season away to Real Sociedad the following week.

Rayo travel to the