Bayern Munich forward Thomas Muller has tried getting under Real Madrid’s skin by claiming that the Champions League holders are “vulnerable” ahead of their semi-final clash this week.

Die Roten will host the Spanish giants at the Allianz on Wednesday in the hopes of finally getting past that particular hurdle. And the Bayern captain has said that his side will head into the match with loads of confidence. ?“We’re aware of Madrid’s qualities. We must attack them, must score goals and make use of the weaknesses Real have,” he said to reporters after Bayern beat Hannover on Saturday (H/T ?Kicker).

“They lost the second leg against Juventus 3-1, and that means that they are also vulnerable. We’ll go into this match with a lot of confidence.

“It’s a Champions League semifinal. If you play with fear, you stand no chance,” he said.

?? “The chances (against Real Madrid) look good. We’ve hit a purple patch and the game is coming at the right time. I’m sure we won’t be gifted anything, but there’s something in the air right now.”

“You must be convinced that you can beat Real, don’t take it too easy but, in a certain way, remain relaxed.

Bayern exited the competition last season after losing to Real, they were also booted by Los Blancos in both 2013 and 2014. Muller, though, insists the circumstances are different this time around. 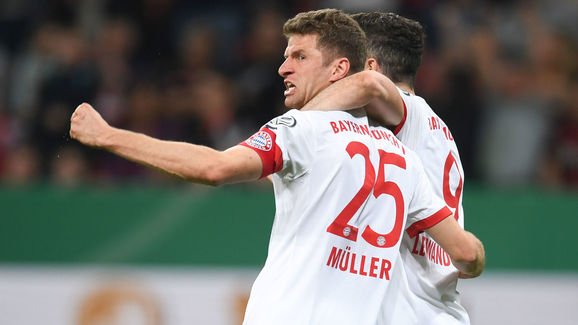 (You may also be interested in: ?Dani Carvajal Admits Concerns Over Bayern Munich Attacking Trio Ahead of Champions League Semi)

“It was just a different situation last year. I wasn’t fully fit, not at 100 percent, and trudged through it. We were unlucky to crash out,” he explained.

“It wasn’t Lewy [struggling with fitness]. We had many problems last year, especially in Madrid. We played with a team in which three, four players were at 50 percent. We still fought until the last minute. This year, we are all fit.”