Los Blancos have spent over six times more than their city rivals on their current squad, but the two teams will do battle on Saturday for European football’s ultimate prize

They could hardly be more different. This year’s two Champions League finalists are both from the same city, but there the similarities end. In terms of their fans, history, style, tradition and values, Real Madrid and Atletico are worlds apart. Yet the biggest different is financial.

Madrid traditionally spend big and have lavished speactacular sums on big-name signings in recent seasons, especially since the return of Florentino Perez as president in 2009. By comparison, Atleti’s approach has been much more austere.

In total, the combined cost of Madrid’s squad stands at €521.9 million and that includes the world’s two most expensive footballers: Gareth Bale and Cristiano Ronaldo.

The Welsh winger was signed from Tottenham last summer in a deal worth €100m, while the Portuguese arrived from Manchester United in 2009 at an outlay of €94m. For a sum significantly lower than either of those two fees, however, Atleti assembled a team to win La Liga and one which sits on the cusp of European greatness at the expense of their rival’s Decima dream.

Diego Simeone’s squad cost a grand total of €79.05m, with Arda Turan and Raul Garcia the most expensive signings in the group at €13m apiece, closely followed by Filipe Luis, bought from Deportivo La Coruna for €12m in 2010. Goalkeeper Thibaut Courtois remains on loan from Chelsea, while Diego Costa was purchased for under €2.5m, David Villa was somehow snapped up from Barcelona for a grand total of €5.1m, Diego Godin acquired for the bargain figure of €8m and many more arriving for free or for minimal fees.

“What’s the difference between Real Madrid and Atletico? About €400 million,” Simeone has said in the past. And although the Argentine is referring to the respective annual incomes of the two teams (Madrid €518m last year; Atleti €120m), he could have been talking about the sums spent by each side in the confection of the current squads – a difference of almost €443m.

It makes Atleti’s achievements all the more impressive. 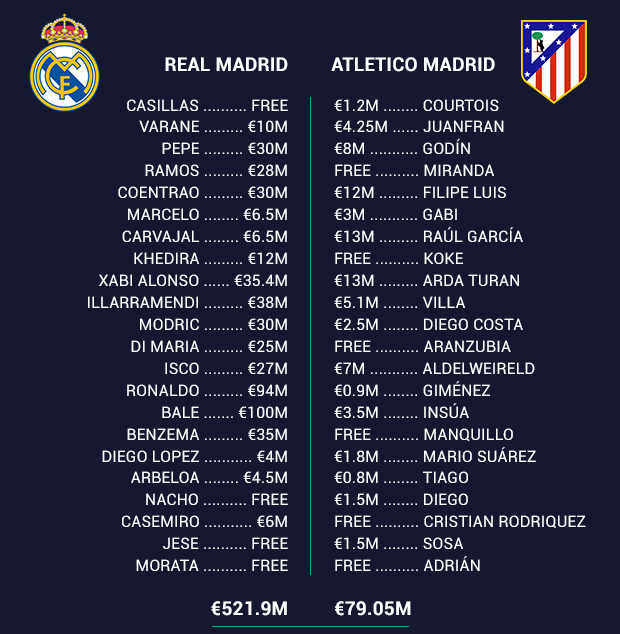