Saturday’s Champions League final is the culmination of a long and arduous season for Atletico Madrid, whose remarkable consistency has seen them beat Real Madrid and Barcelona to the Liga title and gatecrash Europe’s biggest competition.

Few at the Vicente Calderon would have been dreaming of a place in the showpiece at the beginning of the season, despite being drawn in a favourable group alongside Porto, Zenit St Petersburg and Austria Vienna.

Their campaign began in earnest at home against the Russian side, winning 3-1 thanks to goals from Miranda, Arda Turan and Leo Baptistao, despite Hulk drawing the visitors level temporarily.

Arda was on the scoresheet once more as they came from behind to triumph at the Dragao but there were no problems on matchday 3 as they won 3-0 at Austria Vienna before beating the same opponents 4-0 when they hosted them a fortnight later.

Their hopes of finishing the group stage with a 100 per cent were scuppered by a Toby Alderweireld own goal in a 1-1 draw at Zenit but they rounded off the first phase of the tournament with an impressive 16 points with a 2-0 victory over Porto. 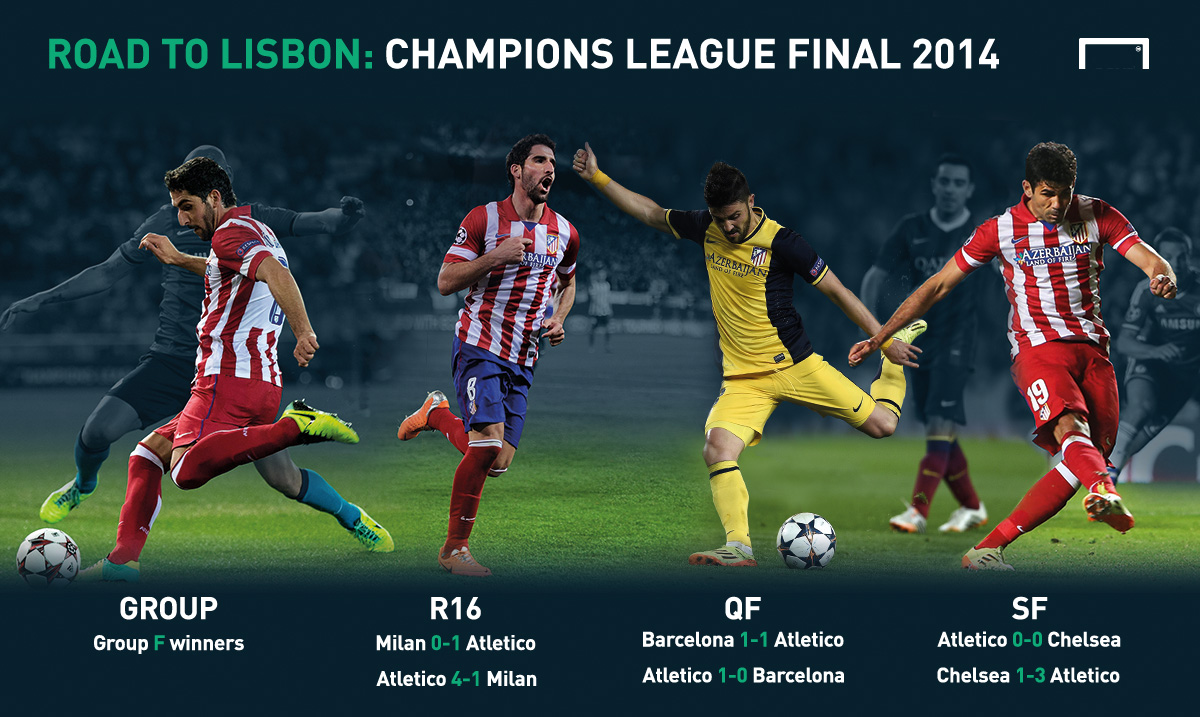 The round of 16 saw them drawn against AC Milan and, although the San Siro outfit had a number of favourable chances in the first leg, a late Diego Costa goal saw Atleti triumph before they thrashed Clarence Seedorf’s side 4-1 at the Calderon.

The quarter-finals saw them end Barcelona’s long run of consecutive last four berths. Neymar denied them a famous win at Camp Nou after Diego Ribas had given them a second-half lead but Koke gave them a 2-1 aggregate win with an early goal in the capital.

Then came the semi-final against Chelsea. Atleti dominated in the first leg but were unable to break down the stubborn west Londoners and it looked as though they could be crashing out when Fernando Torres gave Jose Mourinho’s side the lead in the return game.

However, Adrian, Diego Costa and Arda netted in a highly impressive 3-1 victory at Stamford Bridge and Atletico were preparing for their first European Cup final in 40 years.