COLUMN: Real Madrid against Atletico is the second successive same-country CL decider and indicative of how the biggest clubs in Europe have it all their own way

Unless you’re a follower of Real Madrid or Atletico there is unlikely to be a buzz for the final in whichever part of Europe you happen to be. That is not to say that it is not an intriguing encounter in its own right. It would, however, be more appropriate for it to take place in the final of the Copa del Rey.

Last year’s final in Wembley between Bayern Munich and Dortmund was similar in that respect. It would have made a decent DFB-Pokal final but it really was not for a Europe-wide audience.

Parochial battles, however, are now the norm in the latter stages of the Champions League. When Real and Atleti kick off in Lisbon it will be the fifth final to be contested by representatives of the same national association in the 17 seasons since the restructuring of the competition.

Real Madrid against Valencia was the first in 2000. That was followed in 2003 by the all-Italian affair between AC Milan and Juventus. Manchester United faced Chelsea in Moscow in 2008 before Bayern’s match against Dortmund last season. Very much the new reality.

Only four times since the restructuring for the 1997-98 edition of the Champions League have all four semi-finalists come from four different countries. Two of those occasions were in the first two seasons of the newly-formatted competition. There hasn’t been a semi-final comprising four teams from four separate countries since 2010.

On six occasions the semi-finalists have been drawn from only two countries. We have, so far, been spared the indignity of four competing teams from the same country in the semi-finals, but the Italians, the Spanish and the English have been pretty close. 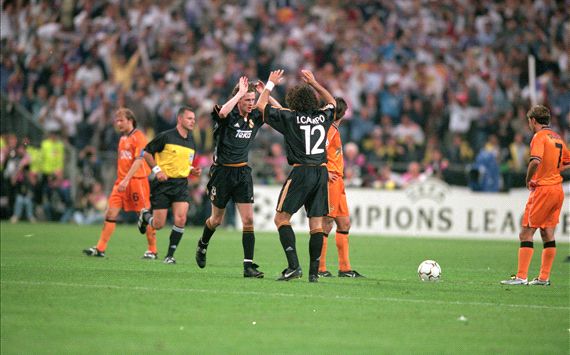 In that respect the finalists for this season’s competition were never going to surprise anyone. They were always going to be the better teams from the bigger leagues from within the first two pots. Uefa has effectively tweaked the draw to ensure this remains the case. Atletico might be the ‘feel-good’ story of the competition but the fact they could avoid Real and Barcelona until the quarter-finals held them in good stead.

Uefa has extinguished the thrilling diversity of European football; the Champions League has been reduced to a random derby generator. This, however, is how Uefa likes it and the clubs too. But why?

Real Madrid and Napoli were drawn in the first round against each other in 1987 meaning that the European Cup would lose the representative team from one of the richest television territories. More was done to safeguard the participation and progress of European elite sides and keep the money rolling in. The Champions League was born. It was expanded in line with clubs’ wishes in 1997 when Uefa recognised the threat posed by the mooted Media Partners super league. Using the Italian company’s interest in a breakaway as leverage, the biggest clubs in Europe initiated an expanded tournament.

It’s an evolving, ongoing process of appeasement that is likely to create a new conversation when the memorandum of understanding between Uefa and the ECA – the European Club Association – comes to an end in 2018. Plans are clearly already afoot behind the curtain to kick off a Super League although the ECA would not care to admit it.

“I have heard about a project they have already in some kind of box,” Milan coach Clarence Seedorf has told the BBC. “I believe in a European League. I would like to see more quality in the game and fewer games mean more quality.”

If Michel Platini and Uefa don’t play ball with the clubs which command the attention, they are at risk of losing them altogether. That, in turn, means making the draw as predictable as possible.

With Financial Fair Play now beginning to bite, there is an uneasy truce. Uefa permits anything and everything to favour the major clubs in the Champions League, but off the field matters could become difficult between the governing body and its members.

There are complaints about how Spanish TV money has recently been a carve-up between Real Madrid and Barcelona. Uefa, through the Champions League, is no different in the way it looks after its cash cows.

Despite that, the threat of a mass exodus hangs over Uefa and its flagship competition. It is nothing without the clubs and, so, they are effectively free to run the Champions League themselves like a cartel.

“I feel inside our game there are some voices behind the scenes coming up to do something if the rules become too restrictive for these clubs,” Arsene Wenger said in 2009.

“The way we are going financially is that even the money that will be coming in from the Champions League will not be enough for some clubs because they spend too much money.”

Already representatives from Juventus, Milan, Barcelona, Galatasaray and more have confirmed that they would be interested in a breakaway venture.

Uefa’s current operation involving funneling the biggest clubs from England, Spain and Germany as far as possible in the Champions League without significant opposition has discredited a once-majestic tournament, but it is keeping the giants satiated.

And if the clubs under the ECA umbrella do decide to walk away in 2018 to establish their own league, without anything approaching financial controls, then Uefa will have to ask itself if it was all worthwhile.