Carlo Ancelotti’s side have been poor against the big teams so far this season, but were rewarded for their positive football in a bad-tempered clash with city rivals Atletico

It was quite a statement. Up until now, Carlo Ancelotti’s Real Madrid had failed to convince in all of their games against the big teams this season, losing to both Barcelona and Atletico, while winning with some fortune against a poor Juventus side who were down to 10 men. But Wednesday night changed all that.

Having gone 14 years without defeat against Atletico, Madrid lost to their city rivals in the final of the Copa del Rey last May at, of all places, the Santiago Bernabeu. And Carlo Ancelotti’s men were then edged out by Diego Simeone’s side again in La Liga back in September. Suddenly, the capital divide had been slammed shut by the men in red and white.

But it reopened on Wednesday. Real were pumped for this one, keen to regain the bragging rights they had held for so long in this derby date, eager to improve a dismal record so far this term against the top teams and, in the process, take a giant step towards a first trophy under their Italian coach in the first leg of this Copa del Rey semi-final.

And they did all of that. It wasn’t pretty, not at all, but it invariably isn’t when Atletico are involved. This match was reminiscent of the bad-tempered final back in May and bygone Clasico clashes between Barca and Madrid. There was no love lost. 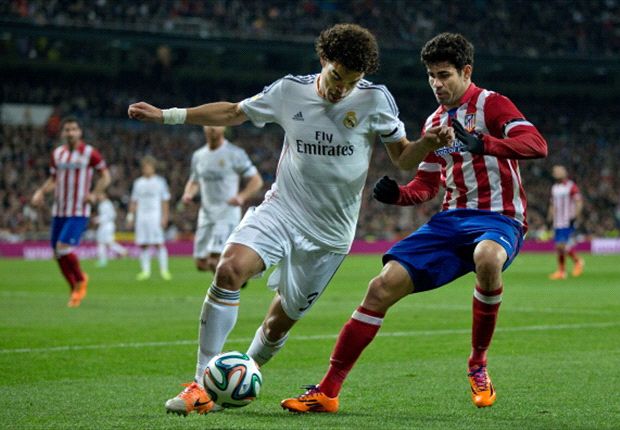 Diego Costa, as usual, was playing on the edge, while Pepe and Alvaro Arbeloa also diced with dismissals in a game of provocation, play-acting, spitting, stamping and downright debauchery. Both teams could have had a penalty, with Costa fouled by Arbeloa and the Madrid defender later pushed to the ground by Joao Miranda. But only one side really played football – and that was Real.

Madrid went in front with a Pepe strike which deflected in off Emiliano Insua. There was a large element of luck involved, but in this case, fortune favoured the brave and by half-time, the lead looked more than fair. Atletico had barely been in it.

Simeone will have been fairly content with the narrow deficit at the break, but his side desperately needed to improve in the second period. And they did, at least initially, but they were soon struck by a damaging double blow: first, Jese fired Madrid two ahead following a wonderful pass by Angel Di Maria; then, Diego Costa was booked in what appeared his least severe intervention of the evening as he exaggerated a foul by the Argentine winger. Pepe laughed in his face.

With Costa now suspended for the second match and David Villa a big doubt after his injury at the weekend, Atletico definitely needed something now, but another deflected strike, this time hit by Di Maria and in off Miranda, compounded an already awful night for the Rojiblancos, who moments earlier had seen Luka Modric make a crucial goal-line clearance to deny Diego Godin’s header.

“I don’t believe we defended badly,” Simeone said afterwards. “There were two long-range goals that were deflected. They were not our errors.”

Perhaps not. But in the end, Atletico paid the price for their negativity and fortune favoured the team that went out to win the game. And that was Real Madrid.

“It was our best game,” Ancelotti enthused. “Especially because the opponents are a good and very well-organised team. The desire would be for us to always play like we did tonight.”

Against a team who have conceded only once in 2014, Atletico now need a minor miracle. Madrid, meanwhile, made a statement against one of the best sides around. The final beckons.