The Fifa award is in danger of becoming a divisive popularity contest which undermines the fundamental values of the game, but there is another way…

Arsene Wenger revealed an uncomfortable truth about the Ballon d’Or when he denounced the cult of the individual eroding the game’s cherished team ethic.

“I am against individual awards,” said Wenger last month. “This is an endorsement of an individual which goes against the essence of our sport.

“I fight like mad against the Ballon d’Or, which hurts football. Unconsciously, the player is prompted to favour individual performance over that of the team.”

The nominations for this year’s award are a manifestation of the Arsenal manager’s concern and the presidential-style campaign tacitly endorsed by each of the shortlisted candidates is a disturbing sign for the future.

But it doesn’t have to be this way. Fifa could find a method of rewarding individuals who are the embodiment of outstanding team play and thereby enhancing the “essence of the sport” instead of persisting with a Eurovision-style popularity contest.

It is a tough task to choose three individuals who illuminated the calendar year more than all others but, as we shall see below, there are more deserving candidates than the trio being lauded in Switzerland on January 13.

The selection criteria are simple and based along Wenger’s edict that team play is the fundamental value which underpins the world’s most popular sport.

Yet this is an individual award so there must also be room for players whose contributions helped elevate their team to achievements beyond expectation. Posterity is the final factor. What will the 2013 football year be remembered for?

This is an alternative Ballon D’Or shortlist. Tell us your views on social media or in the comments section below. 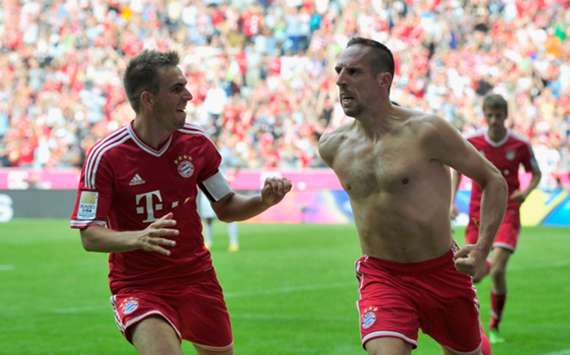 There is no argument that Bayern Munich were the outstanding team of 2013. Every trophy – bar the DFL-Supercup – that could have been won was captured and they are in a strong position for another clean sweep in 2014.

But, when the details of last year’s achievements are analysed, it is clear that the success was ultimately built on rock-solid defensive foundations.

Only three goals were conceded in the entire Champions League knockout stage. The German champions have allowed only eight goals in the Bundesliga this season and only 11 in the second half of last season, five coming in a meaningless games after the title had been secured in early April. So, in Bundesliga games that mattered, it is 13 goals conceded in an entire calendar year.

They can score too – as demonstrated by 42 goals in 16 Bundesliga matches this season and the 7-0 aggregate beating of Barcelona in the Champions League semi-final – but it is the defensive record that is truly astonishing when compared to other great champions of the past.

Clearly with the Ballon d’Or, an entire defensive unit – including goalkeeper and midfield players – cannot be recognised.

So the logical step is to reward an individual who is the embodiment of that defence. In terms of consistency of excellence, Bayern captain Philipp Lahm is the standout.

While Franck Ribery deserves the same accolade as the leader of a fearsome attacking unit which so meritocratically spreads goals among the forward players, the choice for Bayern figurehead ultimately comes down to defence versus attack.

The halfway house candidate is Bastian Schweinsteiger, who played a key role in both. However, posterity and the statistics will judge this Bayern defence as one of the greatest ever – the same cannot yet be said of the attack – so the Ballon d’Or nod should go to Lahm. 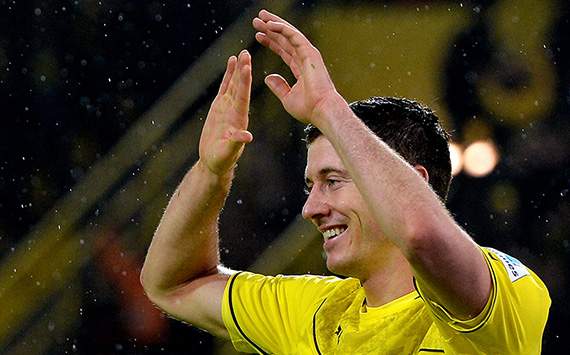 Predictability ruled in 2013. The powerhouse clubs expected to win their domestic leagues generally did. And while Bayern Munich were not pre-tournament favourites for the Champions League, it was no great surprise that they triumphed at Wembley.

The one major turn-up, the team who defied the odds, was Borussia Dortmund. For only the second time in Champions League history, a club seeded from Pot Four made the final. They did it the hard way too and en route produced the most stunning result of the season by beating Real Madrid 4-1 in the first leg of their semi-final.

That game also witnessed the outstanding individual contribution of the season – all four goals coming from Robert Lewandowski. When students of football look back at the 2013 records, that is the 2013 achievement that will resonate.

Four goals from one player in a single Champions League game is rare but four goals in a semi-final against the world’s most illustrious and expensive team? It is a feat which may never be surpassed.

Of course, one swallow does not make a summer. Lionel Messi produced many wonderful individual displays and almost single handedly turned round a losing position against AC Milan. But, over the course of the calendar year, Lewandowski’s statistics stack up to Messi’s.

The Polish striker scored 36 goals for BVB in all competitions, Messi struck 39 times in 2013 for Barcelona. Of course, the difference would be higher but for the Argentine’s injury problems, but that is missing the key point.

It is about respective levels of support and expectation. Barcelona with Messi are expected to win La Liga and at least reach the final of the Champions League. Their team on its day is arguably the greatest attacking force in the history of the game. And their creativity is all centred around supplying Messi.

So Messi did his job in 2013, he delivered the goals to justify his status as the fulcrum of this formidable unit. But no more than that.

The bar has now been raised so high by Barcelona that failure to secure more team success must count against their talisman.

Dortmund, on the other hand, exceeded expectations. Finishing second in the Bundesliga is where they should be on account of their budget compared to Bayern’s but, by the same measurement, they should not be securing a place in the final ahead of clubs like Real Madrid, Barca, Manchester United, Paris Saint-Germain and Chelsea.

Lewandowski finished second top scorer in the both the Champions League and the Bundesliga. He also leads the German domestic charts this season – even though Mario Gotze has been sold and his club are experiencing a horrific injury crisis.

What has been just as impressive is his attitude. He is quitting Dortmund for Bayern in the summer but, while so many team-mates have fallen by the wayside, Lewandowski has kept battling for points in a struggling side.

Would other players have been more concerned about protecting their big move and not risking injury? Quite possibly, but not Lewandowski.

Again, if our criteria for a candidate is an outstanding individual representing a team which has surpassed expectations, Lewandowski must be on the list. 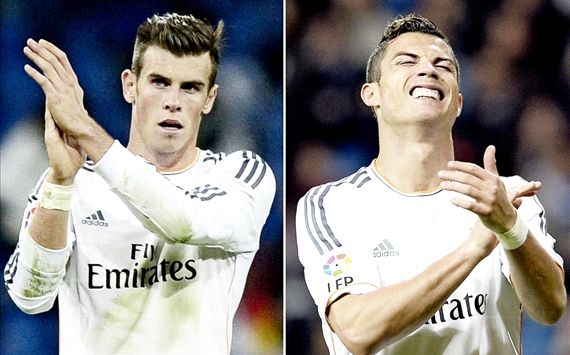 The hardest choice. It is beyond question that Cristiano Ronaldo has the best individual statistics of 2013. But to what end? Real Madrid didn’t compete for La Liga’s title, they were humiliated in the Copa del Rey final and humbled by Borussia Dortmund – a team assembled at a fraction of the cost – in the Champions League semi-final.

Ronaldo delivered in many matches but not so much when the chips were down. Let’s also not forget the inherent advantages Real Madrid enjoyed last season. They boasted the most expensively assembled squad in the world, the game’s best-paid coach and the then-costliest player on the planet. The expectation was silverware. The outcome was just a Supercopa de Espana.

Ronaldo scored goals for fun in a team built to serve him, which even included a non-scoring centre-forward because his game was so suited to the Portuguese’s play. They put all their eggs in one basket in a strategic move which played into the hands of Barcelona, Dortmund and Atletico Madrid.

Ronaldo is now the game’s best-paid player and deserved the rise for his contribution. But did he exceed expectations in 2013 and did his contribution to the team help raise Real Madrid to another level?

The answer probably lies in the signing of Gareth Bale. If Ronaldo dependency was working in 2012-13, then why spend €100 million on a player in the same position? However Madrid want to paint it, the signing of Bale was a slap in the face for the Ronaldo method as choreographed by Jose Mourinho.

And what of Bale? The Welshman did not lift his team to another level either. Tottenham failed to reach the Champions League places and did not win any silverware. They finished fifth in the Premier League which is pretty much in line with expectations.

Without Bale, however, Spurs would almost certainly have been lower as the fallout this season to his sale has demonstrated.

Bale scored 15 goals for Spurs in all competitions from the turn of the year and comfortably won both the Premier League’s two main Player of the Season awards. Remember this was also the season that saw Robin van Persie’s arrival turn Manchester United into champions and Juan Mata take the Premier League by storm.

An intangible aspect comes into play here too. A run of seven goals in five consecutive scoring games – as Bale achieved between January and March – can happen in the Premier League but generally only to a recognised striker. Are such sequences harder to achieve in England because is it more competitive than other top European leagues? Well, that is a bigger argument but probably has some validity.

Some will say Bale shouldn’t be considered for the Ballon d’Or because he was not tested in the Champions League. Yet he had no opportunity with Spurs and has already started to address that with Madrid, scoring twice in three appearances, including against Juventus.

He can only beat what is put in front of him. The fact that he made such an impact playing half the year for a less fashionable club should count in his favour in terms of individual achievement.

Bale wanted to play at the top level and used his phenomenal season at Spurs as a springboard to greater things.

While injury blighted his start at the Bernabeu, his record reads seven goals from 10 matches, plus a host of assists.

He also became only the second British player (after Alan Shearer) since 1951 to be deemed worthy of the world’s largest transfer fee.

It all happened in 2013 for Bale – a sensational breakthrough year for the Welsh winger and he deserves recognition for it.