Graziano Pelle has been in sublime form for Feyenoord since his return to the Eredivisie, but gets little recognition outside Netherlands

When Feyenoord announced the capture of Graziano Pelle on a one-year loan deal in the summer of 2012, the transfer was met with scepticism by fans and pundits alike. The Rotterdammers had only just bid farewell to the hugely popular John Guidetti and were in desperate need of goals if they were to have a realistic shot at the 2012-13 Eredivisie title. General consensus was that the Parma attacker was not the right man to emulate the young Swede.

Pelle had reached double figures just once before his move to De Kuip – and even that was while plying his trade in Serie B at Cesena in 2006-07. A previous spell in the Eredivisie at AZ, which saw him score a meagre 14 goals in 78 league appearances, only further increased doubts about the striker’s credentials.

However, head coach Ronald Koeman – who had previously worked with Pelle at AZ – had faith in the former Italy Under-21 star and bravely predicted that the striker would score at least 15 times that term.

The Italian quickly proved Koeman right. He opened his Feyenoord account in only his third game and had already reached 14 Eredivisie goals at the halfway point of the season.

Feyenoord were convinced enough by then and happily spent an estimated €2.5 million to sign Pelle on a permanent basis, regardless of their troublesome financial position. The charismatic forward has since rewarded the Eredivisie giants for the faith shown in him with a string of impressive displays and some breathtaking goals.

Pelle ended last season with 27 goals from 29 appearances and his stunning form has continued this term. The 28-year-old has found the net 14 times in 17 games, with this weekend’s 5-2 win over Utrecht further proof that he’s no longer the laughing stock some in Italy once painted him as. The former Parma man not only scored a brilliant backheel, but also created several chances for his team-mates and caused the Utrecht defence all kinds of problems in what was quite possibly the best game of his career.

Yet despite his fine performances and sublime goalscoring record, Pelle gets little recognition in his native country. Italy have had their fair share of attacking problems since Euro 2012, with Mario Balotelli the only striker seemingly guaranteed a spot in the Azzurri‘s World Cup squad, but Cesare Prandelli has yet to turn to the Feyenoord attacker. Whereas lesser players such as Marco Sau and Manolo Gabbiadini have already had the chance to prove themselves under Prandelli, Pelle continues to be ignored.

With Giuseppe Rossi a doubt for the World Cup due to injury and other first striker options such as Pablo Osvaldo, Alberto Gilardino and Giampaolo Pazzini all struggling for form, Prandelli would be wise to give the Eredivisie star a chance in one of the upcoming international friendlies.

While some critics may point to the recent fine showings of Ciro Immobile and Domenico Berardi, neither has been delivering the goods for 18 months as Pelle has.

Frustratingly, the fact that the striker is playing outside one of Europe’s top five leagues will not boost his chances of an Italy call-up. Although a number of Europe’s top sides are looking to add some fresh blood to their attack this month, the Feyenoord man’s name rarely is mentioned in the daily rumour mill.

Pelle recently revealed in his book that he was on the verge of joining Real Madrid in the summer of 2005 after impressing at the U-20 World Cup – where he outscored the likes of Radamel Falcao and Sergio Aguero – until Lecce pulled the plug on the deal, but a move to one of Europe’s finest has not been close for the striker since.

The lack of interest in Pelle can be easily explained by reviewing his stats before he joined Feyenoord, but there’s no denying that the striker has made huge steps forward since his return to the Eredivisie. 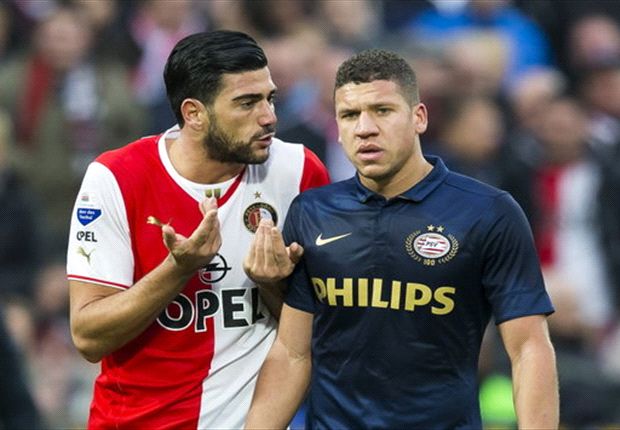 Once an indecisive and clumsy forward who mainly caught the attention for his unimpressive workrate and poor movement, Pelle is now developing into the striker he promised to become at the 2005 Youth World Cup.

That’s not to say that Pelle is among the best strikers in the world, but it is peculiar to see a club like Fiorentina turn to Alessandro Matri earlier this month – an attacker who netted just six Serie A goals in all of 2013 – while ignoring the most prolific Italian in Europe. Inter are searcing for a striker in January, but instead attempted to sign Mirko Vucinic, who turns 31 this year. Arsenal and Tottenham both need frontmen, too. Top clubs all over Europe are overlooking Pelle.

The Feyenoord man remains unperturbed, though, that Europe’s biggest sides continue to snub him.

“It’s always an honour when other clubs are interested in signing you and perhaps I deserve it with my performances. I am not thinking about a transfer, though. I am feeling very well at Feyenoord and I love this club,” Pelle stated this week.

Despite the striker’s claims that he’s happy to stay at Feyenoord, a transfer seems inevitable at the end of the season if he continues his current form. The Rotterdam giants can only hope five more months of Pelle’s brilliance will be enough for a major trophy, before the Italian at last gets his shot at success at the highest level.