As part of Goal’s build-up to the announcement of 2013’s top player, we reveal our best line-up consisting of past winners of the individual award

After months of speculation, voting, nominations, controversy and discussion, we are finally set to learn who will be crowned the 2013 winner of the Fifa Ballon d’Or award.

Ahead of the gala, Goal have produced our XI highlighting the best previous winners of the game’s most prestigious individual award. 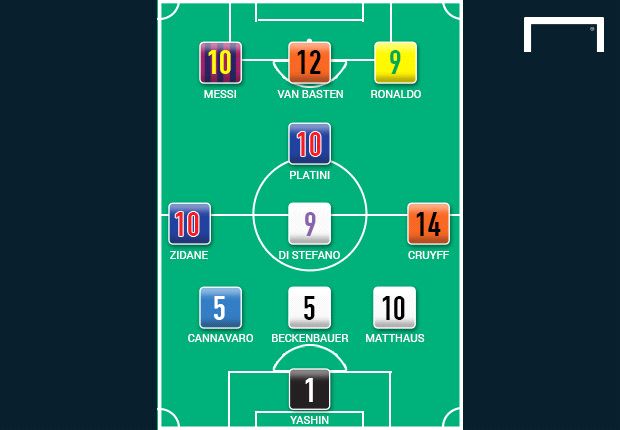 In goal we line-up with Lev Yashin, whose 1963 Ballon d’Or success remains the only time a goalkeeper has triumphed. The shot-stopper was a Dynamo Moscow legend and reached two consecutive European Championship finals in 1960 and 1964 with the Soviet Union, winning one.

In defence, Fabio Cannavaro gains selection. His 2006 award, picked up after he guided Italy to the World Cup, was the last time a defender won and rewarded a career that saw him win multiple league titles with Juventus and Real Madrid.

He is joined by German legends Franz Beckenbauer and Lothar Matthaus. Beckenbauer was Ballon d’Or winner twice in 1972 and 1976. He played over 100 times for West Germany, winning the World Cup and Euros as well as leading Bayern Munich to four league titles and three European Cups. Matthaus, played in midfield as well as at the back, won a record 150 caps for the German national team, captaining them to World Cup glory in 1990, leading to him winning that year’s Ballon d’Or. He won seven leagues with Bayern as well as Serie A with Inter, where he was playing when recognised with the award.

In midfield, Zinedine Zidane (1998) gains selection. Picking up the award in the year France won the World Cup, the best player of his generation was also a World Cup finalist in 2006, when he was infamously sent off, and a tournament winner with les Bleus at Euro 2000. At club level Zidane won back-to-back leagues with Juventus, another title with Real Madrid in Spain as well as the Champions League in 2002, where he scored a stunning goal in the final at Hampden. Johan Cruyff – a three-time winner (1971, 1973, and 1974) – is also picked. His first Ballon d’Or came while he was at Ajax, where the Netherlands legend won eight league titles and three Champions Leagues. The latter two came after his famous move to Barcelona. Cruyff was Dutch Footballer of the Year five times.

Alfredo Di Stefano is the iconic representative of the Real Madrid team which won the first five European Cups in consecutive years. He won the Ballon d’Or in two of those years (1957 and 1959) and went on to rack up eight league titles at the Bernabeu. Michel Platini was Ballon d’Or winner for three straight years (1983, 1984, and 1985) – which was a record until it was recently beaten by another member of our selection. The attacking midfielder was European champion at club (with Juventus) and international level during his period of individual dominance. He scored an incredible nine goals at Euro 1984, including two hat-tricks.

Further forward, Brazilian legend Ronaldo is part of our attacking unit. He won the award twice (in 1997 and 2002). He won two World Cups and was a losing finalist in another, netting 62 goals for Brazil. Despite his incredible goalscoring record, his Ballon d’Or recognition and playing for superpowers Barcelona, Inter and Real Madrid, the Champions League was a trophy which eluded him.

Marco van Basten was a three-time Ballon d’Or winner, winning in 1988, 1989 and 1992. He triumphed in the European Championship with the Netherlands in ’88, scoring the famous volleyed goal against the Soviet Union in the final on the way to being named player of the tournament. Van Basten also won back-to-back European Cups with Milan.

Our final selection is Barcelona star Lionel Messi. The Argentine has already won four successive Ballon d’Or titles in the lead up to this year’s ceremony and is unlikely to be finished yet at the age of just 26. With six Liga titles, three Champions League crowns and over 300 club goals already to his name, the forward will be hoping to complete his medal collection with the World Cup in 2014.