With Madrid in fine scoring form away from home, Phil Kitromilides believes they should be backed to net over 2.5 goals on Sunday evening

Real Madrid head to Cornella El Prat in search of three vital points as they look to take full advantage of the fact that Barcelona and Atletico Madrid meet 24 hours earlier.

Somebody will have dropped points by the time Madrid face Espanyol and Carlo Ancelotti’s men know just how imperative it is that they do not slip up.

Espanyol meanwhile are fast becoming one of the toughest sides to predict in the league having beaten Atletico, Valencia and Athletic Bilbao at home, yet also succumbing to defeats against Getafe and Sevilla (Sevilla’s win at Cornella was their first on the road in over a year). 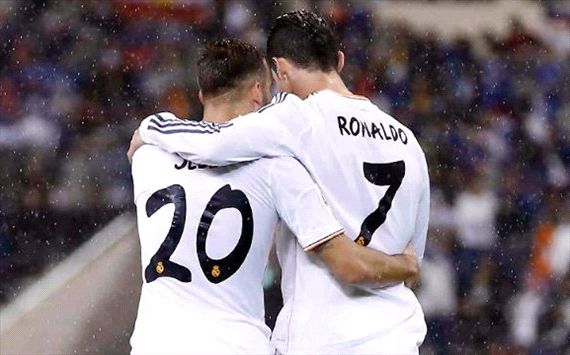 On the road the Whites having bee in solid scoring form, netting at least twice is seven of their last eight matches. Unsurprisingly they are offered at just 3/10 (1.30) to score over 1.5 goals but the price of 10/11 (1.91) for them to score at least three is worthy of some consideration.

This bet has paid out in six of their last seven league games that Madrid have contested with Carlo Ancelotti’s men always a threat in front of goal.

Cristiano Ronaldo continues to be rampant, while Karim Benzema and Gareth Bale have both been chipping in with goals and Jese Rodriguez is starting to shine as well.

In short, goals can come from anywhere in this Madrid side, and against an Espanyol side that has kept only one clean sheet in seven league games, the Whites should be backed to score at least three times.