It was as you were in matchday two of this competition, with Atletico Madrid impressing again, while Greenpeace protestors left Uefa with an awkward moment

COMMENT
By Peter StauntonJuventus’ ineptitude strikes again, another Real Madrid forward fires a shot across the bows of Gareth Bale and Atletico Madrid rumble on. Some things haven’t changed from matchday one in the Champions League.

Galatasaray ensure that the Italian champions must now take at least four points from a relentless Real Madrid, who could count on Angel Di Maria to deliver a match-winning performance against Copenhagen. Meanwhile, slick neighbours Atletico remain perfect in their group following a well-planned 2-1 win over Porto.

Arsenal lead the English charge after their hugely impressive win, courtesy of the brilliant Mesut Ozil, against Napoli guaranteed six points from six. Chelsea are back on track after winning at a Steaua Bucharest side sorely lacking Vlad Chiriches. Manchester City’s humbling at the hands of Bayern was one for the ages while United did well to hold Shakhtar, ultimately, to a draw.

There was no shortage of controversy either. Mario Balotelli’s rescue act for Milan was prompted by the dubious award of a last-minute penalty against Ajax and Zenit were furious to see Axel Witsel sent off for a seemingly legitimate challenge in the damaging 0-0 draw with Austria Vienna.

Here are this week’s talking points: 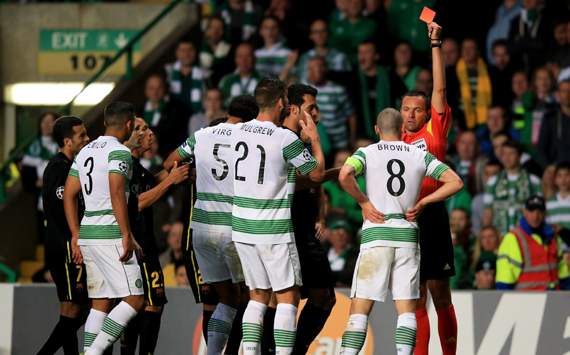 Why should Neymar have to put up with criticism from the Celtic manager, Neil Lennon, and his Scotland counterpart Gordon Strachan after being attacked by Scott Brown on Tuesday night? Lennon told the press in the wake of Barcelona’s 1-0 win at Parkhead that the game turned on Brown’s red card and referred to Neymar’s reputation as a diver as the main reason behind it.

Well, there is one simple way to put a stop to all such conjecture; don’t kick Neymar in the back. Scott Brown stupidly abdicated his captain’s duties, nudging the Brazilian with his foot like a brat, leaving his side to play for half an hour against one of the best teams in the world. What ensued, inevitably, was a Barcelona victory.

This season in the Champions League Brown had already stamped on a Shakhter Karagandy player and elbowed Mario Balotelli off the ball in the defeat to Milan, instigating a goal. Why is Celtic’s captain behaving so thuggishly, seemingly intent on inflicting damage to his own team? And why is his manager excusing his behaviour, passing the blame to the victim?

Even Brown’s apology for the Barcelona dismissal was couched in the language of a man failing to grasp the consequence of his actions. In between “I made a mistake” and “I put my team-mates in a difficult position” were phrases like “in the heat of the moment”, “I think it was a harsh decision” and “there wasn’t a huge amount of contact.”

Things are hard enough for Celtic in a group containing Barcelona, Milan and Ajax. They do not need the indiscipline of Brown compromising their chances any further. His suspension should be welcomed by the players he can no longer endanger, on both sides. 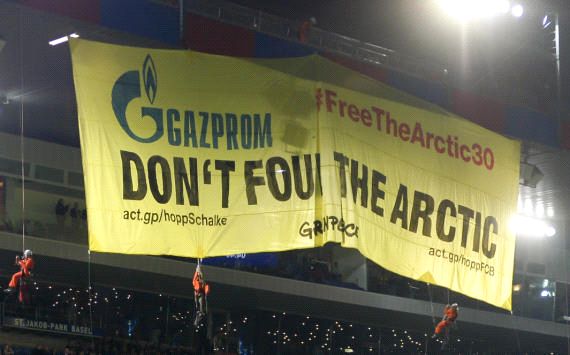 On September 18, Greenpeace activists scaled Gazprom’s Prirazlomnaya platform in protest against oil drilling in the Arctic.

An AP investigation concluded that at least 5 million tonnes of Russian oil is lost to spillage every year. Greenpeace and the World Wildlife Fund published a report last month which warned of potential environmental catastrophe in the region in the event of a spill.

In response to the scaling of the platform the Russian coastguard seized the Arctic Sunrise ship and towed it to the Murmansk, around 1000 kilometres away, and placed 30 protesters on board under arrest. Russian authorities plan to charge the Greenpeace activists with piracy which carries a maximum sentence of 15 years in prison.

There has been worldwide outrage over the detentions and the issue reached the world of football in dramatic circumstances on Tuesday. During the Basel – Schalke match at St Jakob Park, abseilers unveiled a banner carrying the slogan DON’T FOUL THE ARCTIC and calling for the immediate release of the 30 activists.

It also, crucially, mentioned by name Gazprom, which is an official Champions League sponsor having signed a deal with Uefa in 2012 for a duration of three seasons. The sums involved were not disclosed but, given the company’s 2012 revenue was $152 billion, it was not insignificant. Gazprom, while owning Zenit St Petersburg, also sponsors Schalke as well as Red Star Belgrade and Chelsea. It has become a major player in European football.

With Fifa’s relationship with the state of Qatar currently under the spotlight and drawing heavy criticism the focus now comes onto Michel Platini’s organisation. Not that you would know it. This week no official Uefa highlights package or match report carried news of the protest in Switzerland. Blackout.

But those inside the stadium and watching on television know what they saw. It was a moment of acute embarrassment for Uefa and Gazprom and placed under scrutiny the organisation’s relationship with an entity seen as unethical and dangerous. 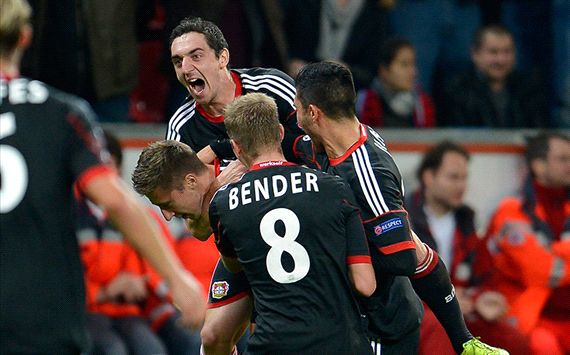 Representative teams from the Bundesliga can kick back, relax and enjoy a well-deserved day off on German Unity Day today. For the first time in history four competing clubs from Germany won on the same matchday in the Champions League.

Borussia Dortmund were back in the groove on Tuesday night with Marco Reus and Robert Lewandowski looking sharp. Schalke, again thanks to their precocious and brilliant playmaker Julian Draxler, achieved victory over a hard-working Basel while on Wednesday Jens Hegeler’s stupendous last-minute free-kick earned Bayer Leverkusen the three points at the expense of Real Sociedad.

At the vanguard, as usual, were Bayern Munich. If you caught minutes 80-90 without looking at the scoreboard you might have thought City were in with a chance. Bayern, down to 10 men with young substitutes on, tired as their relentless 80-minute press took its toll. What preceded that was the finest spell of football played in Europe this season. It was close to perfection.

Happily for the competitiveness of the Bundesliga, Bayern are not, yet, top of the league. That honour goes to Dortmund while Leverkusen are not far behind. With Milan and Juventus drawing and Napoli losing there is only one direction this co-efficient battle is going.

German football is in rude health. 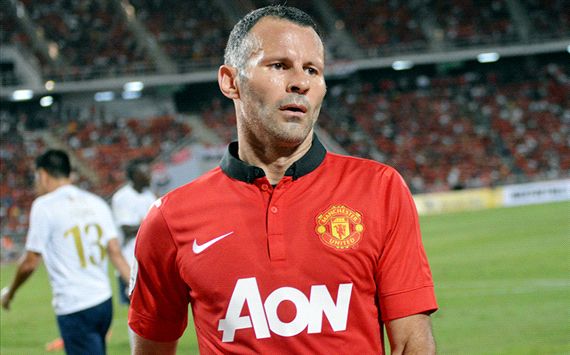 “A great source of pride,” is how Ryan Giggs described becoming the player with the most appearances in the Champions League. He took his total to 145 in Manchester United’s 1-1 draw away at Shakhtar Donetsk. In the match against the Ukrainians he edged past Raul in the all-time ranking.

Well, Giggsy, it has been a great source of happiness watching you play football for the past 23 years. Robson, Cantona, Keane, Beckham, Scholes and Sir Alex Ferguson himself have been and gone since Giggs made his debut and now alone he stands as a last link to United’s glorious heritage.

Here is a player who remains in prime physical condition a month short of his 40th birthday and who has been a model of consistency and professionalism throughout his distinguished career. Despite stacking up the honours year after year his appetite remains undiminished and his willingness to teach younger players shines brightly.

The Welshman is living football history and his presence should be cherished where ever he plays between now and his retirement. He’s played close to 950 club matches in United’s colours. Here’s to 1,000. 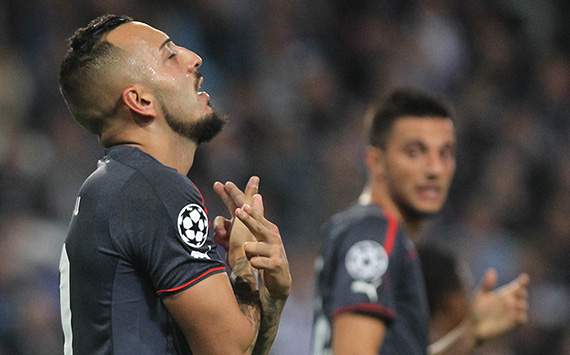 PSG’s destruction of Benfica, inspired by the brilliant Zlatan Ibrahimovic, moved the French champions to six points and seemingly out of sight with two games against Anderlecht to come but it will also have been hailed in Piraeus by Olympiacos.

The Greek champions were comprehensively outplayed by the Parisians on matchday one but put themselves in with a fighting chance of progress with a 3-0 smash-and-grab win over the Belgians away from home.

The main source of their win was Kostas Mitroglou, the Greece international forward. He scored a hat-trick on the night, the pick of which was his third goal. Late in the game, he caressed the top of the ball with the underside of his left-foot and drove expertly a shot into the top corner with his right. It was the goal of a man in form.

Amazingly, it was Mitrogolou’s third hat-trick of the season for Olympiacos having already rattled in two for the Super League leaders against Levadiakos and Xanthi.

Deprived of the talents of Djamel Abdoun this season, Olympiacos will look to Mitroglou as well as impressive new pair Vladimir Weiss and Javier Saviola for Champions League progression.

The games against Benfica are now vital.