The 44-year-old stepped down from his post at Camp Nou in order to continue further cancer treatment, prompting messages of support from across the world on social media

Lionel Messi, Chelsea and Real Madrid are among the thousands to have issued messages of support to Tito Vilanova, after it was confirmed the 44-year-old has resigned as Barcelona coach due to ill health.

Barca president Sandro Rosell confirmed the news at a press conference on Friday evening, revealing that Vilanova was due to undergo further treatment to his throat cancer which would make it “impossible for him to continue as coach.”

Former Barca stars Eric Abidal and David Villa also sent their best wishes via personal Twitter accounts, while Vilanova’s son retweeted the message: “Tito is not retiring. He will just concentrate on the most important game of his life.”

@Guaje7Villa
A big hug for Tito and all his family. I wish you lots of strength to keep fighting in this very difficult moment. 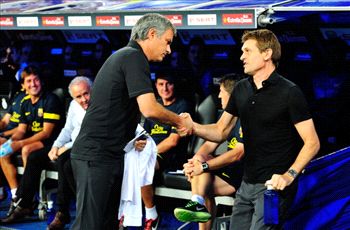 Everyone at Chelsea Football Club sends their best wishes to Tito Vilanova for a speedy recovery.

Jose Mourinho, his coaching staff and the Chelsea players also all send their best wishes to Tito Vilanova for his fast recovery.

@realmadriden
We would like to send our support, affection, and solidarity to Tito Vilanova, his family, friends, and FC Barcelona. #GetWellSoonTito

@GaryLineker
Very sad that FC Barcelona coach, Tito Vilanova has resigned due to his medical condition. Wish him all the very best.

@gerardeulofeu
“Strength, Tito! We are with you!” 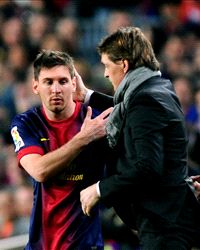 @Thi_Alcantara91
All the support in the world for Tito and his family. We are all with you! #ànimsTito

@juanmata10
All my support for Tito and his family, we are with you #getwellsoonTito #AnimsTito

Lionel Messi (via Facebook):
Strength, Tito! We are all with you in this fight

@_AlvaroNegredo_
All the strength and luck to #TitoVilanova. I wish you a quick recuperation.

@ PReina25
Football is fleeting with its triumphs and troubles. All my strength to Tito Vilanova and his family. Animo!! You’re going to win this game!