With just over a month to go until the close of business, which clubs are shaping up nicely for the new season and who still have plenty of work to do?

The summer transfer window will often make or break a team’s season before it has even begun. Failure to improve your squad can have a devastating impact and once the market closes on September 2 there is no going back.

With Europe’s top leagues kicking off in August, the majority of business is usually conducted in June and July. If you wait too long, you risk missing out on your primary targets and being left on the shelf. However, some transfer directors, such as AC Milan’s Adriano Galliani, will often play the waiting game in the hope of picking up a last-minute bargain to transform their squads.

There is still over a month to go for clubs to enhance their rosters, but who have been the winners and losers of the window so far? Below we take a look. 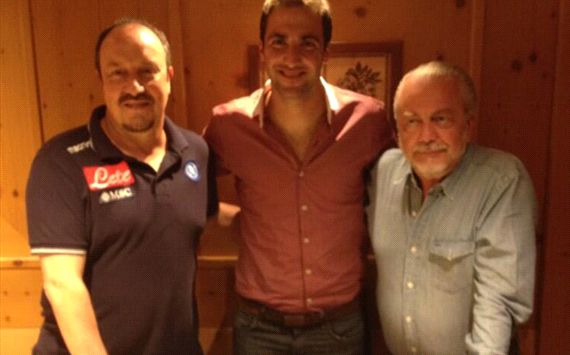 In 2001, Juventus invested the money from Zinedine Zidane’s sale to Real Madrid to construct a new cycle with Gianluigi Buffon, Lilian Thuram and Pavel Nedved. Napoli look set to do something similar this summer after trading Edinson Cavani to Paris Saint-Germain for a mammoth €64 million.

While the Partenopei may have paid over the odds on some of their new-boys, there can be no doubt that they are a much stronger and deeper squad than last season after the captures of Gonzalo Higuain (to be confirmed on Friday), Jose Callejon, Dries Mertens, Raul Albiol, Pepe Reina, Rafael and young Croatian starlet Josip Radosevic. And Napoli’s spending spree is far from finished, with president Aurelio De Laurentiis confirming a budget of €124.5m. Porto goal machine Jackson Martinez could be the next addition to the San Paolo revolution.

Fiorentina are fast becoming everyone’s favourite second team – and with the irrepressible David Pizarro, Borja Valero and Juan Cuadrado pulling the strings the Viola played arguably the most entertaining football in Europe in 2012-13. The uninitiated may have written off Vincenzo Montella’s men following the sale of top-scorer Stevan Jovetic to Manchester City, but the truth is that the Montenegrin has not progressed since his cruciate ligament injury in 2010 and he will not be missed.

Indeed, Fiorentina have bagged one of the continent’s most prolific goalscorers in Bayern Munich’s Mario Gomez for almost half the fee received for Jovetic. Add Giuseppe Rossi and Adem Ljajic into the mix and Fiorentina boast real offensive firepower. The signing of Palermo’s Josip Ilicic – one of Serie A’s most exciting and creative midfielders last term – for just €9m is another impressive transaction for a team that will be a dark horse for the Scudetto and, if they take it seriously, a potential winner of the Europa League.

Barcelona may have made the headline signing of the summer in Brazilian superstar Neymar, but it is Real Madrid who have executed the smarter transfer strategy thus far. To receive almost €60m from Napoli for the expendable Gonzalo Higuain and two fringe players in Jose Callejon and Raul Albiol is fantastic business. These funds will now be used to sign at least one world-class player, with Tottenham’s Gareth Bale and Liverpool’s Luis Suarez at the top of Carlo Ancelotti’s shortlist.

The Blancos have already snapped up Malaga wonderkid Isco, who could potentially develop into the best player in the world, and one of the stars of the Euro Under-21 Championship in Real Sociedad midfielder Asier Illarramendi. Madrid’s full-back problem position could also be solved by the return of Dani Carvajal, who was arguably the best right-back in the Bundesliga for Leverkusen last season. Should things go to plan between now and the end of the window on September 2, Real Madrid will be favourites for La Liga and Bayern Munich’s most realistic challengers for the Champions League.

Borussia Dortmund captured the hearts and minds of the neutrals last season en route to the Champions League final and were subsequently expected to be raided by Europe’s richest clubs. However, BVB have done outstandingly well to only lose one first team player – Mario Gotze, who joined bitter rivals Bayern Munich after they triggered his €37m release clause.

Gotze has been replaced by an attacking midfielder almost equally as effective in Shakhtar’s Henrik Mkhitaryan, who scored 32 goals last term for club and country. Dortmund have also added depth in defence and attack with the respectable signings of Werder Bremen’s Sokratis Papastathopoulos and Ligue 1’s second top-scorer Pierre-Emerick Aubameyang from Saint-Etienne. The Germans have made a profit of €5m and have plenty of money to spend should they wish to further delve into the market.

Monaco have joined Paris Saint-Germain as a European superpower this summer having already splashed €144m on new players – most of it on Porto stars James Rodriguez and Joao Moutinho, and Atletico Madrid striker Falcao. PSG themselves have opened their chequebook to the tune of €110.9m. Having signed Edinson Cavani from Napoli for €64m, Ligue 1 now boasts Europe’s two deadliest penalty box strikers.

The Parisians also snared the world’s most impressive teenage defender in Marquinhos from Roma and Lille’s promising young left-back Lucas Digne. Monaco and PSG have well and truly put Ligue 1 back on the map, and the pair brag the financial power to blow away almost any European rival. It’s an ominous sign for the rest of the continent. 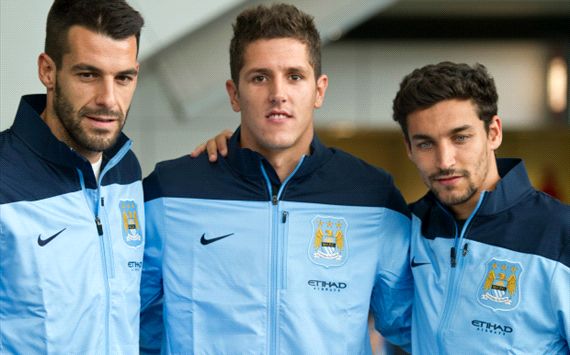 The Premier League was expected to be the big winner of the summer transfer window as a result of its astronomical new television deal, which will supply a total of around £5.5 billion [€6.4bn] in broadcasting rights over the next three seasons. With the league champions set to earn around £100m [€116m] in 2013-14 just from broadcasting, England seemed a certain destination for many of the globe’s top stars.

But while the increased revenue has led to lesser lights such as Norwich and Swansea capturing the likes of Ricky van Wolfswinkel, Leroy Fer and Wilfried Bony, the big guns in the EPL have been painfully frustrated. Virtually every established, top-class target – for one reason or another – has evaded last season’s top four. Mario Gotze, Thiago Alcantara, Isco, Edinson Cavani, Radamel Falcao, Robert Lewandowski and Gonzalo Higuain – to name just a selection. Arsenal are yet to spend a penny, Manchester United are destined to endure an unfulfilled window, while the league’s two best talents – Gareth Bale and Luis Suarez – are not guaranteed to remain on British shores.

Manchester City were always going to loosen their belts after last season’s trophyless campaign led to the departure of manager Roberto Mancini. But the Italian’s successor Manuel Pellegrini has been hung out to dry by a reckless spending spree. Having already disposed with €111m, only Monaco have spent more this window. Yet City’s current squad is arguably weaker now than it was when it flopped so horribly in Europe last term.

The signings of Alvaro Negredo and Stevan Jovetic at a combined cost of over €50m smacked of desperation following the failure to capture primary targets. These are forwards far inferior to their predecessors Mario Balotelli and Carlos Tevez who departed for just €28m. Brazilian midfielder Fernandinho, at €40m, was also horribly overpriced and only Sevilla winger Jesus Navas at €20m can be regarded as good business. All of City’s arrivals will perform adequately, but a club with the ambitions of challenging for the Champions League must set the bar much higher. Pellegrini’s men are currently light-years behind Bayern and Real Madrid.

AC Milan and Inter need to get their skates on if they are to not only close the gap on Serie A champions Juventus but also slow down the rapid ascent of Napoli and Fiorentina. Milan, having controversially sneaked a Champions League place, have been typically quiet so far. Andrea Poli, Riccardo Saponara and Jherson Vergara all have the potential to be fine acquisitions, but if the Rossoneri are to topple Juve and make an impact in Europe again they need a couple of big-name purchases, particularly in the centre of defence. Vice president Galliani always waits until the end of the market to secure a blue-chip bargain, but this is a risky strategy.

Inter have been far more active than their city cousins as they aim to rebuild a squad that limped to a disastrous ninth-placed finish last season. New coach Walter Mazzarri has renewed optimism but in truth the summer acquisitions offer no guarantees. Experienced arrivals Hugo Campagnaro, Marco Andreolli and Juan Carrizo will add little, while young prospects Ishak Belfodil, Mauro Icardi, Ruben Botta and Diego Laxalt possess an average age of 21. Unless Inter sign a few established names – which may hinge on Massimo Moratti selling a controlling stake to Indonesian investor Erick Thohir – there is little chance of Inter reclaiming a Champions League place.

Malaga were a surprise success in the Champions League last season and were seconds away from reaching the semi-finals, despite a summer of austerity that saw them lose a host of stars, including Santi Cazorla, Jose Rondon and later Nacho Monreal, who joined the former at Arsenal in January.

This summer window has been even more depressing than last year as having already given up their world-class coach Pellegrini, the Andalusians have seen their squad disintegrate through the departures of Isco, Joaquin, Martin Demichelis, Jeremy Toulalan, Julio Baptista, Javier Saviola and many others. With only a few modest names arriving, Malaga will do well to even make it into the top half of La Liga in 2013-14.

The Eredivisie has developed into a feeder league in recent years and has taken some big punches again this summer. Not only did the championship lose five of last year’s top seven goalscorers – Bony, Jozy Altidore, Sanharib Malki, Dries Mertens and Jeremain Lens – high-profile names such as Marco van Ginkel, Leroy Fer, Nacer Chadli and national team captain Kevin Strootman all departed Netherlands too.

The one positive was wonderkid Adam Maher’s decision to reject an overseas transfer in order to continue his development at PSV, but the Eredivisie has no chance of playing a serious role in Europe in 2013-14, epitomised by Utrecht’s embarrassing exit to Luxembourg side Differdange in the second round of Europa League qualifying. This will be another devastating blow for the Dutch coefficient this year as there were 19 better-performing nations in the Champions League and Europa League last season.