By Paul Macdonald at Dean Court

“Dad, do you think I’ll be able to get Ronaldo’s phone number?”

A young lad, kitted out in white and gold, can’t wait for his hero to arrive, and begs his father to put him on his shoulders so that he can see the teams entering the main reception. It’s pre-season in Bournemouth, and Real Madrid are here.

Quite why the Spanish giants have chosen to stop off on the south coast of England as part of their preparations isn’t entirely clear, but the locals aren’t bothered. Football’s A-list are here for a few hours – it doesn’t happen every season.

Dean Court officials installed a temporary stand during the week to meet ticket demand (even at the somewhat expensive £60 each), taking the capacity to 12,000, and about a quarter of those arrived hours in advance for the ceremonial arriving of the team bus. There are as many Madrid shirts among the under-12’s as there are backing the home team.

Few sides in the world justify a rock star entrance, but Real Madrid, bus edging through the throngs of amateur photographers with cameras in the air, are one such entity. Even the sight of a tinted window, well aware that their heroes are inside, raises a rousing reception. There are more than a few Spanish voices in the surrounding area as well, everything adding to the sense of spectacle despite the non-competitive nature of the fixture.

For the locals, this is a once-in-a-lifetime opportunity to see Ballon d’Or winners at their humble home, multi-million pound stars preparing for another long season. One local outside the stadium tells me that his son plays for the Bournemouth academy side, and for Ronaldo to simply walk through the building means everything to him.

But Real Madrid are like a band on the road; they get in, perform, and get out. They trained in Spain on Sunday morning before flying in, and their bus arrives little more than an hour before kick-off. 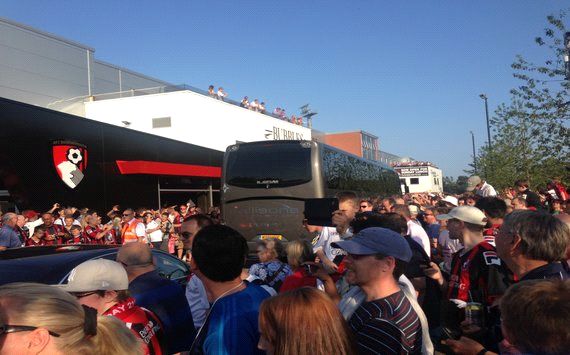 Carlo Ancelotti, names Ronaldo, Karim Benzema, and Isco in his starting line-up. Every touch from this trio during the warm-up receives rapturous applause.

When the match commences, the Portuguese ensures that the term ‘exhibition match’ is strictly adhered to. For 20 minutes he is insatiable, flicking, backheeling, sprinting and shooting in an unconventional but utterly entertaining manner. This is a relaxed Ronaldo, departing from his clinical self to ensure the admission fee is justified. The ‘oohs’ and ‘aahs’ permeating through the stands concur.

Ronaldo is undoubtedly a showman, and he gives the people what they want. Placing the ball down 30 yards from goal, he lashes home in his own inimitable style, bending over the wall and into the bottom corner. The crowd rises to their feet in appreciation, and a few personal ambitions are realised.

The team in white find their stride. Ronaldo nonchalantly makes it two, dancing through to roll home, then pushes out his chest in self-satisfaction. Watching him in action, it seems that the laws of pre-season don’t apply to him. He appears as lean, fit, and strong as he does in the midst of a campaign, standard of opposition taken into consideration.

Sami Khedira adds a third, and when Madrid send out an entirely new XI for the second half, the crowd are given the opportunity to watch Kaka, Gonzalo Higuain and Angel Di Maria strut their stuff on the Dean Court turf. Higuain takes roughly 45 seconds find the net, and the gasp that circles the stadium when Kaka cracks the crossbar reminds all of the quality on show. Di Maria soon adds a fifth while Casemiro completes the rout shortly before the final whistle. The fans’ thirst for entertaining, exciting football has been suitably satisfied.

The scoreline was always irrelevant, however. For Madrid, it’s an economical display, an efficient way to edge towards match fitness. But for Bournemouth fans, it’s the memory of the day that Ronaldo came to put on a show, for one night only.