It’s been a seismic week for European football. Tuesday was Bayern Munich’s day. With a 4-0 win over Barcelona and the audacious capture of Mario Gotze from arch-rivals Borussia Dortmund, it seemed as though the future was theirs and BVB would fall away.

Wednesday was entirely different though. With La Liga still reeling from the extraordinary result the night before, Real Madrid had the chance to restore Spanish pride at Signal Iduna Park. But Jurgen Klopp’s side proved their worth, running out 4-1 winners over the Spanish champions.

What Dortmund have done in recent years is nothing short of phenomenal. On the brink of complete bankruptcy less than a decade ago, they now have a foot in the door of the Champions League final – and it is all their own work.

The deposed German champions have not had the benefit of a billionaire benefactor or a big-name coaching appointment – indeed many had severe doubts that Klopp would be able to lift the club back into the upper-echelons of the Bundesliga. What they’ve done since then is show the true value of spirit. 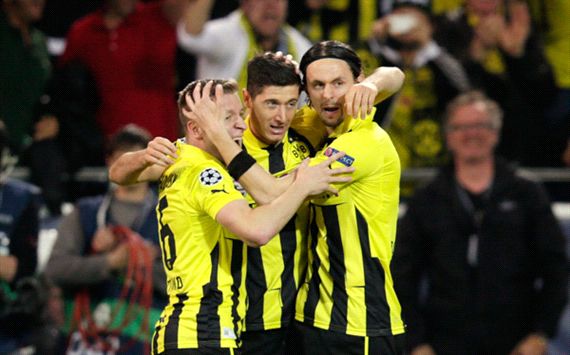 In many ways, BVB are the complete antithesis of Madrid. A club famed for their Galacticos projects, the Spanish giants have made a habit of buying the best players on the planet. From Alfredo Di Stefano to Cristiano Ronaldo, a swathe of the game’s greatest-ever players have plied their trade at the Santiago Bernabeu at some point or another.

The current Borussia Dortmund side, however, are based around youth. Nuri Sahin, the mastermind behind their 2011 Bundesliga triumph was a local boy who came through the club’s academy and, barring a brief loan spell in the Eredivisie, spent his whole career at the Westfalenstadion before winning a move (ironically) to Madrid.

The next season, without the Turkey international, they had Shinji Kagawa and Robert Lewandowski, bought for a combined €5.1 million, step up to the plate to deliver a second successive title and record a best-ever points tally.

Of course, while BVB were enjoying domestic glory, so were Madrid. Led by the €94m Cristiano Ronaldo, who was ably backed up by other big-money acquisitions such as Karim Benzema, Fabio Coentrao, Sergio Ramos, Xabi Alonso and Angel Di Maria, los Blancos smashed a host of domestic records themselves as they ended Barca’s dominance in Spain.

And you would think that a meeting between two clubs who had enjoyed such great seasons would be an even affair, but it wasn’t. Dortmund pressed and harried their opponents into submission, with Lewandowski, Ilkay Gundogan and Marco Reus delivering superb performances.

It was a true humiliation for Madrid, a team assembled to win a 10th Champions League title. Luka Modric, their major signing of the summer for a hefty €30m was anonymous throughout, nullified and outshone by Gundogan, who cost BVB one sixth of that price.

And, the ridiculous thing is, the Croat was a meagre signing by their standards. Kaka, a player limited to just 10 starts this season, cost more than the entire Dortmund team put together. Mats Hummels, Reus and Gotze combined earn as much as Cristiano Ronaldo does.

As their Decima dream lays in tatters, Madrid may well look at Dortmund in envy. They may be valued at almost twice their German counterparts (€475m to €254m) but they cannot replicate what the minnows have: spirit, passion and togetherness.

Dortmund’s story is one to provide any club with hope. En route to their likely Champions League final, they have disposed of Manchester City and Malaga, two teams backed by Emirati money, and Gazprom-funded Shakhtar Donetsk.

If they were to go on to beat Bayern in the final of Europe’s elite competition, it would almost be poetic. The Bavarians have won the battle for Germany this season and looked to have won the war with the signing of Gotze, but winning the Champions League would be a victory for the everyman.

The title has been monopolised by the economic elite in recent years, with Chelsea, Barcelona, Manchester United and AC Milan among the recent winners, but BVB would be a breath of fresh air, particularly with the Financial Fair Play era coming.

Money can buy you star players, but it can’t buy you echte Liebe.