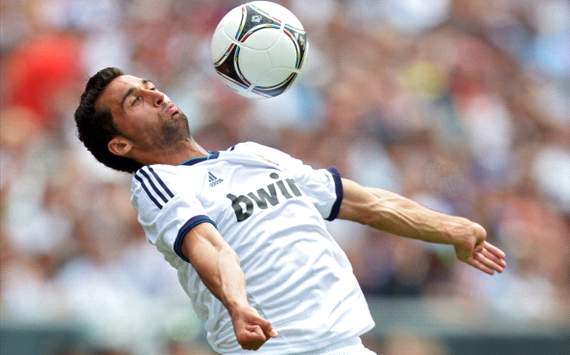 Alvaro Arbeloa has admitted that Real Madrid were not at their best despite a 4-0 thrashing of Zaragoza in La Liga on Saturday.


The Spanish champions appeared to have earned a comfortable victory thanks to goals from Gonzalo Higuain, Angel di Maria, Michael Essien and Luka Modric to move into third place, though they still remain eight points behind Barcelona at the league summit.

Nevertheless, the 29-year-old maintained that the emphatic nature of the Blancos‘ win did not reflect the performance they gave and blamed their fatigued showing on a sudden fixture pile-up.

“We took our foot off the gas.” the former Liverpool defender told reporters after the match. “We’ve had a lot of games recently and we were a little tired.”

Arbeloa also gave his opinion on the furore of the club’s lack of homegrown talent coming into the first team, which Barca coach Tito Vilanova alluded to in a recent press conference.

He continued: “The Madrid fans want their team to win. They don’t want there to be 10 homegrown players and then finish third in the league.”