Few sides in world football can boast a record of such utter dominance over their city rivals as Real Madrid.

It has been 23 games and nearly 14 years since Atletico defeated their more illustrious neighbours in a competitive fixture, a fact which at last season lead to the Madrid Ultras holding up a banner in the style of a classified advert which read “Wanted: Decent rival for a derby”.

This season, however, the Bernabeu faithful may just have got their wish as Atleti come into the match a place above and eight points ahead of Jose Mourinho’s men.

While history is not on their side, recent form very much is, and Bet365 price Atletico at 11/2 (6.50) to break their barren run without a win against Madrid.

With 18 wins from their last 20 games in all competitions, Atletico – it is fair to say – are on a roll. They have also kept five clean sheets in their last five games, a feat only previously achieved once in the 109-year history of the club.

In Radamel Falcao, they have the world’s most coveted No.9 and, in Diego Simone, they possess a manager of fierce intensity. The feeling in Spain is that this season, Atletico will not tamely succumb to their eternal rivals.

With Atleti having scored in 19 of their last 20 La Liga games, and Madrid almost always finding the net at home, both teams to score looks a nailed on selection at 4/7 (1.57). 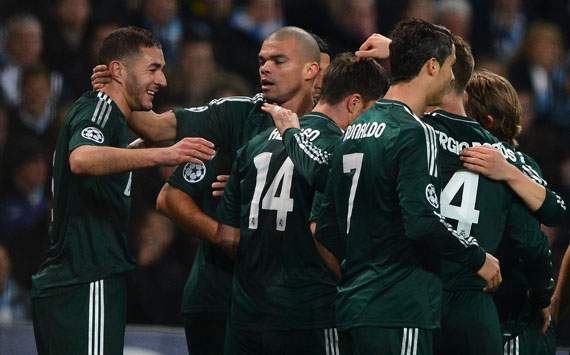 Yet the price is perhaps a little too small for most, so instead consider backing over 1.5 goals to be scored in the first half at 11/10 (2.10).

This bet has paid out eight times in La Liga matches involving Atletico this season, while it has also proved to be the correct selection in six of Madrid’s league games.

Furthermore this fixture has a history of high-scoring first halves with each of the last three matches between the sides at the Bernabeu seeing two goals or more scored in the opening 45 minutes.

For a value bet, try backing Cristiano Ronaldo to claim another high profile hat-trick at 11/2 (6.50). The Portuguese scored three the last time the two teams met and clearly loves scoring in the derby with seven goals in his last five matches against Atleti.

Sign up with for up to £200 in free bets and back Phil’s selections for this match
Phil Kitromilides is a sports broadcaster working on radio and TV in London and Madrid. You can also follow Phil on Twitter.